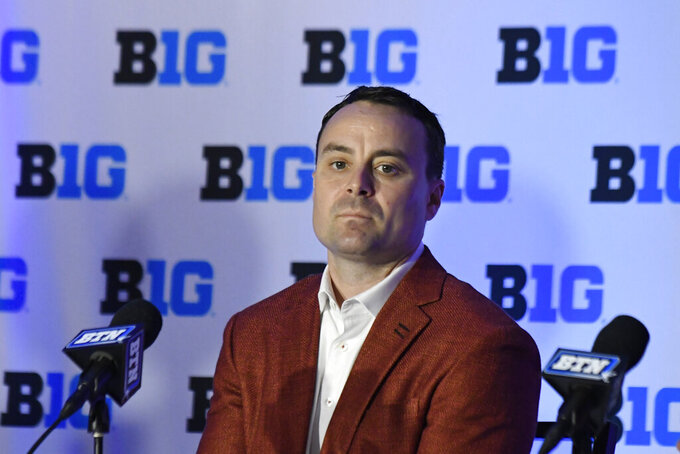 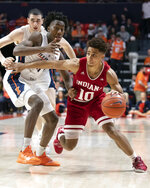 BLOOMINGTON, Ind. (AP) — Rob Phinisee understands the secret to being an effective point guard, how he must find the proper balance between being an aggressive scorer and a creative distributor.

This season, Indiana coach Archie Miller asked his sophomore ball-handler to focus on another critical skill: developing a strong enough voice to help the Hoosiers make some noise in the Big Ten race.

"The younger guys who have gotten a year under their belt have changed," Miller said. "Robert has done a really nice job in our workouts. He's made a concerted effort to communicate better, talk better, not be quiet."

If last season demonstrated anything it was how much of an impact Phinisee can have on the Hoosiers' success.

The 6-foot-1 prep star arrived on campus as one of the feature attractions in a highly-touted recruiting class led by the state's then reigning Mr. Basketball Award winner, Romeo Langford. Both quickly won starting jobs. Both played key roles in a promising start that included Phinisee's decisive buzzer-beating 3-pointer in a 71-68 victory over Butler in mid-December.

Then in the next game, Phinisee took a knee to the head, was diagnosed with a concussion and struggled to regain his early-season form. Over the next 15 games, Phinisee made more than two baskets only once as Indiana went 3-12.

But when Phinisee played well over the final month, so did the Hoosiers, who turned things around and played their back way into the NCAA Tournament discussion. The Hoosiers finished 19-16, falling one win short of the NIT semifinals.

Now, with Langford off to the NBA, Miller needs the naturally soft-spoken Phinisee to become a more assertive leader on the court and an equally vocal leader in the locker room. Phinisee has embraced the challenge.

"I want to be better than I was last season," he said. "Just being a leader really, being a leader with my teammates and I feel like that will take us a long way."

Miller knows it. And so does everyone else around the program as the Nov. 5 season opener against Western Illinois nears.

"He's traditionally a pretty safe guy," Miller said, describing Phinisee's playing style. "He has had a lot of experience under his belt. He's been through a lot in his one year. He's more prepared to handle the communication part of it, and he knows that's a big part of his job."

The most obvious difference between last season's team and this one — size. Adding 6-7 freshman Trayce Jackson-Davis and 6-11 redshirt junior Joey Brunk, a transfer from Butler, gives the Hoosiers a roster with seven players listed at 6-7 or taller. Miller acknowledges going big will have an impact on how Indiana plays this season.

"We have to utilize our versatility with the guys that can play multiple positions," Miller said. "And we are going to have to move that ball. To do that, you're going to have a lot of concepts and action to the way you play. I'm excited to coach this team in that regard."

The Hoosiers believe Franklin can provide scoring punch after he averaged 23.0 points last season at Indianapolis Cathedral. Fans expect Jackson-Davis, the son of former Indiana Pacers forward Dale Davis and a McDonald's All-American, to make the most immediate impact.

But for now, Jackson-Davis is taking things slowly.

"I'm really just focused on getting our team, getting the chemistry down, trying to fit in," he said.

Brunk spent the previous three seasons at Butler, logging his most productive statistics last season when he averaged 7.6 points, 3.6 rebounds and shot 61.7% from the field.

He'll play an important role on the floor, but with five freshmen or sophomores in Miller's projected rotation, Brunk may be more valuable as the voice of experience.

"Because we do have a group of guys that naturally are kind of quiet natured. I think that's where Joey has been a great boost," Miller said. "His personality has really helped our workouts, our locker room."