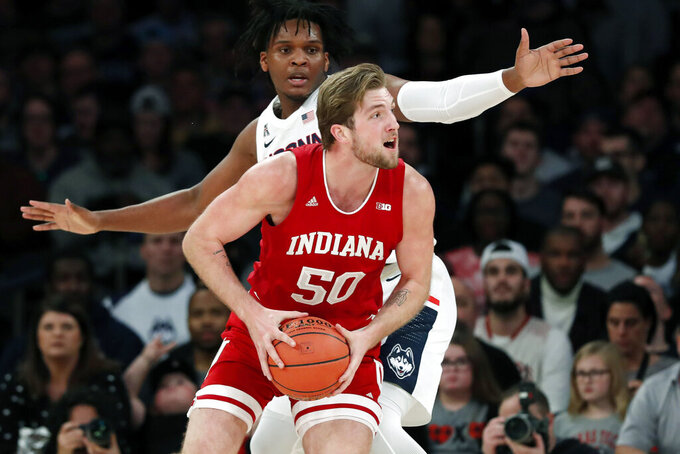 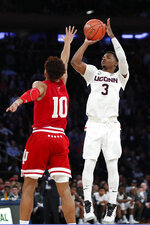 NEW YORK (AP) — Indiana struggled to score, make a string of stops or even rely on its trusty free-throw shooting. Somehow, a game after a crushing first loss of the season, the Hoosiers were headed back home winners.

Indiana failed to have a double-digit scorer and still rebounded from its first loss of the season to beat UConn 57-54 on Tuesday night at Madison Square Garden.

The Hoosiers (9-1) won their first eight games under coach Archie Miller and were on the brink of cracking the Top 25 until a 20-point loss at Wisconsin earned them only a few votes.

“You don't need to get drilled like we get drilled. but you've got to take your medicine," Miller said.

Beating a so-so UConn team may not earn IU any style points but it gutted out a win down the stretch in front of a wild Huskies crowd. UConn gave the Garden an old Big East feel in the Jimmy V Classic.

Alterique Gilbert buried a 3 for UConn with 14.3 seconds left that pulled it to 56-54 but it coughed up the ball on a game-tying possession.

The Huskies had 22 turnovers.

“I just thought it was some carelessness from a couple of individuals," coach Dan Hurley said. “Mostly, it was just guards trying to do things with the ball they shouldn't be trying to do."

Earlier, the crowd erupted into chants of "Let's go Huskies!" when Sidney Wilson finished a thunderous alley-oop that made it 38-all. Josh Carlton's two-handed jam gave the Huskies the lead and Tyler Polley thumped his chest and pointed at the UConn bench when he connected on a 3 that sent the fans into a frenzy. That small surge, though, couldn't be sustained.

IU never had one player step-up as a scorer, and caught a break with 36.7 seconds left when it got possession after a review on a tipped ball out of bounds. Rob Phinisee sank a pair of free throws with 20 seconds left to stretch the lead to five. Aljami Durham led the Hoosiers with nine points.

“If we're about the right things and we play the right way, this team has a chance to be pretty good," Miller said.

Carton led the Huskies with 18 points and Polley had 12.

“You want to have a great season, you've got to win games like this," Hurley said.

The Huskies played their 120th career game at MSG, and they'll add so many more to that total once they return to the Big East. The Huskies were a charter member 40 years ago and set to return in the 2020-21 academic year. UConn is moving basketball and most of its other athletic teams from the American Athletic Conference to the Big East.

The return to the Big East is designed to energize the school's fan base by renewing some of the old rivalries with St. John's, Georgetown, Seton Hall and Villanova.

The Huskies and Hoosiers were long considered two of the top programs in the sport, combining to win nine national championships. But IU hasn't won a title since 1987 under former coach Bobby Knight. The Huskies did win a fourth title in 2014, only to make one NCAA Tournament since that span while the program was reeling from NCAA sanctions levied under former coach Kevin Ollie.

Hurley, in his second season, was tasked with making a smooth transition for the program to the Big East and for the Huskies to become winners again. It's going to be a work in progress.

“We just revert to a way that isn't going to allow you to beat good teams," Hurley said. “It's going to be a season full of excruciating losses if we can't fix that."

UConn: The Huskies hope a three-game homestand can get them back on the winning track.

The Hoosiers have a quick turnaround and host Nebraska on Friday night.

UConn returns to the XL Center to play Saint Peter's on Dec. 18.