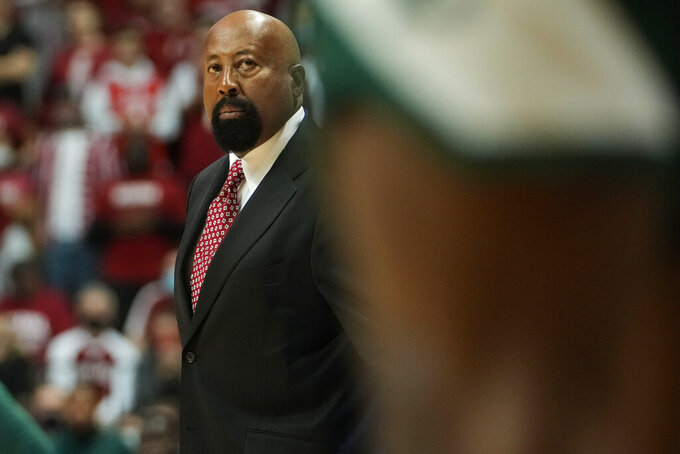 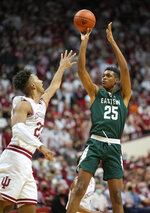 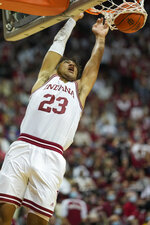 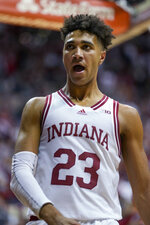 He thought they made a difference, too.

“I know dang near half of our team had never experienced an Assembly Hall crowd before," he said. “They really helped us and I think got them (the Eagles) out of their rhythm, too."

Indiana has won 22 of its last 23 season openers and led this one from start to finish, giving new coach Mike Woodson a win in his first college game after spending the last quarter-century on NBA benches.

For 25 minutes, it looked like the Hoosiers would cruise behind a dominant defense. But after extending the lead to 48-28 with 14:21 to go, things started going awry.

Eastern Michigan scored the next nine points, trimming the deficit to 11. Then Noah Farrakhan started making perimeter shots and when he knocked down a short jumper 2:46 left, capping a 16-3 spurt, Indiana's lead shrunk to 59-58.

“Finally when we start playing a lot better, moving the ball, sharing it, getting better shots that's what ignited our comeback," first-year coach Stan Heath said after his debut. “We showed that we're going to fight and compete and I'm happy with that."

But after struggling at the the free-throw line in the closing minutes, Indiana made just enough to prevent Eastern Michigan from taking the lead.

“It’s good to be back home and the fan base here is like no other fan base," Woodson said. “They stay in the game all the way from the beginning to the end and that's helpful for our young team as we grow."

Eastern Michigan: The second-half was a promising sign for an Eagles offense that had struggled . It took nearly 7 1/2 minutes for Eastern Michigan to score its first points. But they overcame the poor shooting and costly turnovers to make it a contest. The next task is correcting the mistakes that put them in the deep hole.

Indiana: With three new starters, a revamped roster and new philosophies at both ends of the floor, this looked like a completely different team. Yes, the Hoosiers need more offensive consistency to close out wins. But they played tight, strong defense most of the night and that proved to be the difference.

Indiana: Xavier Johnson scored 14 points in his Hoosiers debut. Race Thompson had five points and 10 rebounds. ... The Hoosiers committed just eight turnovers. ... Indiana forced a shot-clock violation on its first defensive possession and also forced a five-second call in the first half. ... The Hoosiers started their 50th season of play inside Assembly Hall on Tuesday. Former coach Bob Knight won the first game in the building, defeating Ball Sate 84-77 on Dec. 1, 1971.

Heath is starting his second coaching stint as a Mid-American Conference coach and in an odd twist, he opened his tenure at his alma mater against the same opponent he closed the first chapter. In 2002, Heath led Kent State to the Elite Eight before losing to an Indiana squad that fell to Maryland in the national championship game. Heath was a backup point guard for the Eagles from 1983-87.