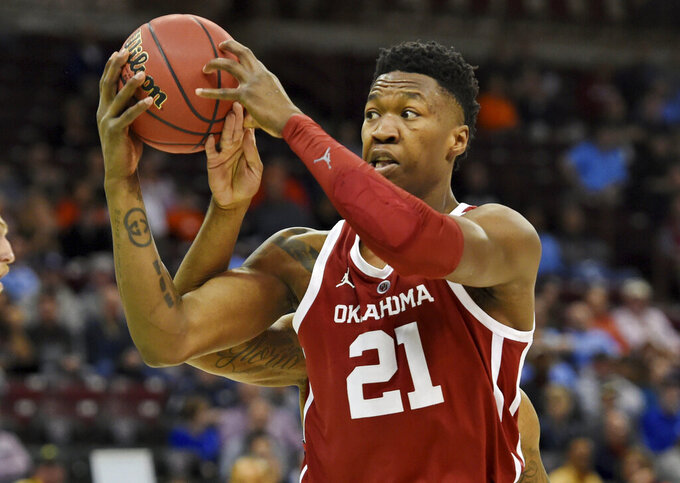 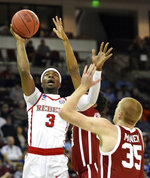 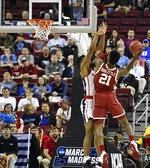 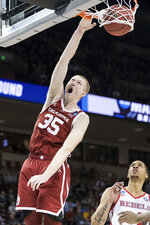 COLUMBIA, S.C. (AP) — Nine days off, a few good practices and shootarounds, and suddenly Oklahoma looks like a new team.

The ninth-seeded Sooners used a balanced attack, with four players scoring at least 18 points, to beat Mississippi 95-72 on Friday in the first round of the NCAA Tournament.

It was a start more often seen by Oklahoma's high-octane football team. The Sooners (20-13) scored on eight of their first nine possessions — the only miss was an alley-oop — and led 12-0 less than three minutes in.

Oklahoma didn't let up. The Sooners led by 17 at halftime and their 95 points were the most this season.

"The ball felt good today," said Christian James, who along with Rashard Odomes led Oklahoma with 20 points each.

The Sooners weren't expected to be in the tournament after losing one-and-done phenom Trae Young, now playing for the Atlanta Hawks. They lost five in a row in the middle of the season, went 4-8 in their final 12 games and lost the Big 12 Tournament opener to 15-20 West Virginia.

Kristian Doolittle had 19 points and matched a career-high with 15 rebounds.

Doolittle said the practices since the Sooners lost their opening game in the Big 12 Tournament to 15-20 West Virginia were some of the most energetic and productive Oklahoma has had all season.

"We've been having great energy, locking it in and making shots," Doolittle said.

The Rebels (20-13) have looked like a tired team for more than a month, and eight days off didn't appear to help. Ole Miss lost five of its last six and let four of those opponents shoot better than 50 percent.

Young drove over from Atlanta to watch his former teammates. He was quickly mobbed by fans, and even Grant Hill left his broadcast spot courtside to chat with the NBA rookie.

Oklahoma coach Lon Kruger saw him, too, and appreciated the gesture. He said he has had to change his coaching style after Young led the nation in scoring and assists.

"A lot of things revolved around him. Here we've got a situation where we have more balance and need more guys contributing," Kruger said. "It's the other extreme."

Oklahoma's 95 points don't even crack the top five games for the Sooners in their 32 NCAA Tournament appearances.

Remember Billy Tubbs' run-and-gun Sooner teams of the 1980s? They topped 95 points five times, including a school-best 124-81 win in the second round of the 1989 tournament over Louisiana Tech.

Oklahoma: The Sooners scored 44 of their points in the paint, which combined with 6 of 13 shooting on 3-pointers means they can play with anyone the rest of the way. The key to Friday's victory may have been Brady Manek. He had 18 points, and Oklahoma outscored Ole Miss by 33 points when the 6-foot-9 senior was on the floor. He shot 7 of 9 and was 2 of 3 on 3-pointers.

Mississippi: The Rebels were picked to finish last in the Southeast Conference after Davis took over a team that went 12-20 in Andy Kennedy's final season. A run to the NCAA Tournament — only Ole Miss' third appearance in the last 17 years — is a surprisingly good season, even if it did end in a 23-point loss.

Oklahoma advances to play the winner of No. 1 Virginia and No. 16 Gardner-Webb on Sunday.