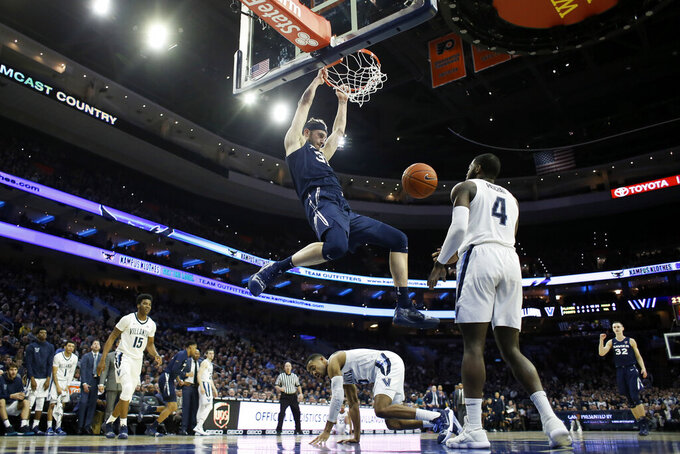 Xavier's Zach Hankins (35) hangs from the rim after a dunk during the first half of the team's NCAA college basketball game against Villanova, Friday, Jan. 18, 2019, in Philadelphia. (AP Photo/Matt Slocum) 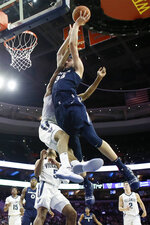 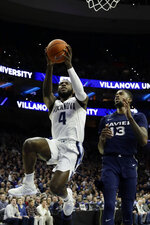 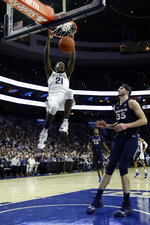 PHILADELPHIA (AP) — Midway through the second half against Xavier, Villanova's Phil Booth launched a 3-pointer that bounced high off the rim before dropping through the net.

Things are just falling the right way for Booth and the Wildcats right now.

Eric Paschall added 17 points and eight rebounds for the Wildcats (14-4, 5-0 Big East), who shot 50 percent from the field and made 15 3-pointers to remain the only unbeaten team in the conference.

Tyrique Jones led Xavier (11-8, 3-3) with 21 points and 12 rebounds while Naji Marshall scored 15. The Musketeers were coming off come-from-behind wins over Georgetown and Butler.

Trailing by 11 early in the second half, Xavier went on an 8-0 run, capped by back-to-back 3-pointers from Marshall and Ryan Welage, and pulled within one on Paul Scruggs' 3 with 10:56 remaining.

Booth and Jermaine Samuels combined for the next eight points, with Booth getting the shooter's bounce on a pivotal 3-pointer with 9:35 remaining. Gillespie helped seal the win with his third 3-pointer of the half to put Villanova up 67-55 with six minutes left.

Gillespie shot 6 for 10 from 3-point range while Booth, who's scored at least 20 points in each of his last four games, made 5 of 9 attempts from behind the arc.

"The scoring part doesn't really matter," said Booth, a fifth-year senior who played key roles on Villanova's 2016 and 2018 national championship teams. "I think a lot of guys can score. I'm just embracing the journey on this team."

The first half was a study in contrasting styles as all but three of Xavier's points came in the paint while Villanova made eight 3-pointers on 18 attempts. Zach Hankins, a 6-foot-11 graduate transfer from Ferris State who was the 2018 NABC Division II Player of the Year, paced Xavier with all 12 of his points before the break.

Xavier's first-year coach Travis Steele was disappointed with himself for not keeping Hankins on the floor as much in the second half, but was happy with how his team handled itself in front of more than 12,000 fans at the Wells Fargo Center.

"It gives me confidence as a coach that we can compete with anyone in this league," Steele said. "I'm proud of the way our guys fought all the way to the last second of the game."

Xavier: The Musketeers, who edged 'Nova for the 2018 Big East regular-season title, now have as many losses in the league as they did all of last season. They are winless against Villanova on the road in six tries since the inaugural season of the reconfigured Big East in 2013-14.

Villanova: Chasing their fifth Big East regular-season championship in six years, the Wildcats moved a full game ahead of second-place Marquette. They returned to the AP Top 25 this week for the first time since mid-December.

The Wildcats were without a key inside presence as the team announced before the game that 6-foot-9 freshman Cole Swider will be sidelined indefinitely after fracturing a bone in his right hand during practice on Thursday.

"This was the game we needed him," Wright said. "We're going to miss him. We've got to hold the line until we get him back."

While Villanova shot 15 for 34 from 3-point range, Xavier only went 6 for 18 from behind the arc, including a 1-for-7 clip from Marshall.

"That's been a little bit of an Achilles heel for our team this year," Steele said.

HOME (NOT FAR) AWAY FROM HOME

Villanova is now 30-3 at the Wells Fargo Center, the home court of the Philadelphia 76ers, since the start of the 2012-13 season.

The Wildcats have three more games in their off-campus home this season, facing Seton Hall, Georgetown and Butler.