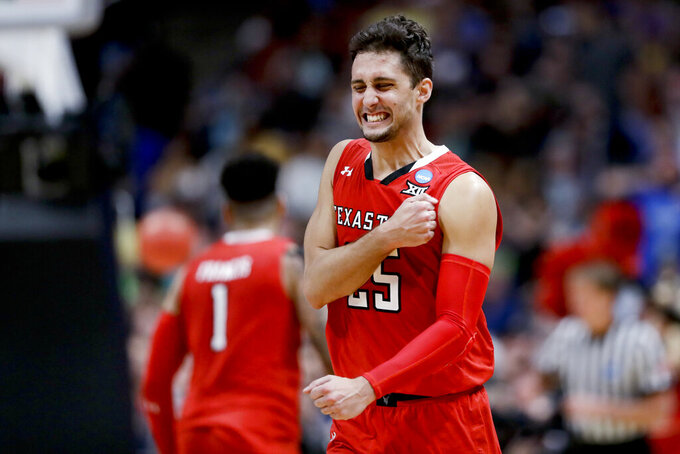 With a simple stop for one of his coveted breakfast burritos on the way to work, the fourth-year coach is reminded that the Red Raiders took Virginia to overtime before losing in the NCAA championship game last season.

"Where I like to go, you have to ask for the salsa. They charge you for it, which is a little bit ridiculous," Beard said, once again launching into a story about food to describe the path to have from have-not in his coaching career.

"The first year when we weren't an NCAA Tournament team, I would forget to order the salsa, I'd have to wait back in line," Beard went on. "The lady would charge me $0.30, $0.33 with tax. Some mornings I wouldn't have cash, which is a common thing. Take my credit card out, run it for $0.33 for salsa."

Then Texas Tech went to the Elite Eight for the first time in school history in his second season.

"Now I don't have to wait in line, she calls me up. I still have to pay for it," Beard says, smiling.

And finally, the trip to the Final Four and the title game.

"Now I'm pleased to say I get free salsa," Beard concludes, drawing laughter from reporters at Big 12 media days. "If we would have beat Virginia, maybe I could have gotten a free burrito."

Before the burrito woman in Lubbock and people around the country were paying attention, Beard built a reputation as a winner by essentially starting from scratch every season.

Graduate transfers have often been the keys to reloading jobs under Beard, who got a new contract worth $4.575 million through the 2024-25 season.

With only one returning starter in guard Davide Moretti of Italy, the names to watch this time are Chris Clarke (Virginia Tech) and T.J. Holyfield (Stephen F. Austin) after Tariq Owens and Matt Mooney filled important roles last season.

Holyfield played against the Red Raiders in the first round of the tournament in Dallas two years ago, when he averaged 12.9 points, 6.4 rebounds and 1.3 blocked shots. The 6-foot-8 forward was a redshirt at SFA last season because of injuries.

Clarke, who could be the most versatile player in Beard's rotation, was preaching his coach's mantra at media days: defense. Beard is trying to temper expectations with the pair after the scoring and steady hand from Mooney and shot-blocking from Owens last season.

"What does have to happen is they have to meet expectations," Beard said. "There is no backup plan. Those guys have to be good players for us this season."

Besides four of his top five scorers from last season not returning, Beard has lost an early entrant to the NBA draft the past two years. Zhaire Smith, who left after one season, went 16th overall in 2018. Lubbock-raised Jarrett Culver stayed two seasons before going sixth overall this year.

Whatever strain that puts on a budding program year over year, Beard apparently doesn't see it as a factor.

"I think we're going to be ... part of the fight, both in our conference and nationally this year," the coach said.

Jahmi'us Ramsey led Dallas-area power Duncanville to the Class 6A state title and is the top incoming recruit. Kevin McCullar of San Antonio is a redshirt freshman without quite the same high school pedigree as Ramsey, but is highly regarded nonetheless.

"We were fortunate enough to get Mac last year, came in midsemester," Beard said. "He was able to be a part of our Big 12 season, March experience, going through the tournament all the way to Minneapolis. Redshirted, but I thought he gained valuable experience."

By Larry Fleisher 28 minutes ago
By Jim Hoehn an hour ago
an hour ago
By Hank Kurz Jr. 2 hrs ago
2 hrs ago