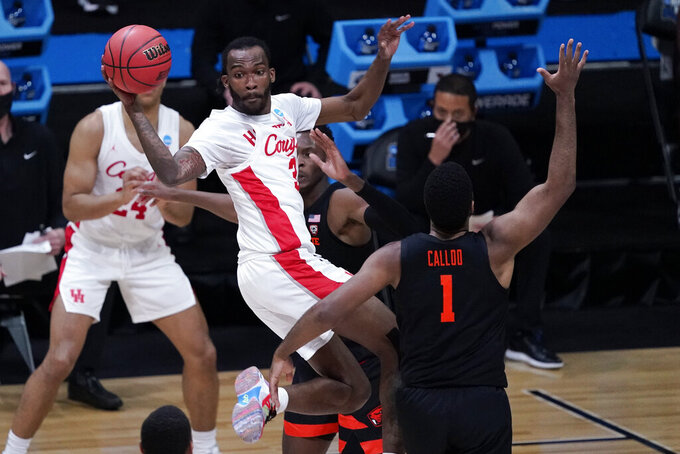 INDIANAPOLIS (AP) — Kelvin Sampson stood atop a ladder and yanked loose the remnants of the net from the rim. He turned toward the red-clad Houston fans and started pumping his right fist, the net clutched in that hand the entire time.

Years of building a once-proud program back to prominence, of putting together a formula that was about way more than flashy offense — it all led to this breakthrough moment for Sampson and the Cougars.

Yes, Houston is going back to the Final Four for the first time since the famed “Phi Slama Jama” era after Monday night's 67-61 win against Oregon State.

“I always thought we could,” Sampson said, “but we had to climb the ladder.”

It was never supposed to be easy to get the second-seeded Cougars (28-3) back into the Final Four for the first time in 37 years, Sampson said. And his team proved him right, blowing a 17-point lead before preventing the 12th-seeded Beavers from adding one more surprising result to a Midwest Region bracket beset by upsets.

Quentin Grimes hit a 3-pointer with 3:21 left to break a 55-all tie, a shot from near the top of the arc that finally steadied the Cougars. And Houston knocked down enough free throws late while holding Oregon State without a basket during a critical 3 1/2 minutes.

That sent the Cougars on to the national semifinals to face Baylor.

Houston shot 29% after halftime and 32% for the game. Yet the performance exemplified the program’s rugged defense-first identity, which had carried the Cougars as far as the Sweet 16 once before in Sampson's first six seasons.

“This is one of the greatest accomplishments I've been around," Sampson said. "And I have this group of players and this staff ... to thank for it. I'm glad they let me go along on the ride with them. It's been a fun ride with this group.”

Marcus Sasser scored 20 points to lead Houston while Grimes added 18. Fittingly, it was DeJon Jarreau — the American Athletic Conference's defensive player of the year who led the effort that stymied Oregon State star Ethan Thompson — who was named the most outstanding player of the Midwest Region.

Jarreau finished with 10 points, eight rebounds and eight assists two days after flirting with another triple-double and shutting down Syracuse's Buddy Boeheim in the Sweet 16.

Maurice Calloo scored 13 points to lead Oregon State (20-13), which was vying to become the worst-seeded team ever to make a Final Four — and to extend a remarkable postseason run for a team that was picked to finish last in the Pac-12. The Beavers dug a 34-17 hole at halftime, then climbed all the way back only to see Grimes put the Cougars back in front.

“It was right there within our grasp with the effort we showed in the second half,” Oregon State coach Wayne Tinkle said. “Really proud of this group. We got every single ounce out of them.”

This will be Houston's first Final Four since Hakeem Olajuwon and coach Guy Lewis led the Cougars to the 1984 title game, in which they lost to Patrick Ewing and Georgetown. When this one was over, Houston's players sprinted to midcourt to celebrate, then migrated to the corner of the court near the Houston fan section and started jumping around — and on top of each other — in a celebratory mob.

Jarreau shared a long embrace with Sampson at midcourt.

“The story's still being written,” Jarreau said. “And we're in the Final Four now.”

Oregon State: The Beavers were 14-12 to close the regular season before making an unexpected run to the Pac-12 Tournament title. That was likely their only path to an NCAA bid, and it opened the door for Tinkle's squad to throw a bit of madness into March in only its second tournament appearance since 1990. The Beavers regrouped by shooting 56% after halftime while committing just two second-half turnovers, but ultimately fell short of the program's first Final Four appearance since 1963.

“This team is full of competitors and winners,” Thompson said, adding: “Tonight just wasn't our night.”

Houston: The Cougars stuck to what got them here. They held the Beavers to 35% shooting in the first half before Oregon State found some openings. The Cougars finished with a 41-29 rebounding advantage and a 19-7 edge on the offensive glass. It was part of the toughness that Sampson has demanded regardless of whether shots were falling. Sampson is in the Final Four for the second time; he took Oklahoma there in 2002.

Jarreau's work on Thompson was a key factor.

The 6-foot-5 senior guard had averaged 20.3 points in the Beavers' NCAA victories against Tennessee, Oklahoma State and Loyola Chicago. He finished with 11 points on 3-for-12 shooting, though he also had seven rebounds and six assists.

Houston is the first team to play four double-digit seeds to reach the Final Four. The highest-rated team they faced was No. 10 seed Rutgers in the second round.

The Cougars face Baylor, the No. 1 seed from the South Region, in an all-Texas semifinal Saturday. The Bears beat Arkansas 81-72 on Monday night, creating a Final Four matchup of former foes from the now-defunct Southwest Conference.