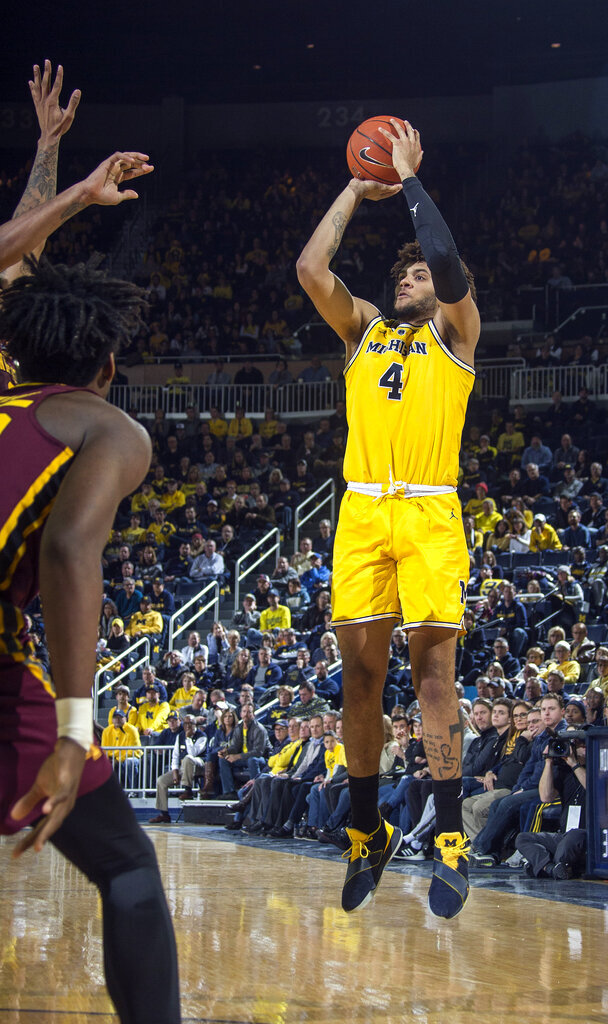 FILE - In this Jan. 22, 2019, file photo, Michigan forward Isaiah Livers (4) attempts a 3-point basket during the second half of the team's NCAA college basketball game against Minnesota in Ann Arbor, Mich. As a freshman last season, Livers shot 36 percent from 3-point range. Decent, but not great. In the offseason, he went to work. “I was shooting at like 37 to 40 on the angle, and that’s not good,” Livers said. “Now I’m at probably 45 to 48.” Livers was referring to the arc on his shots, an area he’s tried to improve using an innovative system from the data-service provider Noah Basketball. This season, Livers is shooting 45 percent from 3-point range, the top mark in the Big Ten. (AP Photo/Tony Ding, File) 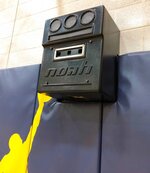 In the offseason, he went to work.

Livers was referring to the arc on his shots, an area he's tried to improve using an innovative system from the data-service provider Noah Basketball. The high-tech setup at Michigan's practice facility can give immediate verbal responses, so a player can hear how much arc was on the most recent shot. This season, Livers is shooting 45 percent from 3-point range, the top mark in the Big Ten.

As teams compete in the NCAA Tournament over the next few weeks, games will be won and lost from the 3-point line and the foul line. The Noah system is an attempt to blend old-fashioned repetition with analytics and technology as players strive to improve their shooting.

John Carter, CEO of Noah Basketball, says there are 45 NBA and college customers that have the new version of the system. The Noah system, so named because of the company's focus on the arc of shots, can actually measure a lot more than that .

Teams can access seemingly endless amounts of data, tracking not only the arc, but where a shot was taken from and where it ended up in relation to the basket. The system can measure if a shot is too far to the left or right — or if it's too short or long.

The best shots, according to the folks at Noah, enter the basket at a 45-degree angle, 11 inches beyond the front of the rim.

"Now that our database has grown to over 180 million shots, what we've found is the number one indicator of a great shooter is left-right consistency," Carter said. "But a close second is arc consistency."

The 11-inch figure may seem surprising, since it puts the shot closer to the back of the hoop than the front.

"Most people still think that the ideal depth in the hoop is 9 inches, because the hoop's an 18-inch hoop. It's not. It's 11," said Alan Marty, Noah's founder and chairman. "If you hit the front of the rim, a lot of them miss, but if you hit the back of the rim and it goes down, they all score."

All this information might seem overwhelming to a college basketball player. Who has time to calculate the exact depth of a shot when lining up a crucial 3-pointer? But a player using the Noah system can take shot after shot — and use the system's instant verbal feedback to make corrections and build muscle memory.

Virginia is another school that uses the system. The Cavaliers are one of the nation's top teams in 3-point accuracy. Associate head coach Jason Williford says aside from all the precise measurements, the system can be useful just for counting shots for each player.

"We monitor how many shots they're taking a day or a week," Williford said. "Are they in there getting up extra ones on their own? It's been good for that."

Williford said sensory overload hasn't been too much of a problem.

One player who is more lukewarm on the system is former Virginia star Malcolm Brogdon, who now plays for the Milwaukee Bucks.

"I used it for a little bit and then fell off it," he said. "The more I watch the game, the more I watch old film, everybody shoots differently. Everybody has different arcs. You've got to find what works for you. I'm a firm believer in that and I don't believe in the perfect shot. You've got to learn how to play the game your way, your style. If you perfect what you do, it'll work."

In that sense, shooting a basketball can be like hitting a golf ball. It's certainly possible for a highly skilled player to succeed using unorthodox methods. Each team can make its own decisions about what information from the Noah system is most useful.

That information will continue to flow. Last week, Noah Basketball and the Pac-12 announced a partnership for the league to use the system at its conference tournaments this year, collecting data that could be useful for teams or broadcasters.

It probably went unnoticed to fans in the arena, but that was another significant step — using the system to track shots for an entire tournament, instead of on a practice court.

"We have a couple real small sensors that's attached to the top of the shot clock. The sensor's literally about the size of my thumb," Carter said. "And from that, we can track all the information."

It's all part of the ongoing effort to help teams learn more about the game's most basic objective — shooting the ball into the basket.