How will NCAA recoup millions from lost tournament? 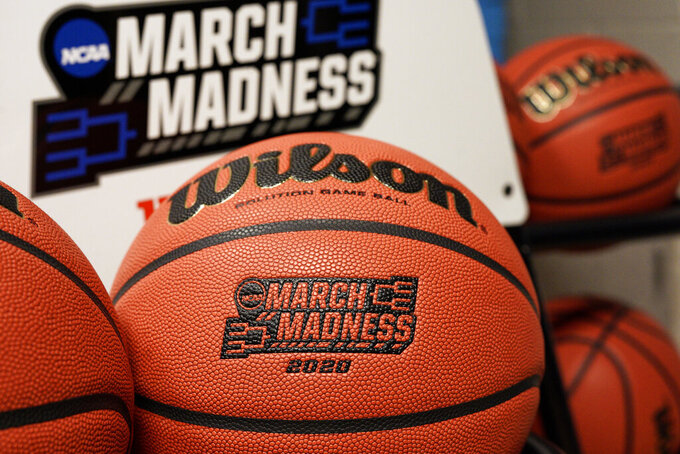 Official March Madness 2020 tournament basketballs are seen in a store room at the CHI Health Center Arena, in Omaha, Neb., Monday, March 16, 2020. Omaha was to host a first and second round in the NCAA college basketball Division I tournament, which was cancelled due to the coronavirus pandemic. (AP Photo/Nati Harnik)

The NCAA made more than $1 billion last year, almost $867 million from the men's Division I basketball tournament, and most of that from a massive television rights deal with CBS and Turner that runs through the 2032 tournament.

The cornonavirus not only wiped out the games, but it will create some unexpected red ink on the NCAA's balance sheet this year. Exactly how much is to be determined.

“Well, I can't give you any specific numbers because we don't know yet,” NCAA President Mark Emmert said. “We know that the financial implications are all negative and we're going to have to deal with those.”

The NCAA canceled the tournament last Thursday because of concerns over spreading the virus. At first, the NCAA announced the games would go on, but the general public would be kept out of the buildings. A day later, the whole thing was scrapped.

The NCAA's contract with CBS and Turner pays about $800 million per year.

It is standard for media rights contracts to have language that relieves rights holders from financial obligations if games are canceled due to events outside the control of the property, said Chris Bevilacqua, co-founder of Bevilacqua Helfant Ventures.

“Typically, those right fees are paid in installments. Let's presume a couple of those installments were probably already paid and the bigger installments haven't been paid because the tournament hasn't happened,” said Bevilacqua, who has advised leagues and college conferences in TV contract negotiations but was not involved in the NCAA's deals.

“I'm sure they have a way to deal with a total and complete cancellation," he said.

Emmert has said the NCAA has business disruption insurance to cover some of its losses.

Bevilacqua said the long-running partnership between the NCAA and CBS, which has aired the tournament every year since 1982, and Turner could help the two sides find a resolution to any outstanding money matters.

“Maybe that allows for CBS and Turner to extend the deal by a year at some favorable rate whenever it ends,” Bevilacqua said.

Sponsorship deals that companies have with CBS and Turner to run advertisements during games are typically structured similarly to the rights fees. If the spots don't run, the sponsors don't have to pay.

Typically, the money flows from sponsors to the networks to the NCAA to the schools.

"Every one of those steps has to be worked through to determine what is going to happen here. And that has to happen in conjunction with the insurance conversation," said Greg Shaheen, a former NCAA executive who oversaw the men's basketball tournament. “And the insurance company is going to, I'm certain, want to say to the association: `You know, we want to make sure that you get every penny you potentially are entitled for out of your contracts before we just roll over and pay some amount.'”

The NCAA distributes 60% of its annual revenue to schools in various ways, including shares called units distributed to conferences and determined by how many teams from a league reached the tournament and how many games those teams won.

The NCAA and the richest and most powerful conferences, such as the Big Ten and Southeastern Conference, should be able to take any possible financial hit that comes from the men's basketball tournament not being played. All the Power Five conferences have billion dollar TV deals, with football as the centerpiece. Not completing their conference basketball tournaments will cost them both in lost box office and lost inventory provided to their rights holders.

“For the top six or eight conferences ... they all have a decent amount of flow through in terms of their regular revenues,” Shaheen said.

Those mid-major conferences, the ones that usually get only one team in the tournament, and rely heavily on the few tournament units they accrue, could really feel the pinch of the lost revenue.

“We have had that question arise, how revenue will be affected?” Atlantic Sun Commissioner Ted Gumbart said. “And the simple answer is, it's going to be affected and we have to realize that it's an unprecedented situation and we may have to make some changes.”