Howard gets hurt, Marquette rallies over Xavier 84-82 in 2OT 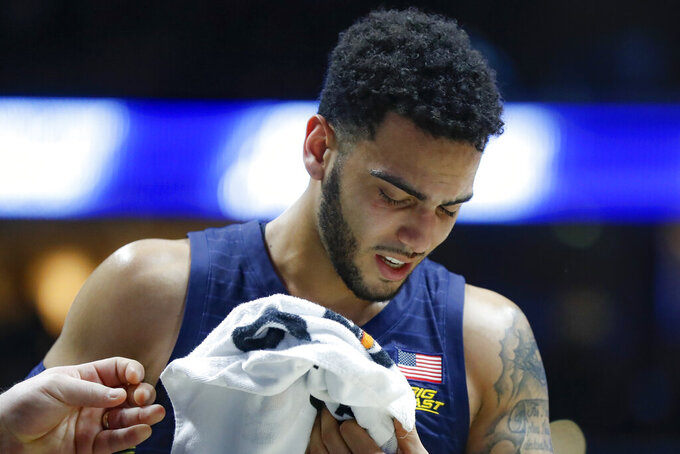 Marquette's Markus Howard walks off the court after sustaining an injury during the second half of the team's NCAA college basketball game against Xavier, Wednesday, Jan. 29, 2020, in Cincinnati. (AP Photo/John Minchillo)

CINCINNATI (AP) — When Markus Howard headed toward the locker room with a bloody nose and 11:15 left in regulation, Marquette's chances seemed to go with him.

Instead, a couple of Golden Eagles took over as shooting stars.

Howard reached a career milestone with his 2,500th point before getting hit in the face, but Sacar Anim scored a career-high 28 points as the Golden Eagles rallied for an 84-82, double-overtime victory over Xavier on Wednesday night.

Koby McEwen scored 17 straight points for Marquette (15-6, 5-4 Big East) after Howard left, keeping the Golden Eagles in it. Anim hit the biggest shots in the second overtime to pull it out.

“When you take the leading scorer in the country out of your rotation, it's going to impact your offense at least for a little bit,” coach Steve Wojciechowski said. “We had a number of guys step up and make huge plays.”

Xavier had a five-point lead when Howard left the game but couldn't take advantage of Marquette losing a player averaging 28.3 points.

“He's one of the best players I've ever coached against,” Xavier's Travis Steele said. “He can beat you single-handedly, he really can.”

It was the second straight overtime game on the road for Marquette, which lost at No. 13 Butler 89-85 on Saturday.

“We all played really hard,” Goodin said. “We gave Marquette everything we had.”

Naji Marshall scored 16 for Xavier, hitting a long 3 that tied it at the end of regulation and a pair of free throws late in the first overtime that made it 68-68. He fouled out in the second overtime.

Anim scored off a drive and hit a 3-pointer that put Marquette ahead to stay 79-76 in the second overtime. His free throw with 2.3 seconds left made it 84-82, and Xavier couldn't get off a final shot.

Marquette: The Golden Eagles got a rejuvenating win, pulling out a second straight overtime game on the road without Howard.

Xavier: The Musketeers played with two starters recovering from injuries. Marshall banged a knee during a loss at Creighton on Sunday and failed to score in the first half against Marquette, taking only two shots. Goodin missed the last two games with a knee injury.

Anim has scored at least 20 points in each of his last three games. McEwen was coming off his first career double with 13 points and 11 rebounds at Butler.

Marquette leads the series 53-24, including four in a row.

After the buzzer sounded to end the first half, Howard swished a shot from three-fourths of the court away. The impressive heave didn't count.

Xavier came into the game last in the Big East in free throw percentage at 67.5 percent and made only 11 of 25. Marquette went 25 of 32 from the line.

“You're not going to win any games at this level going 11 for 25," Steele said. “Never. That's not happening. And we've got to get it fixed.”

Marquette plays three of its next four at home, starting with a game against DePaul on Saturday.

Xavier plays at Seton Hall on Saturday. The Musketeers lost to Seton Hall 83-71 at the Cintas Center on Jan. 8.