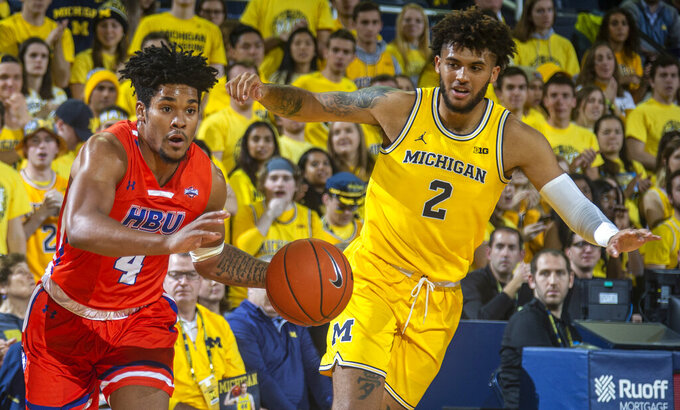 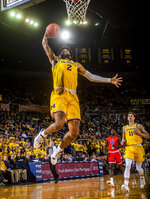 He did it when he finally became an NBA champion player with the Miami Heat in 2012. He did it again the next year, when the Heat won another title and he was transitioning to a coaching life. Heat players like Dwyane Wade were known for doing it at times in tribute to him.

And he did the dance — fists clenched, arms out in front of him, swinging in a circular motion, just as he did in 1992 when Michigan beat Ohio State to get to the Final Four — again last week when Michigan won the Battle 4 Atlantis.

Howard has the Wolverines off to a 7-0 start in his first season as coach at the school where he played. Michigan entered the AP Top 25 at No. 4 on Monday, matching Kansas in 1989 for the biggest jump from being unranked in the 70-year history of the poll.

And what has already been a big week is about to get even bigger: The Wolverines are following up their title run in the Bahamas with a visit Tuesday to new No. 2 Louisville.

“So happy for this dude,” Wade tweeted after Michigan won the Bahamas title.

There’s a whole slew of new Michigan fans inside the building the Heat call home. They’ve been watching the Wolverines whenever they can, and seeing Howard celebrate was cause for Spoelstra to celebrate as well.

“I know he’s dynamic as a human being and it’s his calling to be a mentor,” Spoelstra said. “So to me, it seemed like a perfect fit. He has a passion that just screams out of him for Michigan basketball. It’s real. It’s genuine. He’s following a legend. It’s not easy to do. But he’s a legend on campus and it’s super-unique.”

So far, Howard and a new staff that includes former longtime St. Joseph’s head coach Phil Martelli have made just about every right call in his return to the program where he was part of the celebrated “Fab Five” recruiting class that led Michigan to two straight national-title games a quarter-century ago.

Howard took over when John Beilein left for the NBA a season after guiding the Wolverines to the national-title game. He inherited a team that lost top scorers Charles Matthews, Jordan Poole and Ignas Brazdeikis but hasn’t missed a beat.

“I’ve never been a guy that’s always been about me-me-me, I-I-I,” Howard said. “But I’ve also instilled that in our players, that we have to make each other better.”

The early results have been impressive.

In the Bahamas, Michigan shared the ball and had dominating offensive stretches in wins against No. 6 North Carolina and No. 8 Gonzaga on consecutive days. The Wolverines are playing at a faster tempo, going from averaging 69.6 points last year to 82.4 this year while ranking third nationally in shooting percentage (.529).

Senior point guard Zavier Simpson is leading the country at 9.7 assists per game. Big man Jon Teske was Atlantis’ most valuable player with his scoring, rebounding and interior defense. The versatile Isaiah Livers has blossomed from a complementary role to averaging a team-best 17 points along with growth from Eli Brooks (12.9) and David DeJulius (9.0).

Both Livers and Teske praised Howard’s approach. The 7-foot-1 Teske crediting Howard’s tips for preparing him to play well against strong front lines for UNC and Gonzaga.

“He’s kind of more of a players’ coach where he understands the game,” Livers said. “You can’t play the game if you’re being controlled the whole time. Just go out there and get out and run, little stuff we’ve worked on since the first week of July: hit open shots and run and get the ball to that big fella down there.”

Howard, 46, interviewed for multiple NBA jobs during his tenure as a Heat assistant. It was in a late-night interview strategy session last spring with Spoelstra — who had spent years professing that Howard was ready to become a head coach — when the Heat coach asked him about returning to the Wolverines.

“We were preparing for like his fourth NBA interview, and it just happened in conversation,” Spoelstra said. “I said, ‘What about the Michigan job? Isn’t that open? Would you have an interest in that?’ And his whole face just lit up.”

Spoelstra advised Howard to start calling college coaches that he knew and trusted, the Patrick Ewing and Chris Mullin types.

“And he did,” Spoelstra said. “He closed up shop and went to work.”

Howard wound up getting his dream job. The Wolverines haven’t lost since. And Howard is dancing again.

“The Cabbage Patch dance, though, that’s full circle,” Spoelstra said. “That was epic.”