Howard sheds tears of joy as takes the reins at Michigan 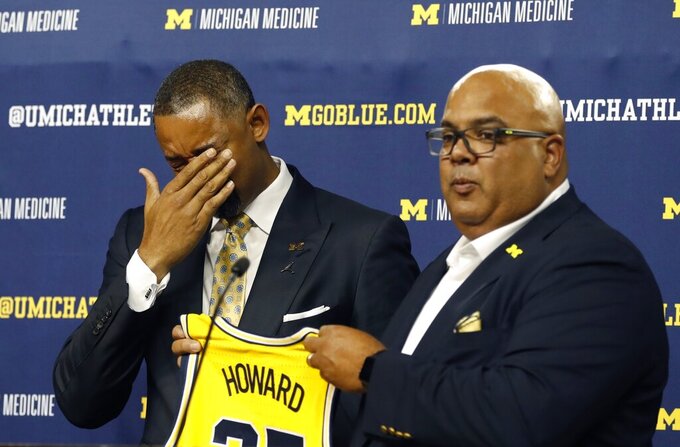 Juwan Howard reacts with tears of joys as he is introduced as Michigan's new men's NCAA college basketball coach by Director of Athletics Warde Manuel, Thursday, May 30, 2019 in Ann Arbor, Mich. The former member of the Fab Five has a five-year contract that will pay him $2 million in his first year. The former Miami Heat assistant coach replaces John Beilein, who left to coach the Cleveland Cavaliers. (AP Photo/Carlos Osorio)

ANN ARBOR, Mich. (AP) — Juwan Howard wiped tears of joy off his cheeks as he sat with his family. Moments later, he was formally introduced as Michigan's basketball coach.

Howard then got up and hugged athletic director Warde Manuel, who triggered even more tears from the former member of the Fab Five. Warde held up a maize No. 25 jersey, like the one Howard wore on the same court in the early 1990s.

When it was Howard's turn to speak, the former NBA standout and Miami Heat assistant coach was so overcome with emotion he needed more than 30 seconds to compose himself.

"I said I wasn't going to cry," he said. "I guess that happens when you're excited about something so special to you."

The 46-year-old Howard is getting his first job as a head coach and he is taking over for John Beilein, who rebuilt the Wolverines into a national power before leaving to coach the NBA's Cleveland Cavaliers. Critics wondered about Manuel's choice, but he defended his first major move in three years by pointing to Howard's passion for the program.

"I'm going to gamble with people who love this place the way he does," he said Thursday.

Howard agreed last week to return to his alma mater, putting aside his own pursuit of an NBA head coaching job. Michigan will pay him $2 million in the first year of his five-year contract.

The school removed the two Final Four banners tied to the Fab Five from the rafters at Crisler Arena as part of self-imposed sanctions. The NCAA in 2003 added more penalties , including 3 ½ years of probation, for what it called "one of the most egregious violations of NCAA laws in the history of the organization."

Howard wouldn't share how it feels to look up and not see the banners he helped the program win. He expressed hope they would be raised again.

"That is something on the table," he said .

Manuel, though, said: "It's nothing that we can change."

Beilein was the leader Michigan needed, running the program without a hint of controversy and bringing the school back to the national title game in 2013 and 2018. The Wolverines also won two Big Ten season championships along with a pair of conference tournament titles while Beilein became the school's all-time winningest coach. His departure was a surprise to many.

Howard, who is from Chicago, played at Michigan for three seasons before Washington drafted him No. 5 overall in 1994. The two-time NBA champion with the Heat and one-time All-Star averaged 13.4 points, 6.1 rebounds and 2.2 assists during his career that ended after the 2012-13 season.

With six years of coaching experience as an assistant, Howard acknowledged doubters and detractors question his credentials.

"You've got to start somewhere, don't you?" he asked.