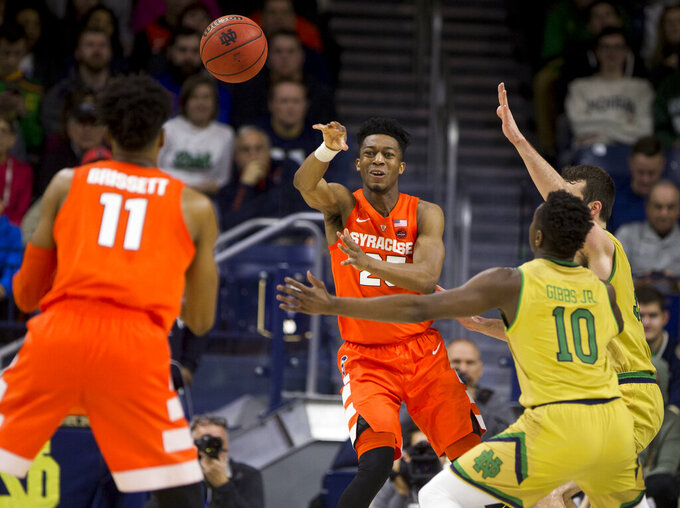 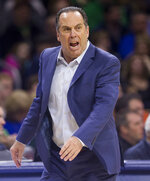 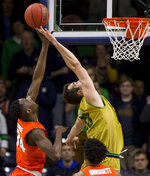 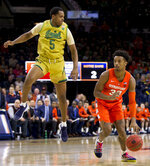 SOUTH BEND, Ind. (AP) — Getting potent production across the board from his Big Three of Elijah Hughes, Oshae Brissett and Tyus Battle — like he got Saturday — is going to prove a necessity more than a luxury this season, according to Syracuse coach Jim Boeheim.

Hughes, a redshirt junior guard, erupted for career highs of 22 points and 10 rebounds as the Orange dominated down the stretch during their 72-62 victory over Notre Dame.

"They have to show up," Boeheim said of the trio. "If they don't show up, we aren't going to win. We depend on those guys. I think Frank (Howard) can score, too. He's not there yet, but I'm hopeful. He averaged 15 points a game last year."

Hughes, who has scored at least 15 points in each of his last seven outings, drained six of 13 shots from 3-point land. His previous high for made triples was four.

John Mooney chipped in his seventh double-double with 14 points and a game-high 14 rebounds.

ND, though, virtually disappeared with game on the line.

The Orange, unfazed by playing just their second true road game of the season, outscored Notre Dame 10-1 late to turn a 60-58 lead at 6:19 to go into a 70-59 spread with under one minute remaining.

The Irish made just one of their final 11 shots from the field.

"I thought the difference again, a little bit like (Tuesday's 81-66 loss at Virginia Tech), was veteran players — men on the other team — made kind of men plays, and we were a little young in some spots trying to figure it out," Notre Dame coach Mike Brey said.

"The league is very unforgiving," Brey said, "as I told them, and as we try to grow."

"When they closed it to two, we had guys step up," Boeheim said. "Elijah stepped up, Oshae stepped up, and I thought Bourama (Sidibe) made two of the biggest plays of the game down there, drawing the charge, getting a blocked shot, then a couple rebounds."

It was the 50th meeting all-time between the former Big East rivals, with the Orange owning a 29-21 advantage.

Syracuse: The Orange have won three straight, and with their next two games at home, have a chance to build momentum toward their next matchup against a ranked team. They haven't played one since falling 71-59 to visiting Buffalo on Dec. 18 and won't face another until heading to No. 1 Duke on Jan. 14.

Notre Dame: It only gets more challenging for the Irish. Four of their next six outings will be against ranked teams, capped by No. 4 Virginia and No. 1 Duke in a span of three days on Jan. 26 and 28 at home.

Syracuse entered the day shooting just 43 percent from the field overall and 29.9 on 3-pointers, but made a season-best 12 baskets outside the arc in 29 attempts for 41.4 percent.

The Orange have hit 47.9 percent from the field overall during their three-game winning streak and 25-of-69 from distance for 36.2 percent.

"It's the same shots we've been getting all year," Boeheim said. "We're just shooting it better."

A delighted Brey confirmed after the game that injured senior captain Rex Pflueger intends to use a medical redshirt to gain another year of eligibility next season with the Irish.

"I'm thrilled," Brey said. "I was sitting at dinner last night with the team after he and I talked, and I looked over and (realized), 'My God, the whole team comes back now.' I don't know if that happens in college basketball, your whole team coming back. Now, guys can always decide to transfer, go pro or whatever, but I think there's a pretty good chance our whole team will come back."

Pflueger, ND's only scholarship senior and its perimeter defensive ace, suffered a torn anterior cruciate ligament in mid-December, sidelining him for the season.

His mom, Rebecca, is battling brain cancer, according to Brey.

Notre Dame: The Irish are off until hosting Boston College next weekend, the second of four straight Saturday home games on their ACC schedule.