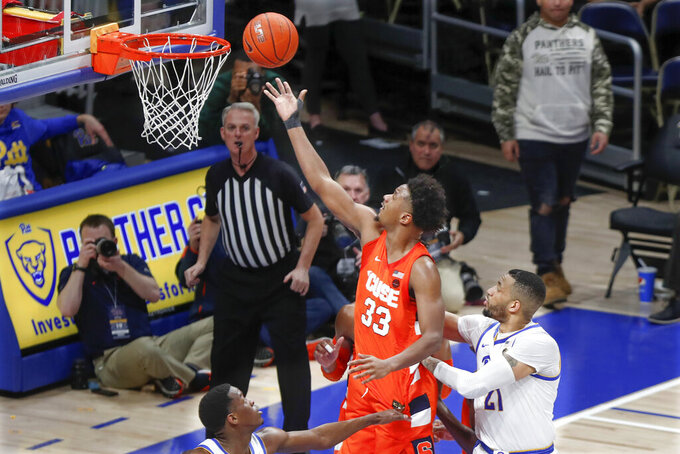 Syracuse's Elijah Hughes (33) scores after getting by Pittsburgh's Terrell Brown (21) during the second half of an NCAA college basketball game, Wednesday, Feb. 26, 2020, in Pittsburgh. (AP Photo/Keith Srakocic) 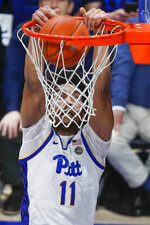 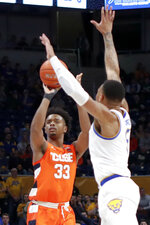 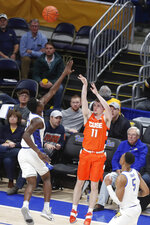 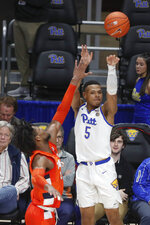 PITTSBURGH (AP) — A month ago, the sight of Buddy Boeheim hobbling to the bench might have left Syracuse shaken. Not so much anymore.

Elijah Hughes scored 25 points, Joe Girard III added 16 and Bourama Sibide chipped in 13 points and 10 rebounds as the Orange smothered Pittsburgh 72-49 on Wednesday night. Syracuse (16-12, 9-8 Atlantic Coast Conference) did it with Boeheim going scoreless in 15 minutes before turning his left ankle while getting tangled up with Panther guard Xavier Johnson. The Orange's second-leading scorer slowly made his way off the court and didn't return.

Syracuse hardly needed him. Not with Hughes getting whatever he wanted wherever he wanted, Girard III knocking down four 3-pointers and Sidibe having his way in the lane.

“To lose Buddy like that, it’s not easy,” Orange coach Jim Boeheim said. “He’s been real steady for us and everybody else picked it up.”

The Orange have won two straight since a three-game slide that ended with a blowout loss at No. 11 Louisville last week. They used their 2-3 zone to suffocate the smaller and uncertain Panthers (15-14, 6-12). Pitt turned it over 17 times, shot just 29% shooting (16 of 55) from the field and had no answer following a 13-2 run by the Orange immediately after Buddy Boeheim's exit.

Justin Champagnie led Pitt with 13 points and 17 rebounds but received little help. The Panthers have dropped five consecutive games and 6 of 7 overall, dulling some of the program's upward trajectory in coach Jeff Capel's second season.

The Orange won the first meeting between the longtime rivals on Jan. 25, riding Buddy Boeheim early then withstanding a serious push by the Panthers to hold on for a 69-61 victory. The Orange led just 24-19 when Boeheim turned his ankle. Yet rather than teeter, Syracuse hit the gas. Pitt went without a field goal over the final 5:55 of the first half as the zoomed to a 37-21 lead at the break.

Hughes, who made 8 of 15 shots from the field and 7 of 8 from the line, beat the Panthers in a variety of ways. He knocked down two 3-pointers and slashed his way to the basket regardless of who Pitt threw at him. Jim Boeheim called it Hughes' best all-around game of the season.

“He hasn’t been shooting well,” Jim Boeheim said. "When he makes (his) shot, he’s hard to defend. He’s had a great year, he’s as good as anybody.”

The Panthers couldn't keep pace. Pitt put together a small surge at the beginning of the second half, getting within 11 at one point but the momentum didn't last. The Panthers looked indecisive against the Orange's zone and either settled for 3-pointers it couldn't make — Pitt hot just 6 of 26 from 3 — or unsuccessfully tried to get to the rim.

“Tonight they couldn’t make anything,” Boeheim said of the Panthers. “When that happens, there’s nothing you can do about it.”

When Girard III knocked down 3-pointers on consecutive possessions, it gave Syracuse a 57-32 advantage. Capel sent in senior Anthony Starzynski — a walk-on who survived — looking for a spark that never arrived. Capel refused to use fatigue as an excuse. It's the end of February, every team in the nation is tired.

Syracuse: The Orange probably need to win their final three regular season games and then make some serious noise in the ACC tournament to have any shot at the NCAAs, but winning so easily with Boeheim a non-factor showcased the kind of depth they didn't have earlier in the year.

Pitt: Capel is still very much in the building phase two years after taking over a team that went winless in conference play the season before he arrived. Of the four players who said goodbye during Senior Night only one — graduate transfer center Eric Hamilton — played significant minutes. The Panthers are still very young, but they also have looked run down of late, similar to last season when they dropped 13 straight conference games.

Pitt: Finish up the regular season with a two-game road trip beginning on Saturday at North Carolina State.