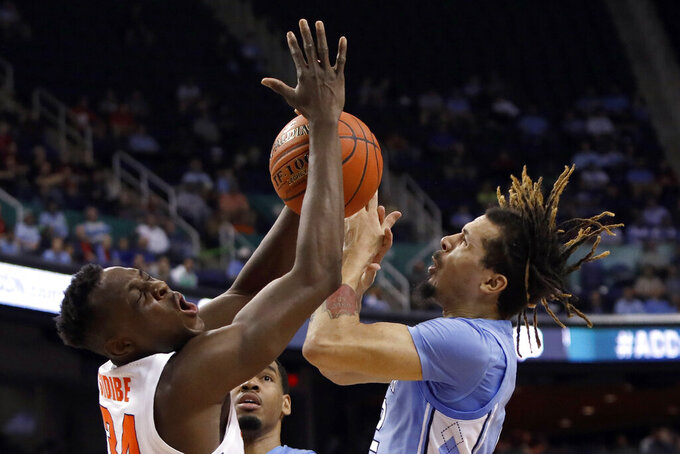 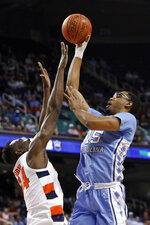 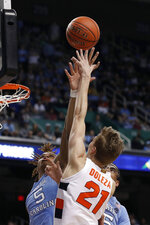 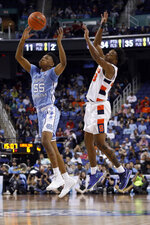 Hughes scored 18 of his 27 points in a dominating first half as the Orange beat the Tar Heels 81-53 in Wednesday's second round of the Atlantic Coast Conference Tournament, handing the Tar Heels their most lopsided loss ever in the tournament.

Hughes had 18 points by the break, including a contested jumper in the final seconds to cap Syracuse’s 15-0 run to close the half. That pushed Syracuse to a 43-22 lead, a margin that never dipped below 16 in the second half as the Orange (18-14) emphatically ended a nine-game losing streak to the Tar Heels (14-19).

The last came less than two weeks ago, with UNC shooting 52% and hitting a season-high 11 3-pointers.

“We came out today wanting to take it a little personal,” Hughes said. “They came to our home court and they beat us, and we just wanted to take it personal.”

Buddy Boeheim added 17 points for Syracuse, which jumped to a 7-0 lead in the first 72 seconds and never looked back. The Orange finished the game shooting 47% and scored 27 points off 18 turnovers by UNC.

“After the game in Syracuse, they just dominated us on the boards and their ball movement, they just got a lot of good looks,” Syracuse coach Jim Boeheim said. “So the one thing we wanted to try to do tonight was to just shore up our defense a little bit better, try to make it a little bit harder for them to get open looks.”

Garrison Brooks scored 18 points for the 14th-seeded Tar Heels, who missed 23 of 31 shots — including all seven 3-point tries — in the opening half as Syracuse took over. Potential one-and-done point guard Cole Anthony, averaging 19.1 points, managed just five points on 2-for-10 shooting.

The Tar Heels finished 33%, including 2 for 16 on 3-pointers. The school said it surpassed the previous record for a losing margin of 26 points set against Duke in the 2001 championship game.

UNC: The Tar Heels entered this tournament as an oddity, a team that reached as high as No. 5 in the AP Top 25 poll in November only to own the lowest seed in this week's tournament after a dizzying array of injuries, blown leads and close losses. They had won four of five coming in, including a win at Syracuse on Feb. 29 and Tuesday's first-round romp against Virginia Tech. But UNC shot terribly, was sloppy with the ball and never slowed Hughes to put itself in an early insurmountable hole that capped the first losing season of Hall of Fame coach Williams' 32-year career as a head coach.

“I told them in the locker room: 'I'm as lucky as you can be. I get to coach,'” Williams said. “That's all I've ever wanted to do. Right now it's not fun. It has been a difficult year. But this is what I want to do.”

Syracuse: The Orange entered the tournament with uncertain NCAA Tournament prospects, but Jim Boeheim’s club will get a chance to earn a marquee win to help its case by advancing past a team that had given it fits. Syracuse earned its first win against UNC since January 2014.

Even with a home-state crowd backing them, the Tar Heels got as close only as 57-41 in the second half on Leaky Black's three-point play at the 11:51 mark. Buddy Boeheim responded with an immediate 3-pointer, ending a feeble rally that turned out to be the Tar Heels' best of the night as Syracuse eventually pushed the margin to 30 late.

The game was the last of four second-rounders Wednesday -- and the last with most fans in attendance.

The ACC has announced it will not allow the general public into tournament games starting Thursday amid concerns about the spread of the new coronavirus that has become a global pandemic.

That means the quarterfinals — featuring No. 4 Florida State, No. 10 Duke, No. 15 Louisville and No. 17 Virginia — will take place with only essential tournament personnel, teams, player guests, limited school administrators and credentialed media present.

Syracuse: The Orange will meet 15th-ranked Louisville, the tournament's 3-seed, in Thursday's quarterfinals.