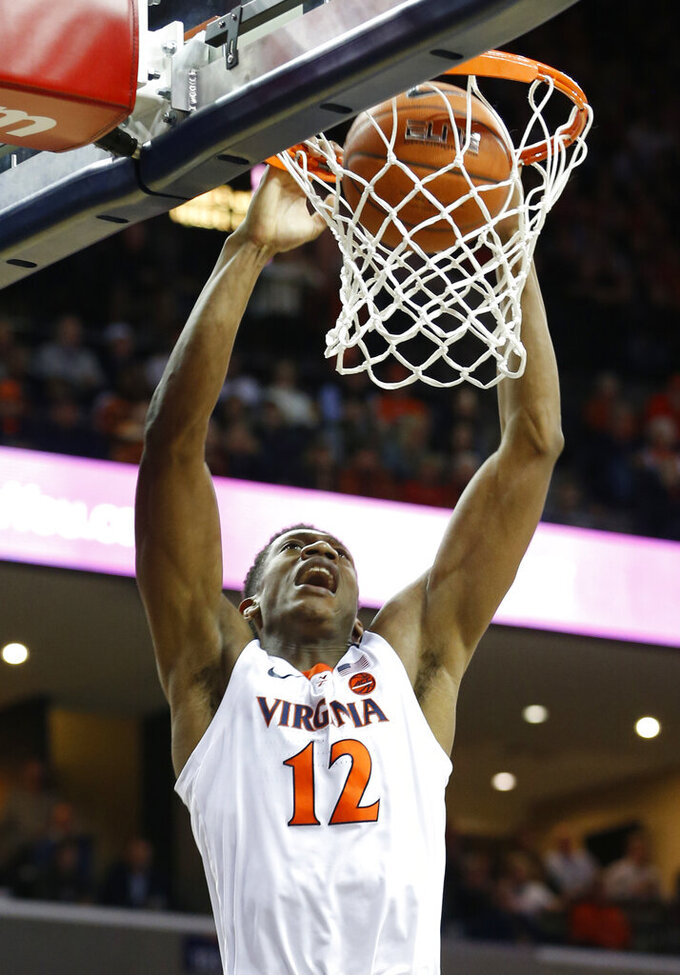 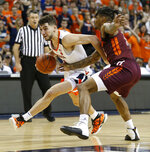 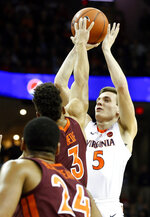 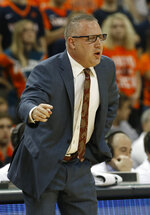 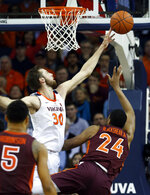 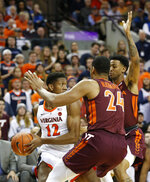 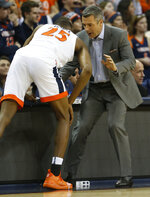 CHARLOTTESVILLE, Va. (AP) — Ty Jerome got No. 4 Virginia off to just the start it needed by making a few deep 3-pointers. That opened things up for De'Andre Hunter and quickly shut things off for No. 9 Virginia Tech.

Hunter scored 21 points, Kyle Guy scored 15 and Jerome had 14 points and a career-high 12 assists as the Cavaliers started fast and routed the Hokies 81-59 on Tuesday night.

"He loosened it up early with some of those long threes," Virginia coach Tony Bennett said of Jerome, who made three 3s, the first from about 25 feet, in the first seven minutes.

With the Hokies stretching their defense, Hunter moved inside, making 8 of 12 shots.

"I just tried to be aggressive in the post," he said. "We knew they were going to trap and when they didn't, when they stopped trapping for some reason, I just tried to take advantage of the dude that was guarding me."

The Cavaliers (16-0, 4-0 Atlantic Coast Conference) never trailed in the first meeting of the programs in which both were ranked in the top 10. Virginia also remained one of two unbeaten teams in the country along with Michigan, which was idle, and did it against their state rival, which came into John Paul Jones Arena a year ago and won 61-60 in overtime.

"For me, it wasn't on my mind at all," Guy said of avenging last year's loss. "I was just trying to focus on what was at hand. ... We punched them in the mouth and they fought back a little bit and we kept our foot on the pedal."

Nickeil Alexander-Walker scored 19 points and Ahmed Hill 14 to lead Virginia Tech (14-2, 3-1), which was seeking the first 15-1 start in program history. The Hokies trailed by double figures after 12 minutes and never got within single digits the rest of the way.

"We were just behind — behind on ball pressure, behind on rotation, behind on stunts," Hokies coach Buzz Williams said. "And with space, categorically, their whole team can make shots."

Virginia could hardly miss in the first half, making 10 of 14 3-point tries, including one by Kihei Clark at the buzzer to make it 44-22.

"I don't think they get off track," Williams said. "I think they are very sound fundamentally."

Virginia Tech: The Hokies arrived in fourth place nationally having made 42.3 percent from 3-point territory and finished 7 for 21 for the game. Virginia Tech also has improved defensively, but the Cavaliers showed them they still have plenty to work on at that end. "I think we've improved," Williams said of the defense. "That did not show tonight."

Virginia: More than anyone else, Jerome sets the pulse for Virginia when he's playing well because of his fire and toughness. His first basket was a 3-pointer from well beyond the 3-point arc and his first half was near perfect. He hit four 3-pointers and had seven assists, giving him a hand in 11 of 17 baskets in the half. His 12 assists eclipsed his previous best by three (Louisville, Jan. 31, 2018).

Virginia has now played host to the No. 9 team in the top 25 and won both games going away.

The Cavaliers also beat No. 9 Florida State 65-52 on Jan. 5 despite the Seminoles scoring the last 16 points of the game.

Jerome appeared to say something in the direction of the Hokies bench after one of his early 3-pointers, but insisted after the game he'd not said a word.

"I didn't say nothing," he said with a smile. He joked that he did, however, say something to the stat keepers regarding their standard for awarding assists.

Virginia Tech: At home against Wake Forest on Saturday.

Virginia: At top-ranked Duke on Saturday.