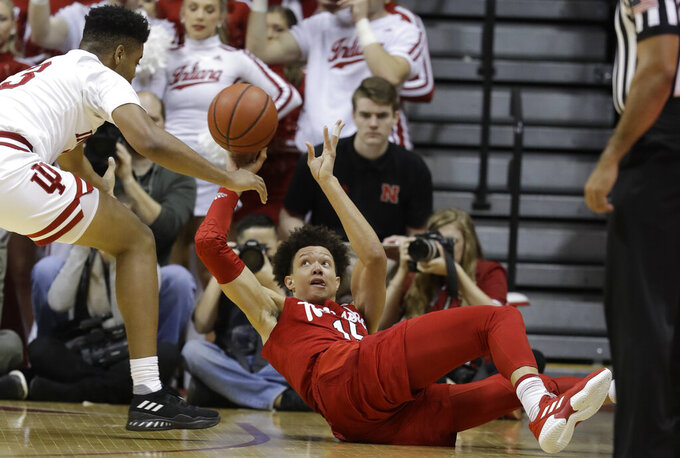 Nebraska's Isaiah Roby (15) makes a pass while be defended by Indiana's Juwan Morgan (13) during the first half of an NCAA basketball game, Monday, Jan. 14, 2019, in Bloomington, Ind. (AP Photo/Darron Cummings) 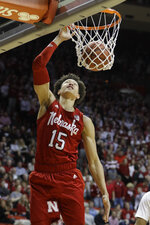 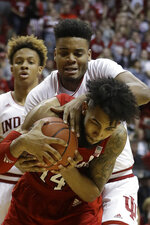 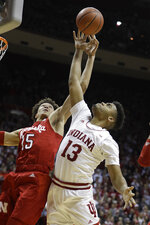 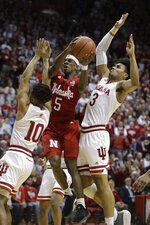 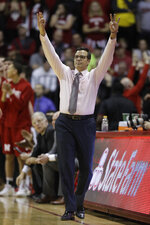 As Glynn Watson Jr. scored 15 points, Isaac Copeland added 14 and James Palmer flirted with a triple double, it was a smothering defense that helped Nebraska pull away for a 66-51 upset — its second straight victory on the Hoosiers' home court.

"At halftime, I said 'It's OK to win with defense,'" Cornhuskers coach Tim Miles said, trying to steady his team. "This is sure a confidence builder."

The Huskers (13-4, 3-3 Big Ten) won their second straight overall, extended their winning streak in the series to a school-record three and racked up style points by limiting the nation's second-best shooting team to its lowest point total and worst shooting percentage (36.5) of the season.

All it took was a fast start and Mills' trademark 1-3-1 defense to rattle the lethargic Hoosiers (12-5, 3-3), who never recovered from a dismal start. Indiana has lost three straight overall and had its home-court winning streak snapped at 10.

"That was probably one of the most disappointing games that we've played as a team this season. We didn't have any energy, any pop, either end of the floor," Indiana coach Archie Miller said. "I didn't think that we played with near enough energy to compete in this league. Offensively we were just horrendous in the first half."

It wasn't a matter of what went wrong but what didn't?

While Romeo Langford scored 18 points and Juwan Howard had 17 points and eight rebounds, nobody else scored more than five. And aside from Langford and Morgan, who were a combined 13 of 29 from the field, Indiana managed just six baskets.

Palmer, meanwhile, had 11 points, nine rebounds and seven assists — matching Indiana's team assist total in a game the Hoosiers seemed to zone out.

"I thought we did a good job getting to Romeo and Juwan, making them play in a crowd," Miles said. "We kept them out of transition for the most part. Getting off to an early lead was probably most important. Getting the crowd out of the game. The way you win big road games, you play from the front, and just hang on."

Nebraska followed that blueprint perfectly, scoring the first nine points and extending the lead to 25-7 midway through the first half.

When the Cornhuskers missed 12 consecutive shots, Indiana closed the deficit to 26-20 late in the first half and got as close as 35-32 early in the second half.

But Nebraska answered with an 8-0 run and closed it out by methodically pulling away late.

Nebraska: The Cornhuskers' defense can challenge anyone in the Big Ten with its length and versatility. And when they score consistently, they can pose a real threat against any team anywhere.

Indiana: Sure, the bounces didn't go Indiana's way. But Miller acknowledged his team was lethargic and out of sync from the start. He knows they need to get better quickly.

Nebraska: Never trailed in the game. ... The 15-point victory margin was Nebraska's largest in the series since a 38-18 victory in February 1920. . ... Palmer and Copeland made their 50th consecutive starts. ... The Cornhuskers also ended the Hoosiers 26-game home winning streak in December 2016, their last trip to Assembly Hall.

Nebraska: "I thought our guys did a very good job with the game plan from the get go," Miles said.

Indiana: "We just weren't getting the ball moved," Langford said. "We were just playing a little bit too conservative on the 1-3-1, weren't really attacking, and that's what you're supposed to do against the 1-3-1 is attack and get the ball in the middle."

Indiana: Hits the road for the third time in four games when it visits rival Purdue on Saturday.