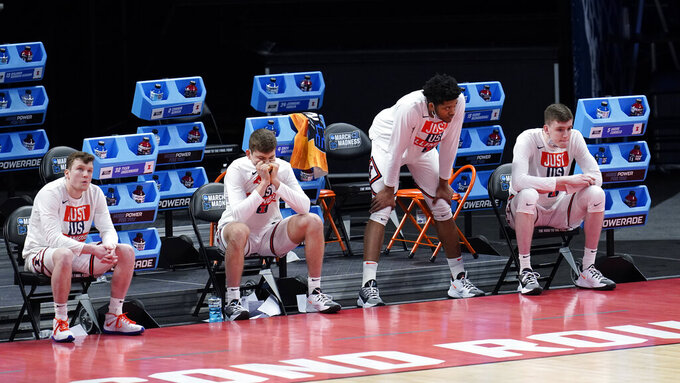 Illinois players watch from the bench in the final moments during the second half of a men's college basketball game against the Loyola Chicago in the second round of the NCAA tournament at Bankers Life Fieldhouse in Indianapolis, Sunday, March 21, 2021. Loyola Chicago won 71-58. (AP Photo/Paul Sancya)

Finally back in the NCAA Tournament, Illinois wanted to make a run at the school's first national championship.

Instead, the Fighting Illini weren't even the last team standing from their own state.

Illinois became the first No. 1 seed to exit the NCAA Tournament on Sunday, losing 71-58 to Loyola Chicago in the second round. The Big Ten heavyweight never led against the champions of the Missouri Valley Conference.

“The first 10 minutes of that game, they got us on our heels, and we never really recovered,” Illinois coach Brad Underwood said. “We had stretches, but they just rocked us.”

Illinois (24-7) entered its first NCAA Tournament since 2013 as the top seed in the Midwest Region and the No. 2 team in The Associated Press Top 25 behind Gonzaga. The Illini won the Big Ten Tournament title and trounced Drexel 78-49 in the first round for their eighth straight victory.

They boasted one of the nation’s top players in All-America guard Ayo Dosunmu and one of the game’s most physical post players in 7-foot, 285-pound sophomore Kofi Cockburn.

But they sure didn’t resemble a national title contender Sunday.

Illinois trailed by as many as 14 in the first half and never got the margin below six throughout the second half.

Loyola used most of the shot clock in every possession and shot 51% to reduce the transition opportunities for Illinois. Loyola leads all Division I teams in scoring defense and held Illinois to its lowest point total of the season.

“We tried everything in the bag,” Underwood said. “Everything that’s made us one of the most efficient offensive teams, today just for whatever reason didn’t work.”

Loyola (26-4) always figured to be more dangerous than its No. 8 seed suggested. The Ramblers are ranked in the top 10 in college basketball stat guru Ken Pomeroy’s overall national team rankings and reached the Final Four in 2018.

But Loyola also lost by 14 points to Wisconsin, which fell twice to Illinois in the regular season. Loyola still won this game decisively because Illinois didn’t get enough from some key players.

Trent Frazier, who was averaging 10.4 points this season, had just two points and shot 1 of 10. Dosunmu scored nine points and had six of Illinois’ 17 turnovers.

Cockburn had 21 points and nine rebounds, but he wasn’t the best big man on the floor. Loyola’s Cameron Krutwig, part of the Ramblers’ Final Four team, had 19 points, 12 rebounds and five assists.

“He dominated the game,” Underwood said.

It was a bittersweet finish to a memorable season for Illinois, which has returned to national relevance since Underwood’s arrival.

Illinois has reached the Final Four five times and has 41 NCAA Tournament victories. The only schools to win more NCAA Tournament games without a title to show for it are Oklahoma and Purdue with 42 each.

Yet the program was stuck in mediocrity when Underwood took over in 2017. After posting losing records in Underwood’s first two seasons, Illinois went 21-10 last year and would have earned an NCAA bid if the pandemic hadn’t halted the season.

Illinois made even bigger strides this year to continue what Underwood called “a resurrection of sorts.” Sunday’s game showed Illinois still has a few more steps left.

Dosunmu tried not to dwell on the disappointment of Sunday’s game. He instead wanted to think about all that Illinois had accomplished over the last couple of years just to get to this point.