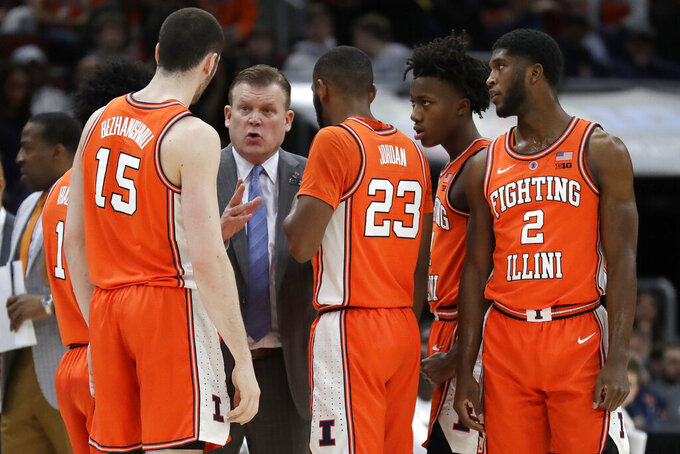 File-This March 14, 2019, file photo shows Illinois head coach Brad Underwood talking to his players during the first half of an NCAA college basketball game against the Iowa in the second round of the Big Ten Conference tournament, in Chicago. A young, maturing Illinois team is hoping for a breakthrough this season, the kind coach Underwood saw coming when he arrived in Champaign two years ago. (AP Photo/Nam Y. Huh, File)

CHAMPAIGN, Ill. (AP) — A young, maturing Illinois team is hoping for a breakthrough this season — the kind coach Brad Underwood saw coming when he arrived in Champaign two years ago.

The Illini received 14 votes in the Top 25 poll released this week, not enough to make the top rankings but a show of respect nonetheless. Illinois hasn't been ranked in the Top 25 since the 2014-15 season and hasn't made the NCAA Tournament since 2013.

"I'm just going to say it. I love the fact we have expectations this year," Underwood said. "I think Illinois basketball and our players are deserving of those. It's time we grew into those expectations."

Underwood, beginning his third season at Illinois with an overall record of 25-36 (11-25 in the Big Ten) clearly expects better things from his team this year. Illinois finished 12-21 last season, winning only seven of 13 conference games.

"Even though we are an extremely young team still, now we have experience and we have productivity back," Underwood said. "That's encouraging. We're past the unsure stage of what this thing is all about. We are no longer coaching effort."

LEADER OF THE PACK

The team is built around highly touted 6-foot-5 sophomore guard/forward Ayo Dosunmu, who averaged 13.8 points per game last season. Dosunmu flirted with the NBA draft last season but returned to Illinois to lead a team known for its swarming defense and ability to score points in a hurry.

"We feel we're ahead of where we were this time last year," Underwood said. "It's refreshing to have a nucleus of guys back, so now it's about building and adding."

Junior guard Trent Frazier is back, a veteran of Underwood's system and a three-point shooter who can spark a run at any given moment. Frazier's defensive style makes him invaluable on both ends of the court.

Joining Frazier in the backcourt is 6-2 senior Andres Feliz, who played in all 33 games last year and averaged 8.3 points. Feliz averaged more than 12 points a game during the final four games of the season and has shown signs of maturity.

"You're talking about one of the great low-post scorers in college basketball," Underwood said of Bezhanishvili, who hails from the nation of Georgia.

Rounding out the expected starters is 6-6 senior Kipper Nichols, who averaged 5.7 points and 2.8 rebounds last year.

Perhaps the most buzz around campus this fall has been around the arrival of Belgium-born freshman Benjamin Bosmans-Verdonk. The muscular 6-foot-8, 235-pound forward, who can also backup Bezhanishvili, is an intriguing addition.

He averaged 16 points and six rebounds per game at KA Pegasus in Belgium last year. He suffered a lower body injury during preseason workouts.

"We expect Ben to be healthy and we are excited to see what he can add to our program," Underwood said.

Illinois plays a high-pressure type of defense that gelled in the second half of the season. Led by Frazier, the Illini led the Big Ten in forced turnovers and Underwood expects that trend to continue. One trend needs to be addressed, however: Illinois allowed opponents to shoot 54.3%, which simply won't work once Big Ten play begins.

Illinois kicks off the season at home Nov. 5 against Nicholls State before hitting the road to play Grand Canyon and Arizona. The Illini welcome Miami on Dec. 2 and then open Big Ten play Dec. 7 at No. 7 Maryland before a home game against Michigan on Dec. 11.