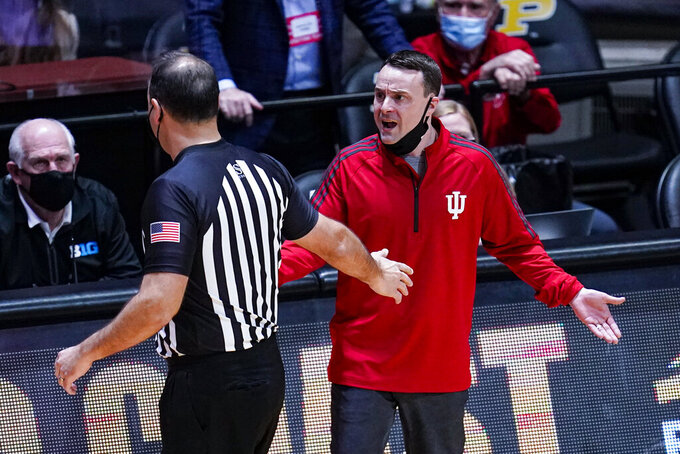 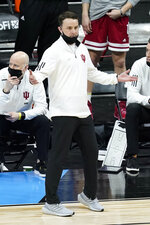 Archie Miller’s $10.3 million buyout was one of college basketball’s priciest.

Dolson fired Miller on Monday, armed with enough cash from private donations to cover the buyout and ready to answer a fan base angered by four straight mediocre seasons.

“It’s a results-oriented business and I didn’t feel like we had made enough progress," Dolson said on a late afternoon Zoom call. “I thought we needed a new voice and a new direction."

The Hoosiers were already headed in the wrong direction before Miller arrived in March 2017 and four years later, the groans only grew louder.

Indiana hasn't been to the NCAA Tournament since 2016, hasn't reached a Final Four since 2002 and hasn't won a national championship since 1987 — the longest drought in school history. It has won just three Big Ten titles since 1993 and now has five consecutive non-winning seasons in Big Ten play for the first time since 1911-19.

Miller was 67-58 with the Hoosiers. He never made the NCAA Tournament during his time at the school though many believed Indiana would have received a bid last year had the tourney not been canceled because of the COVID-19 pandemic.

There were other problems, too.

Miller never beat rival Purdue, going 0-7. The Boilermakers have now matched their second-longest winning streak in series history at nine. Those numbers put Miller in historically bad territory and were of great concern to Dolson, fans and alumni.

Dolson said he made his recommendation to school president Michael McRobbie over the weekend. McRobbie accepted the recommendation and then gave Dolson permission to find private money to cover the costs. Two meetings later, he also had the money to make it a more palatable decision amid a COVID-19 pandemic that has led to millions in lost revenue, reduced paychecks for coaches and administrators, and department-wide furloughs.

By making the decision before April 2022, Indiana was on the hook for the $10.3 million. If Dolson had waited another year, the cost would have dropped to $3.5 million.

“Prior to my conclusion, I had zero conversations with any donors as far as where we are as a program,” he said. “I didn’t take their temperature at all. I felt I had to do all of my due diligence first. Of course you hear things out there, but that had absolutely zero to do with my decision."

But their arrivals didn’t correlate into consistent success.

Indiana went 19-16 and reached the NIT quarterfinals in 2018-19, Langford's only season before he declared for the NBA draft. Jackson-Davis arrived the next season and led the Hoosiers to a 20-12 mark that had them on the cusp of an NCAA tourney breakthrough.

Leal played sparingly this past season as a freshman though Jackson-Davis appeared to have the Hoosiers in prime position for a tourney run as recently as mid-February. But the Hoosiers lost their final six games, capped by a Big Ten Tournament second-round loss to Rutgers. Indiana finished 12-15 and out of postseason play for the third time under Miller.

What Dolson wants next is someone with a vision to restore the luster to what has traditionally been one of basketball's blue-blood programs. And with a renovated Assembly Hall, a relatively new practice court facility and a state rich in basketball talent, Dolson thinks the Hoosiers job is one of the nation's most attractive.

“It's important that we build on the incredible foundation we’ve established here and I want to make sure we have a new coach that wants to partner with me and the department not to live in the past but to build on it," Dolson said. “What’s important to us is a style of play that recruits want to play in and is cutting edge as to where basketball is going in terms of how it fits with the NBA and moving on professionally. I think we need to have an attractive style that wins consistently and that players can see themselves playing in."

Dolson said he did not intend to hire a search firm or form a search committee. He declined to say whether any head coaching experience was a must.

Before coming to Indiana, Miller was 139-63 in six seasons at Dayton, leading the Flyers to an NIT appearance in his first season as coach and NCAA Tournament appearances in each of his final four seasons. Dayton reached the Elite Eight in 2013-14.

Miller's brother, Sean, is the head coach at Arizona.