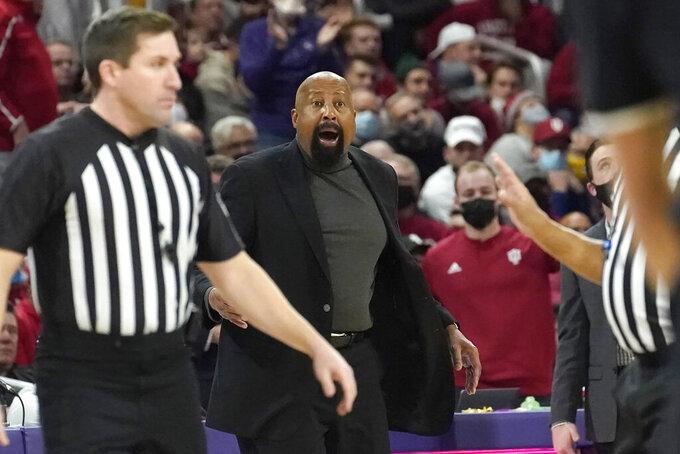 Indiana head coach Mike Woodson gets upset at the official after a technical foul was called on an assistant coach during the second half of an NCAA college basketball game against Northwestern Tuesday, Feb. 8, 2022, in Evanston, Ill. Northwestern won 59-51. (AP Photo/Charles Rex Arbogast)

BLOOMINGTON, Ind. (AP) — The Indiana Hoosiers should be at full strength when they visit No. 17 Michigan State on Saturday.

Coach Mike Woodson announced Thursday that the five players who were suspended for Tuesday night's loss at Northwestern will be reinstated this weekend.

Starting guards Xavier Johnson and Parker Stewart were joined on the bench by backup guards Tamir Bates and Khristian Lander and center Michael Durr. All five are in Woodson's regular rotation but sat out after an apparent curfew violation. Indiana lost to the Wildcats, 59-51.

“It’s important that all team rules are followed and a curfew applies to everyone in our program for a reason,” Woodson said. “It will be my decision to determine what role each one will have moving forward.”