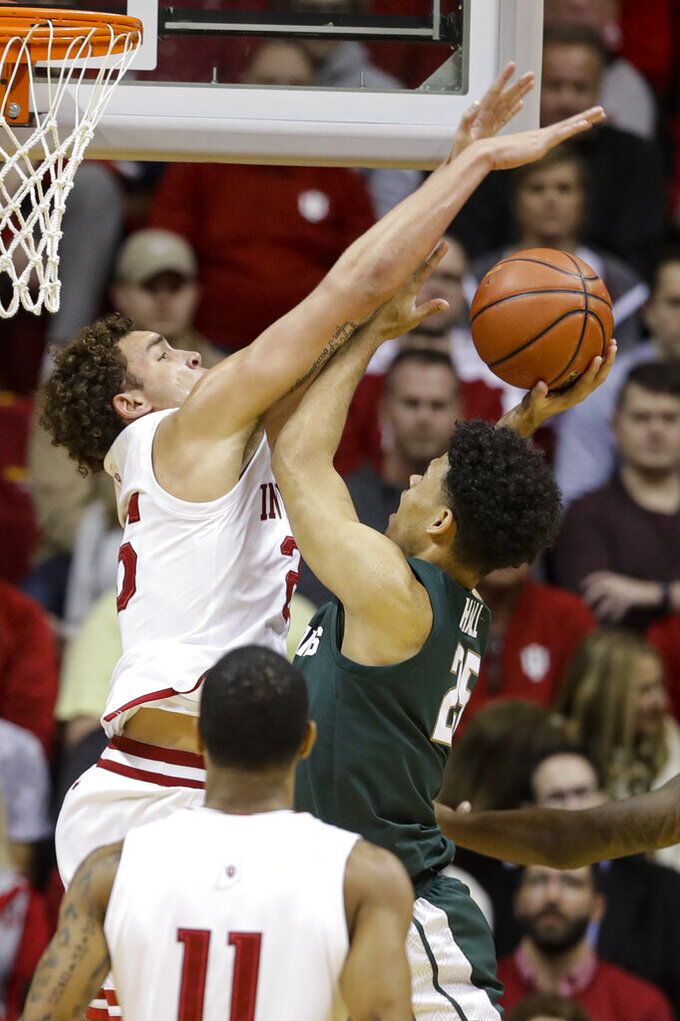 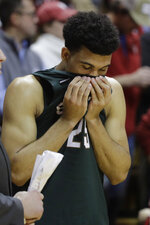 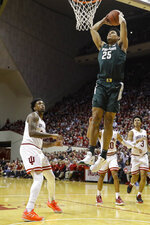 BLOOMINGTON, Ind. (AP) — Joey Brunk made an immediate impact from the moment he arrived on Indiana's campus.

On Thursday night, the graduate transfer from Butler and the redshirt freshman teamed up for the Hoosiers' final flurry. Brunk scored 14 points including a layup with 1 minute to go, Hunter grabbed a rebound with 0.2 seconds left and made two free throws to seal Indiana's 67-63 victory over No. 11 Michigan State.

“He had 14 and six (rebounds) tonight and he earned them all," coach Archie Miller said when asked about Brunk. “It's not measurable what Joey has meant to us. He's giving his absolute max on everything he does. He's improved as much as any player I've been around from month to month."

Without Brunk — or Hunter — the Hoosiers may not have salvaged this one.

The Hoosiers (15-4, 5-3 Big Ten) have won two straight, four of their last five and now trail conference co-leaders Michigan State and Illinois by just one game.

Cassius Winston, the league's preseason player of the year, could have forced overtime when he drove through the lane in the waning seconds. But when Hoosiers forward Trayce Jackson-Davis slid toward Winston, he flipped the ball to Xavier Tillman for a layup that rolled off the rim and into the hands of Hunter.

“We just didn't play good enough to win on the road," coach Tom Izzo said. “I think he tried to get it up on the rim and I thought he had a wide open layup. He just missed it."

The Hoosiers started fast and still led 37-30 at the half.

But Michigan State made its first six 3s of the second half and finally took the lead, 51-48, on Rocket Watts' 3 with 11:06 remaining.

It stayed a one-possession game the rest of the way, but the momentum finally swung when Aljami Durham 's 3 with 1:52 to go broke a 60-60 tie. Brunk's layup made it 65-62 and Hunter sealed Indiana's biggest win of the season with his only points of the game.

“Jerome sort of took the anxiety out of the building with making two free throws — the most important two of the game," said Miller, who picked up his 50th win at at Indiana.

Michigan State: Trips to Indiana just haven't been kind to the Spartans lately. On Jan. 12, they were routed at Purdue. This time, they got beat in the closing minutes. Clearly, Michigan State performed closer to expectations than it did at Purdue. But another slow start cost them another game. They will return to Indiana for the conference tournament in March.

Indiana: It doesn't seem that long ago that the Hoosiers struggled to make shots. But they've figured out how to limit the 3s and take advantage of their size and athleticism inside, and it has made a huge difference. If Indiana's offense stays in sync this weekend, it just might crack the Top 25 for the first time.

Michigan State: Aaron Henry had 12 points, while Gabe Brown had 10 points and four 3s. Xavier Tillman finished with nine points and 10 rebounds. ... The Spartans had 13 turnovers, but only gave up six points off those turnovers. ... Michigan State started the game by missing its first nine 3s. It wound up 9 of 21 from beyond the arc.

Indiana: Jackson-Davis had 12 points and four rebounds, while Durham finished with 11 points and four 3s. ... Race Thompson had four points, two blocks and two steals before leaving the game late in the first half after a hard foul sent him crashing to the floor. He sat on the bench the entire second half with what Miller called a stiff back. ... The Hoosiers were just 11 of 20 on free throws. ... NBA star Victor Oladipo attended the game. The two-time All-Star is expected to make his season debut with the Indiana Pacers on Wednesday.

Izzo acknowledged it was an emotional night. And after sticking with Winston through his slow start, Izzo asked his most talented player to do even more.

“I think maybe Cassius is going to have to get mad. Maybe mad at the world, maybe mad at me," Izzo said. “Its been a little bit of a struggle and I'm just trying to hang with him because it's a tough thing he's gone through.”

Michigan State: plays two of its next three on the road, including Sunday's stop at Minnesota.

Indiana: hosts another ranked opponent, No. 17 Maryland, on Sunday.