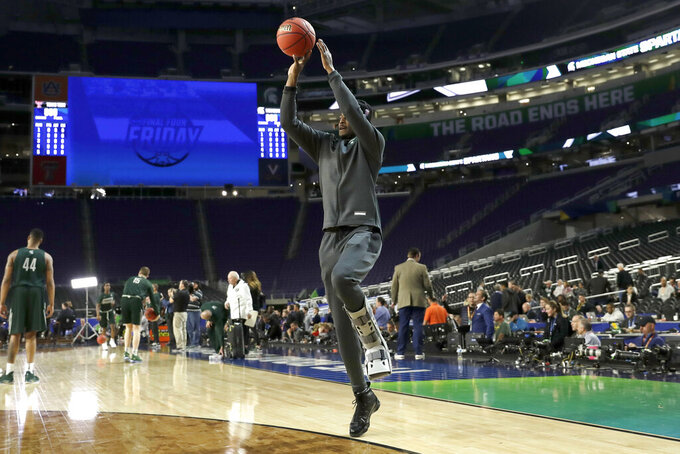 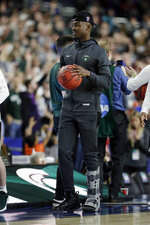 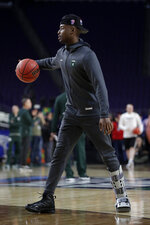 MINNEAPOLIS (AP) — Under different circumstances Joshua Langford might have had a throng of reporters around him as he sat in front of his locker at U.S. Bank Stadium, two days before Michigan State plays in the Final Four.

Langford is the Spartans' co-captain and second-leading scorer, but has not played since late December because of an ankle injury. So instead of drawing lots of attention from media Thursday, the way All-America teammate Cassius Winston and emerging Spartans freshman Aaron Henry did, Langford only did a few interviews.

Langford has watched more than participated this season, but he has been way more than just a spectator.

"It's been a great experience for me just because, well first of all, I always said I wanted to come to a Final Four, so I'm here at the Final Four," said Langford, who was wearing a plastic walking boot to support his surgically repaired left foot. "So I've learned a lot. You know just because I'm not able to play I still have figured out a way to try to still be a part of the team and that's through my voice."

Langford is one of two talented players who will make an impact on Saturday's Final Four even though they are not healthy enough to play. Langford has found a niche as leader, mentor and part-time assistant coach for the Spartans, who face Texas Tech. Auburn will face Virginia without star forward Chuma Okeke, who injured his knee in a Sweet 16 victory against North Carolina but has helped inspire the Tigers to the first Final Four in school history.

"Let's get this done, baayyy-beeee! For Chuma," teammates Austin Wiley, Myles Parker and Malik Dunbar sang into a video camera Thursday in the Auburn locker room.

Langford's injury came in Michigan State's final nonconference game on Dec. 29 against Northern Illinois. Not until a month later was it determined the 6-foot-6 junior from Huntsville, Alabama, was done for the season.

Izzo, who is in the Final Four for the eighth time with the Spartans, said he instructed Langford to keep an eye on out-of-bounds plays and make sure his teammates are in proper position.

"That kid has not missed one second of one practice the entire time he's injured. He's a special person, both as a student, spiritually and athletically," Izzo said. "We miss him, but we have kept him involved."

Langford was on the court Friday with his teammates — boot be-damned — shooting one-legged jumpers during Michigan State's open practice.

Langford's presence has been especially important to one of the players that have helped replace him. Henry called Langford the team's big brother.

"He's been hurt, but he's not really out," he said. "He was a freshman at one point and he realizes how hard it was when he first got here. Just anything he may say to us: encouraging words, helping us on defensive assignments, picking us up for class, taking us to film. Anything that he does, man, is huge for us."

Langford concedes not being able to play has produced some frustrating times.

"I've had so much more good days than bad days because I understand who I am," Langford said. "So at the end of the day I have to really just embrace this because this is not doing anything but making me a better person and a basketball player."

For Auburn, Okeke had developed into the team's most well-rounded player. The 6-foot-8 sophomore leads the team in rebounding and steals, while also being a threat from 3-point range. He was the best player on the court against North Carolina last Friday, before going down with an injury. Okeke had surgery to repair a torn ligament in his left knee Tuesday. He is not expected to make the trip to Minneapolis to be with the team when the fifth-seeded Tigers try to pull off a third straight NCAA Tournament upset against top-seeded Virginia.

#DoItForChuma has become Auburn's rally crying, both online and in the locker room. Wiley said he can pretty much get his teammates to do anything if it's for Okeke, which explains the off-key singalong.

Before the Tigers played Kentucky in the South Regional final Sunday, Dunbar saw Okeke's jersey hanging in the locker and decided he would wear it during warmups.

At Michigan State, Langford has been joined on the bench by Kyle Ahrens, a junior forward who injured his ankle in the Big Ten Tournament championship against Michigan and has not played since.

"It's like we talk about it all the time, you know, we're going to be back here. This is our goal next year," Aherns said.

That may be the case, but Langford, strengthened by his faith in God, is still relishing the present, too.

"Only a few people can say that they was on a team that made it to a Final Four," Langford said. "So to be able to get to this point in my life ... is definitely nothing but a blessing."