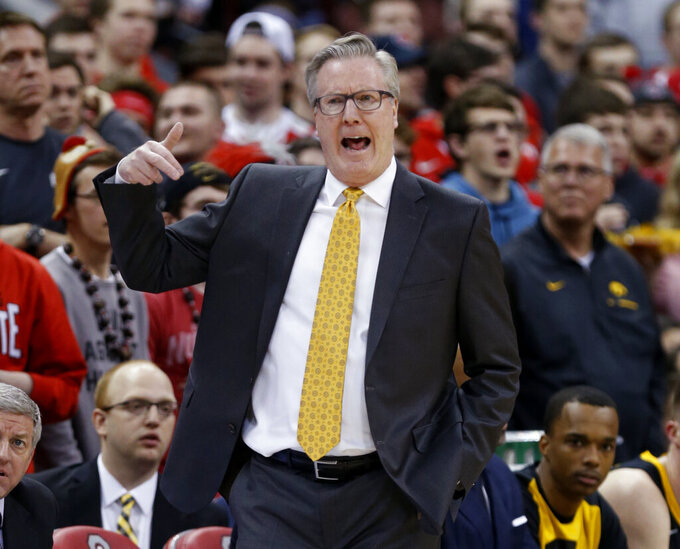 IOWA CITY, Iowa (AP) — Iowa play-by-play announcer Gary Dolphin, who was suspended last week for likening Maryland's Bruno Fernando to "King Kong" during a game, will be reinstated after the end of the season. Coach Fran McCaffery will join Dolphin on the sidelines for two games after being suspended for berating an official.

Hawkeye Sports Properties, the multimedia rights manager for the program, said Dolphin will return to cover Iowa's spring football practice. Dolphin, who has been with Iowa since 1996, will be the Hawkeyes' football and men's basketball announcer again next season.

Late in a 66-65 home loss to Maryland last week, Dolphin said that Fernando, a 6-foot-10, 240-pound African-American who was born in Angola, "was King Kong at the end of the game."

Dolphin said Wednesday that he had hoped to return for the postseason in part so he could clear the air, but understands why he was suspended.

Dolphin also said that he will try to reach out to Fernando after the season.

"It was unintentional. But it was wrong," Dolphin said. "Obviously I stepped over the line. I'll own it. ... I don't plan to change my style. But I will tweak it. There's no question about that."

It was the second suspension for Dolphin this season. He sat out two games after being caught on an open microphone criticizing Iowa guard Maishe Dailey in a win over Pittsburgh in late November. Athletic director Gary Barta said that that incident factored into the decision to make Dolphin's suspension run through the season.

"His comment, even though regardless of intent, was inappropriate and insensitive," Barta said. "Moving forward, we can use this as an educational opportunity."

McCaffery, meanwhile, was disciplined for yelling at an official in a hallway heading to the locker room following a 90-70 loss at Ohio State on Tuesday night. He and his son, point guard Connor McCaffery, received technical fouls in the second half against the Buckeyes.

McCaffery will miss games against Rutgers and Wisconsin. The Big Ten Conference tacked on a $10,000 fine for the university along with a public reprimand of McCaffery, who is is in his ninth season at Iowa. The 22nd-ranked Hawkeyes (21-7, 10-7 Big Ten) have three regular-season games left.

Barta said that he supports his coach "100 percent" and McCaffery, who was suspended a game for arguing with officials in 2014, apologized.

"I'm a very passionate person," said McCaffery, who added that he'll be allowed to celebrate Nicholas Baer during senior day ceremonies on Saturday, when Rutgers visits Iowa. "One thing I can assure you is that my players know and understand how passionate I am about them."

The buzz that has surrounded Dolphin and McCaffery's suspensions threatened to overshadow what has been a terrific season for both the men's and women's basketball teams.

The Iowa men will almost certainly return to the NCAA Tournament after a two-year absence, and the women's program is expected to host the first two rounds as one of the top 16 teams in the field.

"Sometimes throughout the course of a season things happen. You deal with them," McCaffery said.