Iowa hangs on for 77-70 victory over Cincinnati 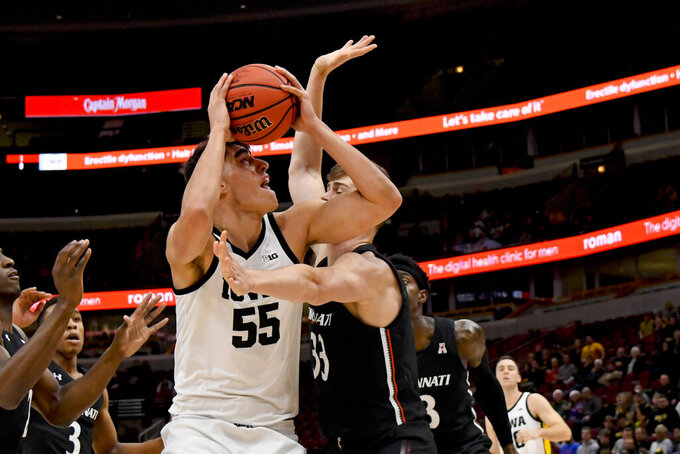 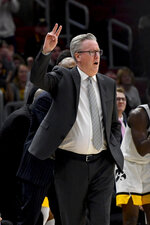 CHICAGO (AP) — Despite losing a 15-point second-half lead, the Iowa players say they never had any doubts.

CJ Fredrick had 21 points, Joe Wieskamp had 16 and Luka Garza had 12 points and 13 rebounds as the Hawkeyes pulled away late for a 77-70 victory over Cincinnati on Saturday night.

Bakari Evelyn had 15 points off the bench as Iowa (9-3) won its third straight and eighth in 10 games. The Hawkeyes closed with a 15-6 run over the final 4 1/2 minutes to win in spite of committing 24 turnovers.

“We were never in doubt with each other," Fredrick said. "We stayed connected as a group, and I think after that we only had about two turnovers and finished the game.”

Jarron Cumberland had 18 points for Cincinnati (7-5), which has dropped three of four.

The teams met in the first round of the NCAA tournament last March, with Iowa winning 79-72 in Columbus, Ohio.

Iowa was playing its first game since senior guard Jordan Bohannon had season-ending surgery on his left hip on Thursday. Bohannon, who had the same procedure on his right hip in May, averaged 8.8 points and 3.3 assists in 10 games. He is a career 40.3% 3-point shooter in 112 games with the Hawkeyes.

Iowa scored eight straight points late in the first half for a 35-27 advantage with under two minutes to play. Fredrick, who had 10 first-half points, started the run with a short jumper and then Wieskamp and Garza hit back-to-back 3-pointers.

Iowa had another run of eight straight early in the second half — five by Garza — to open up a 50-35 lead, its biggest of the game.

But then the Hawkeyes went scoreless for six minutes, 10 seconds as Cincinnati scored 10 straight — capped by a 3-pointer by Mika Adams-Woods — to pull within 50-45 with 11 minutes remaining.

Iowa, which missed the front end of two 1-and-1 opportunities during the drought, ended the scoreless streak when Connor McCaffery made two of three free throws after being fouled on a 3-pointer with 10:41 to play.

The Bearcats continued their surge with defensive pressure, forcing Iowa into turnovers on four straight possessions at one point. Keith Williams tied the score at 62 with a pair of free throws with 5:35 to go and then gave Cincinnati the lead on the next possession with a follow basket off his own miss.

After taking the lead, Cincinnati suddenly went ice cold from the field, going scoreless on seven of the next eight possessions as Iowa held on.

“One of the things that always hurts us is being undisciplined," Cincinnati coach John Brannen said. "You’ve got to marry playing hard and being disciplined. We weren’t disciplined at the end of the game to be able to finish.”

Iowa was proud of its poise late.

“They're a really aggressive defensive team,” Garza said. "They try to get up into you and force those turnovers. I think we let that get to us a little bit during that stretch in the second half (after) we got a lead. It's a good lesson for us going forward just to make sure that can't happen again.

“You've gotta win the ugly ones, too."

Cincinnati: Despite a 78-66 home win over No. 21 Tennessee on Wednesday, the Bearcats have hit a rough patch and now have a 10-day break to regroup before beginning conference play.

Iowa: The Hawkeyes will need to take care of the ball better once the Big Ten season begins next month.

With Bohannon out, freshman Joe Toussaint moved into the lineup and had a tough debut as a starter, going scoreless with three turnovers in 3 1/2 minutes.

“He fell the first three times he got the ball,” coach Fran McCaffery said. “I really wanted to get him back in, but he'll settle down. He's a really good player. This is all part of the growth process. He's young, but he's a competitor. He'll have an opportunity in the next one.”

Cincinnati hosts UConn on Jan. 1 in the American Athletic opener.