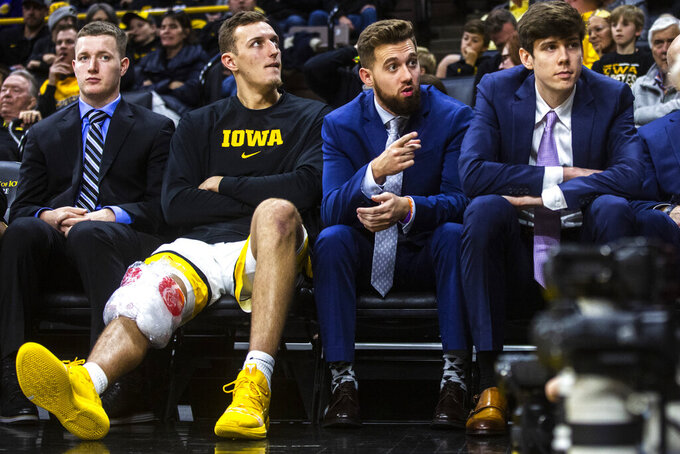 The Hawkeyes are about to find out if they’re equipped to deal with a month-long stretch featuring nothing but heavyweights.

Redshirt freshman CJ Fredrick had a breakout game with a career-high 21 points, hitting all five of his 3s, and Iowa overwhelmed Cal Poly 85-59 on Sunday for its third straight win.

“He’s a complete player, and as impressed as I am with him, I’m not surprised,” Iowa coach Fran McCaffery said of Fredrick.

Luka Garza had 18 points with nine boards for the Hawkeyes (4-1) in their final tuneup ahead of a stretch featuring significantly tougher opponents.

Iowa plays No. 12 Texas Tech on Thursday, either Creighton or San Diego State the following day, Syracuse, Michigan, Minnesota, Iowa State and Cincinnati over its next seven games. The Hawkeyes got rolled by DePaul 93-78 at home on Nov. 11, its only matchup against a fellow high major so far.

“It should be a great barometer for us,” McCaffery said of Thursday and Friday’s games, which will be played in Las Vegas.

Garza opened the second half with short banks shots on back-to-back possessions that gave Iowa a 39-25 lead, its biggest to that point. Cal Poly, which entered play ranked fourth in 3-point percentage at 45.3, hung around with three quick 3s. But Fredrick’s fifth consecutive 3-pointer became a 4-point play that made it 55-42 Iowa.

Sunday was likely the last time Iowa will have such an easy go of it in the second half though.

Cal Poly: It was a tough trip to the Midwest for the Mustangs, who lost at Creighton in nearby Omaha, Nebraska, 86-70 on Friday night.

Iowa: Senior guard Jordan Bohannon sat out as a precaution due to hip soreness. Bohannon had offseason surgery on that hip, and it’s unclear if he’ll play the whole season or request a medical redshirt. Bohannon has played in four games so far, averaging seven points and two assists. Jack Nunge also didn’t play in the second half after suffering a knee injury late in the first half. McCaffery said Nunge will get an MRI. “Jordan was pretty sore. We’ll see how he does this week,” McCaffery said.

Joe Wieskamp, who scored all 10 of his points in the second half, isn’t having the breakout sophomore season many expected quite yet. But if Fredrick can emerge as an option on the wing, the Hawkeyes won’t have to be so reliant on Wieskamp. Fredrick, who redshirted last season after being named Kentucky’s player of the year as a prep senior, added five assists and a steal, and he was turnover-free. “It just felt like myself again. I felt like the past couple of games, I was not as aggressive as I usually am,” said Fredrick, who had just 11 points in his last two outings. “I cam out here (thinking) if I’m open, I’m going to shoot it.”