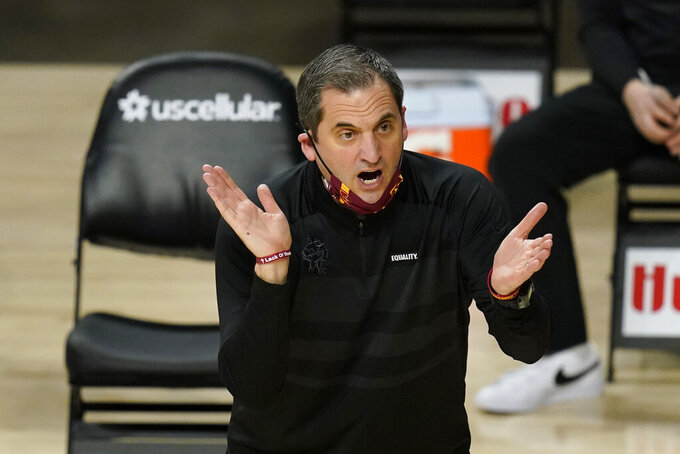 Iowa State head coach Steve Prohm reacts to a call during the first half of an NCAA college basketball game against Texas, Tuesday, March 2, 2021, in Ames, Iowa. (AP Photo/Charlie Neibergall)

Pollard on Tuesday released a 10-minute video in which he discusses the reasons for letting Prohm go and why the Cyclones need to move quickly to make a hire.

Pollard also knocked down speculation that a donor or group of donors volunteered to buy out Prohm's contract a day after Indiana acknowledged “private philanthropic funding” would be used to pay the fired Archie Miller's $10.3 million buyout.

Prohm's contract was through 2025, and it called for him to be paid $5 million if he were fired this year. The athletic department faces a $25 million budget shortfall this year because of the pandemic, and Pollard did not say in the video if there was a negotiated settlement. A school spokesman referred questions to Pollard, who was not immediately available.

“Something I've heard out there, that there (was) a donor or were donors who stepped up and said ‘we’ll pay the buyout,’ that did not happen,” Pollard said. “I don't want that to ever happen at Iowa State. I think that sends a horrible message about how the program is led and managed.”

Drake' Darian DeVries, an Iowa native who has had three straight 20-win seasons and led the Bulldogs to the NCAA Tournament, and whose school is 30 miles south of Ames, in Des Moines.

UNLV's T.J. Otzelberger, an assistant under former ISU coaches Greg McDermott and Fred Hoiberg who had a successful run at South Dakota State before taking the UNLV job in 2019.

Loyola-Chicago's Porter Moser, who took the Ramblers to the Final Four in 2018 and has them back in the NCAA Tournament this year.

Nebraska's Hoiberg, who grew up in Ames and was so popular as a player for Iowa State that he was known as “The Mayor.” He also went to the NCAA Tournament four out of five years as Cyclones coach from 2010-15. He just finished his second year at Nebraska, where he's 14-45.

“With the landscape we're in now in college athletics, with transfers being able to leave and be eligible right away at other schools, with recruits we've signed, we have a responsibility to those young men to be able to share with them sooner than later who their head coach is going to be,” Pollard said.

Pollard and Prohm met several times in recent weeks to assess the program and chart a course forward. The two agreed staff and player changes would be necessary, Pollard said, and that rebuilding the program could take several years.