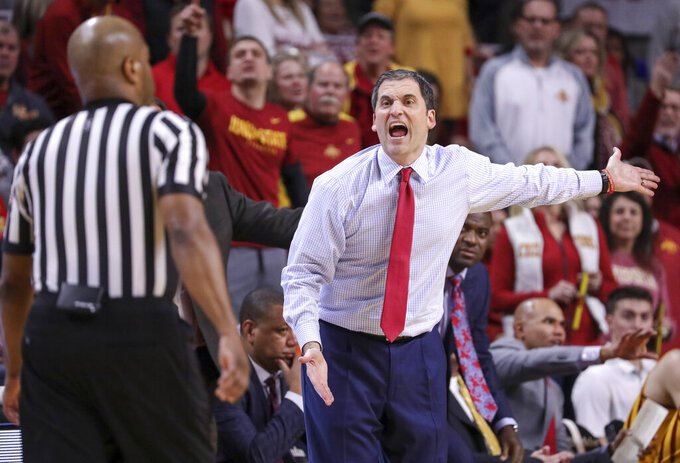 Iowa State head coach Steve Prohm disagrees with a call from one of the officials during the second half of an NCAA college basketball game against Kansas State, Saturday, Jan. 12, 2019, in Ames, Iowa. Kansas State won 58-57. (AP Photo/Justin Hayworth) 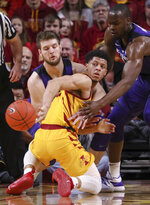 AMES, Iowa (AP) — Iowa State looked like one of the favorites to win the Big 12 a week ago.

These days, the Cyclones are struggling to stay afloat in a league that rarely lets anyone off the hook.

Iowa State (12-4, 2-2 Big 12) dropped a pair of games last week to two of the league's less-imposing teams; Baylor and Kansas State, and dropped out of the latest Top 25. The losses came by just four combined points, but they put Iowa State in a tough spot with road games at No. 8 Texas Tech, No. 7 Kansas and No. 18 Mississippi looming over the next two weeks.

The Cyclones also lost power forward/center Solomon Young for the season with a groin injury that has nagged him for months, more bad news ahead of Wednesday's game against the Red Raiders.

"A disappointing week," Iowa State coach Steve Prohm said. "This week will make us much tougher down the stretch."

Iowa State looked as though it was ready to challenge for the league title when star guard Lindell Wigginton returned from a foot injury. But the first-team All-Big 12 preseason pick has shot less than 50 percent in each of his last five games. The Cyclones beat Kansas 77-60 despite having Wigginton shoot just 2 of 11, but last week he made just 5 of 16 shots in those two losses.

Prohm said Monday that he's been working with Wigginton on improving his shot selection — especially when he gets into the lane.

As for Young, his absence will be exacerbated if sophomore Cam Lard, who has a sprained ankle, can't play against the Red Raiders. Prohm said he expects Lard to be in uniform, but his status is uncertain.

Lard struggled in his return from a seven-game suspension. But there were positive signs before he was hurt in the loss to Baylor.

"He's done all the right things. His practice habits have gotten better," Prohm said. "He provides a rim presence that we need."

Iowa State did get a boost from young center George Conditt in Saturday's loss, an encouraging sign for both the team's present and its future. Conditt, a 6-foot-10, 218-pound freshman who lost his spot in the rotation after Lard and Young returned, played 15 minutes and scored nine points on 4 of 4 shooting.

Though Conditt has yet to put on the weight he will need to play major minutes in the Big 12, his athleticism and shot blocking abilities are intriguing.

"I'm always telling him to be confident out there: 'Even though you don't have the strength, you have the length,'" Young said of Conditt, his roommate.

Rotation changes have been nothing new for the Cyclones, who have had 12 players average at least six minutes a game despite Prohm's preference for a short bench. Iowa State is hoping to get Wigginton back on track and Lard back on the court as soon as possible — and then make a run despite the difficulties lying ahead.

"We've had about six, seven, eight different versions of this team so far. Whenever we get the full-fledged version of this team, we'll be good," Prohm said. "The sky isn't falling."