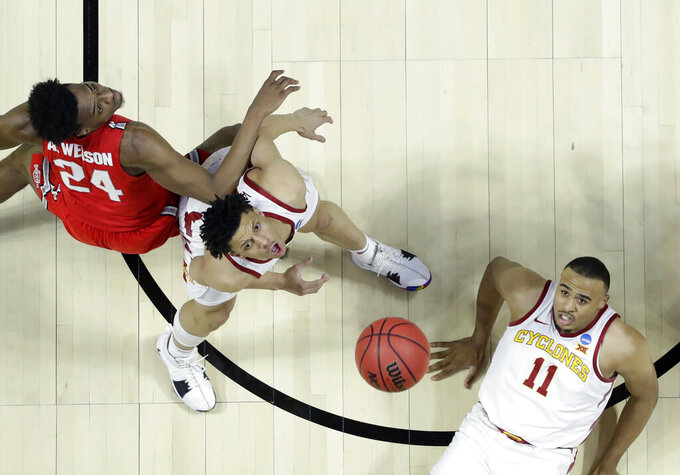 Iowa State's Talen Horton-Tucker (11) and Lindell Wigginton watch a rebound alongside Ohio State's Andre Wesson (24) during the first half of a first round men's college basketball game in the NCAA Tournament Friday, March 22, 2019, in Tulsa, Okla. (AP Photo/Jeff Roberson)

AMES, Iowa (AP) — Iowa State freshman guard Talen Horton-Tucker intends to declare himself eligible for the NBA Draft after just one season with the Cyclones.

Horton-Tucker announced his decision on Twitter on Monday, saying that it's in his best interests to "start the next chapter" of his life.

Horton-Tucker, a Chicago native, averaged 11.8 points and 4.9 rebounds a game for Iowa State in 2018-19. Although he faded a bit down the stretch, Horton-Tucker's 235-pound frame — combined with his ability to finish at the rim — could make him an intriguing pro prospect.

Iowa State will also lose Marial Shayok and Nick Weiler-Babb to graduation, and Cam Lard announced last week that he is leaving the program.