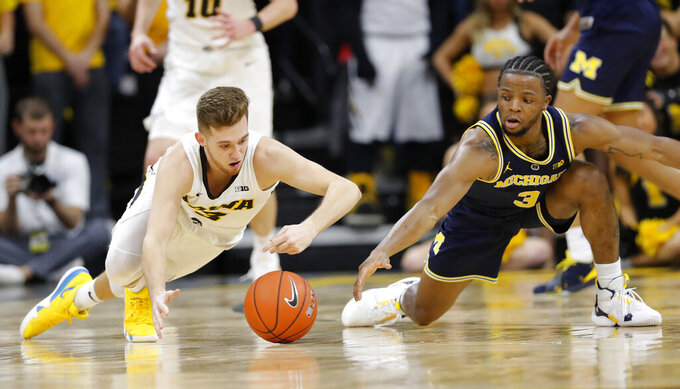 IOWA CITY, Iowa (AP) — Michigan's Colin Castleton squared up for a meaningless 3-pointer at the buzzer — only to see the ball get stuck between the backboard and the rim in front of jubilant Iowa students clamoring to storm the floor.

It was the brick that encapsulated a lost night for Big Blue.

Ryan Kriener had 15 points and 10 rebounds off the bench for the Hawkeyes (17-5, 6-5 Big Ten), who snapped a two-game losing streak with their biggest win in years.

"I think what it says about this team specifically is, when you put it together from a game plan perspective and execute, we can be pretty good," Iowa coach Fran McCaffery said.

The Hawkeyes were a lot more than pretty good in blowing past the Wolverines and their top-notch defense.

Iowa put Michigan in its biggest hole of the season, 14 points, late in the first half. The Hawkeyes used a 21-2 run to grab a 42-29 lead at the break — nearly matching the 49 points Ohio State put up against Michigan on Tuesday.

"I can see why they're 17-5 right now," Michigan coach John Beilein said about Iowa. "We got beat by a really good team. They (were) much better than us. Their bench was terrific."

Ignas Brazdeikis and Jordan Poole each scored 16 points for Michigan, which allowed 70 or more points for just the second time this season. Big Blue shot just 32.3 percent and 8 of 33 on 3s and got outscored 40-20 in the paint.

"We couldn't stop their big guys," Beilein said. "We had young guys guarding them because of foul trouble."

Michigan: The Wolverines fell a half-game behind Michigan State in the Big Ten race. The difference? Michigan State won in Iowa City, crushing the Hawks 82-67, and Michigan didn't. But the Wolverines and Spartans have two meetings coming up, including the regular-season finale in East Lansing on March 9. That might still be the game that decides the league title.

Iowa: This was the signature win the Hawks have been looking to add to their postseason resume. Iowa also beat Iowa State, now ranked 20th, but the Cyclones didn't have star guard Lindell Wigginton for that one.

Michigan will take a tumble, but it likely won't fall too far considering it only has two losses — both on the road in league play. The Wolverines lost at Wisconsin 64-54 on Jan. 19. As for Iowa, this might've been enough to get the Hawkeyes back into Monday's poll.

Iowa forward Tyler Cook didn't have his best game, finishing with seven points and eight rebounds, but it didn't matter. Garza and the rapidly-improving Kriener helped the Hawkeyes outrebound Michigan 48-36, even though he sat most of the first half with two fouls. "We really focused in on the defensive end and just played really hard and got after it," Garza said. "This how we've got to play every night."

Iowa, the best team in the Big Ten at getting to the line and making its free throws, was 16 of 24 from the line. Michigan was 9 of 12. ... Zavier Simpson had 10 points, eight rebounds and seven assists for Michigan. ... Jon Teske had eight points and eight boards for the Wolverines, but he was limited to 13 minutes because of foul trouble. Teske, who barely played a minute in the first half, eventually fouled out.

"I saw it coming last year as well," Beilein said about Iowa, which pushed Michigan to overtime in the Big Ten tournament last season. The Wolverines went to make a run to the NCAA title game. "I was laughing at people when they were going into this year and they ... weren't being ranked as one of the top teams in the league. I said 'Are you kidding me? They've got everybody back.' I mean, who has everybody back?"

Michigan: Faces Rutgers on the road on Tuesday.

Iowa: Plays at Indiana on Thursday.