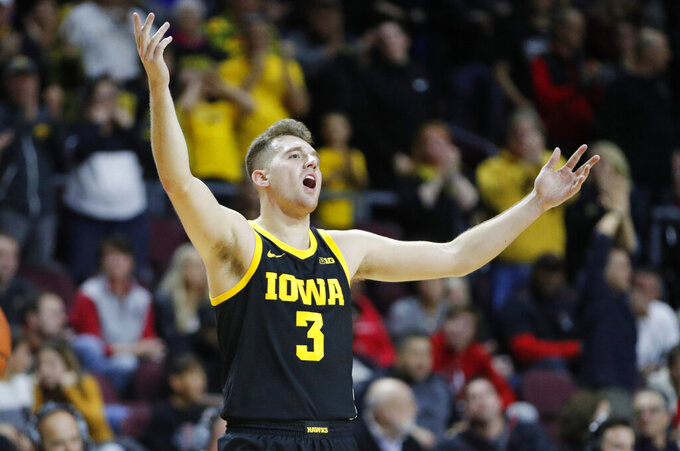 Iowa's Jordan Bohannon (3) celebrates as his team leads against Texas Tech during the second half of an NCAA college basketball game Thursday, Nov. 28, 2019, in Las Vegas. (AP Photo/John Locher) 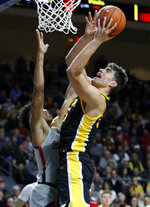 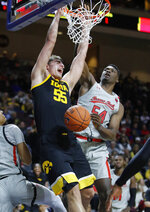 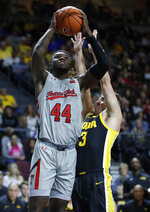 LAS VEGAS (AP) — Faced with its first true test of the season, No. 12 Texas Tech fell short and lost a top player to injury.

Jordan Bohannon had 20 points and six assists, Luka Garza added 17 points and 12 rebounds, and Iowa held off the Red Raiders 72-61 on Thursday at the Las Vegas Invitational.

The Hawkeyes (5-1) will play in the championship game Friday night against San Diego State.

“I’m very proud of our defensive effort,” Iowa coach Fran McCaffery said. “We recognized the quality of our opponent. Texas Tech is a talented team, and incredibly well-coached. Anything short of that, we would have been carved up.”

Chris Clarke had 11 points and 10 rebounds off the bench for Texas Tech (5-1), which lost Big 12 leading scorer Jahmi’us Ramsey to a leg injury with 10:06 to play. He finished with seven points.

After the game, coach Chris Beard was unsure of Ramsey’s status for Friday’s consolation game against Creighton.

Joe Wieskamp had 16 points and six rebounds for the Hawkeyes, and CJ Fredrick scored 10. His 3-pointer off a broken play as the shot clock expired put Iowa ahead 64-59 with 1:29 left. He followed that up with two free throws with 1:07 remaining to just about put it away.

“(Fredrick) has always had that clutch gene,” McCaffery said. “I knew when he let that (3-pointer) go, it was going in. Then he comes around and hits two free throws.”

TJ Holyfield and Kyler Edwards each scored 10 for the Red Raiders, who lost to Virginia in the national championship game last season.

“We put in a lot of work this week and it showed,” said Garza, who was 7 of 13 from the field with two blocks. “We’re not done. We have more of a chip on our shoulders after losing to DePaul. These are the games I love playing. That’s why I signed up for the Big Ten.”

Iowa opened a 36-21 lead in the first half, its largest of the game, before the Red Raiders scored the last five points of the period.

“I didn’t like our start tonight,” Beard said. “In the second half, we played Texas Tech basketball and we played smarter. I give Iowa credit. We respect their team.”

Iowa: Played its first game since starting forward Jack Nunge sustained a season-ending torn ACL in his right knee Sunday against Cal Poly. “I usually don’t match with what someone else does,” McCaffery said. “But we went with a small lineup (without Nunge). I thought that would be particularly good in this game.” ... Iowa is making its first Las Vegas Invitational appearance since 2008.

Texas Tech: Ramsey entered averaging 19.4 points per game. ... Texas Tech came in leading the nation with 22 assists per game. Against the Hawkeyes, the Red Raiders had only 12. ... Beard dropped to 4-1 against Big Ten teams.

Kevin McCullar fouled out for Texas Tech with 4:23 left, and Holyfield played with four fouls for the last 8:01.

“Down the stretch, we committed too many fouls. We did not play smart,” Beard said.

Iowa improved to 5-1 against Texas Tech. This was the first meeting between the schools since December 2004.