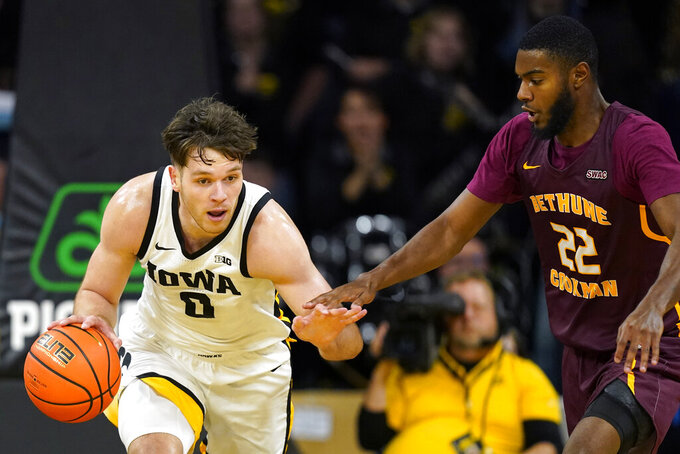 IOWA CITY, Iowa (AP) — Tony Perkins scored 16 points and led all five Iowa starters into double-figure scoring as the Hawkeyes opened the season with a 89-58 win over Bethune-Cookman Monday night.

The Hawkeyes won their 12th consecutive season opener and their first meeting with the Wildcats.

Iowa came out firing, knocking down seven first-half 3s and racing to a 54-35 lead at intermission. Patrick McCaffery hit the game's first 3 90 seconds into the game and Payton Sandfort hit two more to push the Hawkeyes to a double-digit lead, 17-6 four minutes into the game.

Perkins hit 7 of 9 shots from the field, including both of his attempts from beyond the 3-point arc, and dished five assists. Kris Murray added 14 points and Sandfort hit 3 of 9 from distance to add 13 points. Patrick McCaffery finished with 12 points and six assists and Filip Rebraca had 11 points and 10 assists.

Zion Harmon came off the bench to lead Bethune-Cookman with 15 points and seven assists. Marcus Garrett and Dylan Robertson added 13 and 11 points, respectively.