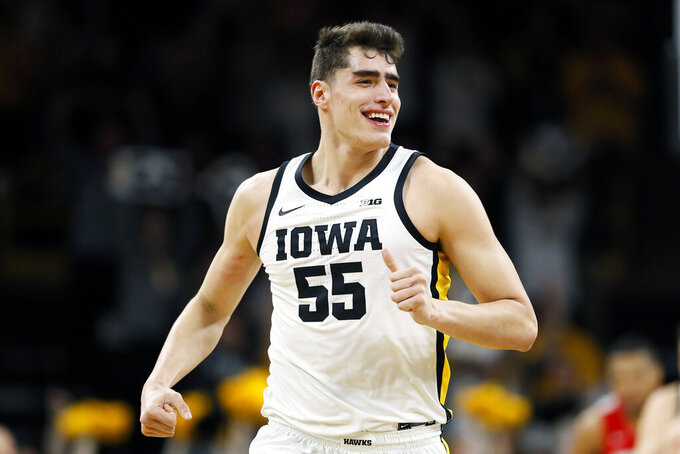 “This year was one I could never have imagined,” Garza said Friday. “None of the awards or accolades could have happened without the University of Iowa, my coaches, and my teammates. Choosing Coach (Fran) McCaffery and Iowa was the best decision I have ever made.

“The NBA has been my dream since I started playing basketball as a kid and I’m going to do everything I can to pursue that. If it ends up not being the right time to make the move to the NBA, I’m excited about the potential of what my senior season as a Hawkeye could have in store.”

Garza was runner-up to Dayton's Obi Toppin for Associated Press national player of the year after averaging 26.2 points in Big Ten games, making him the first player to average at least 26 in conference play since Purdue’s Glenn Robinson in 1994.

Garza scored a school-record 740 points this season, breaking the program’s 50-year old record. He scored 20 or more in a school-record 16 straight Big Ten games, the longest streak by any player since Ohio State’s Dennis Hopson (16) in 1987.

“Luka was one of the top players in the country last season and going through the NBA draft process is something that he should absolutely do,” McCaffery said. “We fully support Luka in the pursuit of his professional goals. This process is extremely valuable in gathering information from NBA personnel. My staff and I look forward to supporting Luka throughout the process.”

Players can enter the draft and maintain college eligibility if they don't sign with an agent and withdrawal from the draft by May 29. The draft is scheduled for June 25.