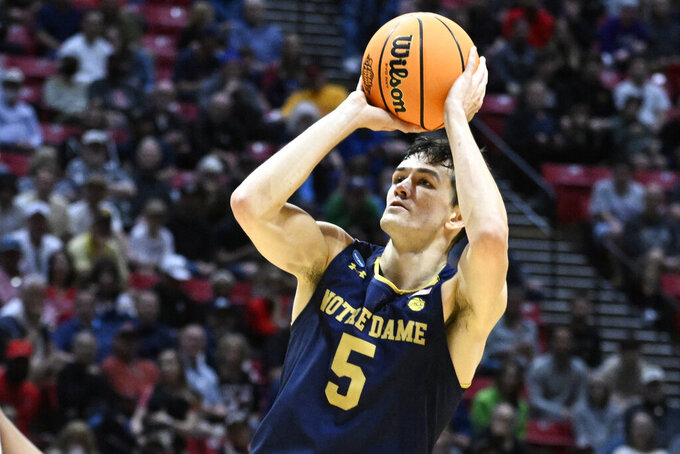 FILE - Notre Dame guard Cormac Ryan (5) shoots against Texas Tech during the second half of a second-round NCAA college basketball tournament game March 20, 2022, in San Diego. “We’ve got guys who can fill it up,” Ryan said. “I think that’s a huge weapon for us, and being able to stretch the floor, be versatile, I mean we’re a dangerous team.” z(AP Photo/Denis Poroy, File)

SOUTH BEND, Ind. (AP) — When Cormac Ryan looks at Notre Dame's roster, he admits he is one of the "grandpas.”

The Fighting Irish guard finds himself in a group of many.

With fifth and even sixth-year players peppering college basketball rosters everywhere thanks to the NCAA's eligibility rules, Notre Dame stands among the nation’s most experienced teams.

Ryan is one of six graduate students on the resurgent Irish, who went 24-11 last season, earned the program’s first NCAA Tournament bid in five years and won two tourney games. Ryan and the others returned to chase bigger and better dreams.

“This is a really neat group,” coach Mike Brey said. “They want to play deeper (into the tourament), they’ve learned how to win, they play the right way, we’ve improved defensively, and leadership has been great.”

Most of the veterans aren't just guys who have hung around; they're upperclassmen who have played key roles.

Ryan (9.2 points) was in the starting lineup for two-thirds of the Irish games over the past two seasons after making 17 starts in 2018-19 at Stanford. Guard Trey Wertz logged 72 career starts in splitting the past four seasons at Notre Dame and Santa Clara.

Even the lone incoming transfer, left-handed guard Marcus Hammond, made 85 starts at Niagara where he averaged 18.1 points last season and earned his All-Metro Athletic Conference honors for the third straight time.

Brey, now in his 23rd season in South Bend, knows all of this could create more success for a team that finished tied for second in the Atlantic Coast Conference last season.

Now, the old guys in South Bend are ready to make one more run at a couple of titles.

“Absolutely,” Ryan said when asked about the NCAA tourney loss serving as motivation. “As good as our season was, we felt like we still had something left in the tank. The end of that Texas Tech game still keeps a lot of us up at night.”

While the upperclassmen draw most of the attention, Brey may have his best freshman class in several years.

It includes highly touted 6-foot-4 guard JJ Starling and 6-8 forward Ven-Allen Lubin. Both are expected to make immediate impacts and Starling's long-range shooting could help replace Blake Wesley, who left for the NBA after leading the team with 14.4 points.

Goodwin made 70 3s and his 45.8% shooting percentage was the best by an Irish player in nine years. Laszewski and Ryan weren't far behind with each making 57 while shooting 45.6% and 40.7%. Hammond provides another option after making 68 and shooting 37% at Niagara.

“We’ve got guys who can fill it up,” Ryan said. “I think that’s a huge weapon for us, and being able to stretch the floor, be versatile, I mean we’re a dangerous team.”

Once the Irish get into conference play, their schedule will be among the ACC’s tougher ones given that they face No. 1 North Carolina twice and their single-game matchups with the league’s other ranked teams — No. 7 Duke and No. 18 Virginia — will each be on the road in February.

But the non-conference schedule, which opens Nov. 10 against Radford, is soft. The Irish play only two games outside South Bend and host Michigan State on Nov. 30.