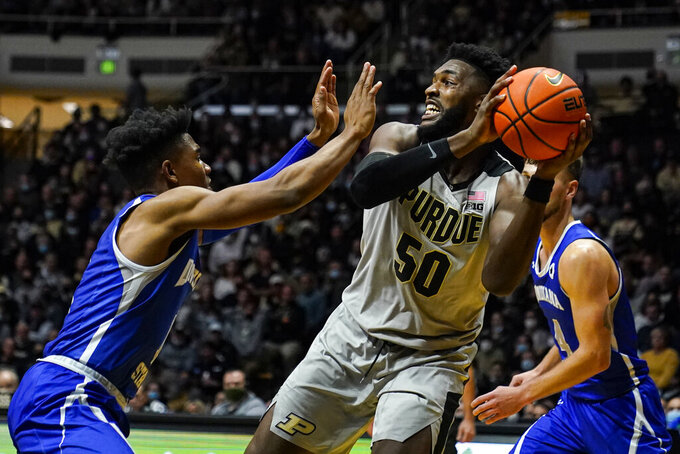 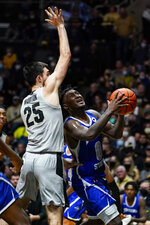 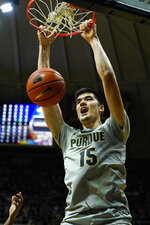 It was a knockout for No. 7 Purdue.

The two sophomore stars each posted career-high point totals — Ivey with 27, Edey with 22 — and led the Boilermakers to a 92-67 rout of Indiana State.

“When you're that big and have that kind of cargo, he's hard to deal with," coach Matt Painter said of Edey. “Jaden is someone who has to pick his spots and he did a much better job today of picking his spots."

They weren't just scoring, either.

Ivey had eight rebounds and four assists as the Boilermakers posted their first 2-0 start in three years. Edey added 10 rebounds and three blocks, one short of matching career highs in both categories.

Purdue dominated the middle all night — even with preseason All-American Trevion Williams coming off the bench.

Indiana State never had an answer to slow down the Boilermakers.

“They're elite on both ends of the floor, have incredible size and great talent," coach Josh Schertz said. “All the hype is legit and they have a chance to be the last team standing. We had to play a perfect game to have a chance tonight and we were far from that."

Cooper Neese led the Sycamores with 15 points and Cameron Henry had 10 for Indiana State (1-1).

Schertz knew his team was in trouble early in the first half.

Purdue sealed it by extending a 21-point halftime cushion to as much as 30. The Boilermakers won their fifth in a row in the series.

“Both of them are really good players and it's just a matter of getting their productivity to match their talent level," Painter said.

Indiana State: The Sycamores had a promising start in their season opener and looked solid in the early minutes Friday. But with eight new players on the roster, they were overmatched against a stronger opponent. Give Schertz time to see what he can do with this team.

Purdue: The Boilermakers looked every bit like the Big Ten title contender and possible Final Four team people expected before the season began. Through two games, they have done nothing to disappoint, and after making 16 3-pointers Tuesday, an opening-night school record, Purdue relied heavily on its big men Friday.

Purdue: Painter's team has been impressive in two straight blowout wins, so it won't be sliding down. The question is whether the Boilermakers will move up a spot or two.

Indiana State: Neese also had six rebounds. ... Micah Thomas had nine points and five assists. ... The Sycamores were outrebounded 42-31 and were 6 of 26 on 3-pointers. ... Indiana State is 14-47 against ranked teams since 1977 and hasn't beaten Purdue since 2006. ... Schertz announced earlier this week that all-conference guard Tyreke Key has had season-ending shoulder surgery.

Purdue: Freshman Caleb Furst had 12 points and eight rebounds while Williams finished with 11 points and eight rebounds. ... After making an opening-night school record 16 3s, the Boilermakers were 8 of 20 behind the arc. ... Purdue won has won 104 straight games when scoring 90 or more points since its last loss in November 1987. ... The Boilermakers are 18-2 against in-state schools since 2016-17 with the losses coming to Notre Dame in 2018 and Butler in 2019. ... Purdue has had 26 consecutive home sellouts, excluding games where the crowd was limited by COVID-19.

Indiana State: Opens its home season in a renovated facility on Sunday against Hanover.