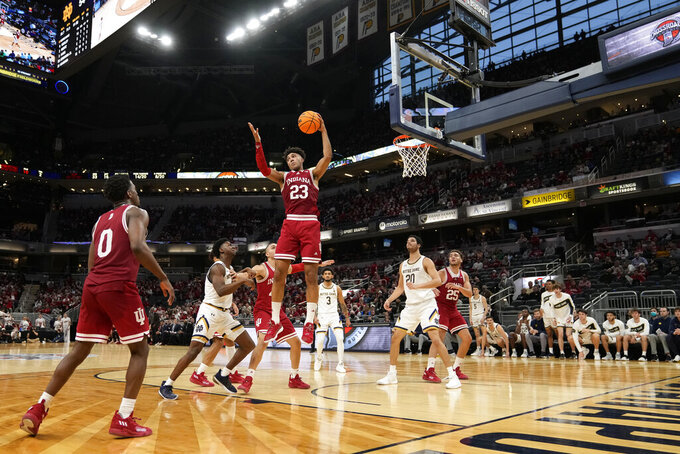 Jackson-Davis, who has 26 career double-doubles and three this season, had a dunk and a pair of free throws to finish off an 12-3 surge for the Hooisers (9-2) as they broke away from a tie at 46, outscoring Notre Dame 18-10 over the final 8:11.

Race Thompson and Xavier Johnson each scored 11 for Indiana. Thompson, who was 4 for 4 from the field Saturday has made his last 10 shots.

Prentiss Hubb made a 3-pointer as the Fighting Irish (4-5) came from 10 points down into a 46-all tie after an 11-1 run. There were five lead changes in the first half but the second was all Hoosiers. Notre Dame made just two if its first nine shots after halftime as Indiana built a 10-point lead.

Dane Goodwin led the Irish with 15 points and six rebounds, Blake Wesley added 14 points and Paul Atkinson notched his second double-double of the season with 11 points and 11 boards.

Jackson-Davis made a pair of free throws that kicked off a 15-3 run to close out the first half with Indiana scoring eight unanswered over the last 4:22 to grab a 30-27 halftime lead.

The Hoosiers had the best record of the all-Indiana colleges in the Crossroads Classic at 8-3, 5-1 against the Irish.