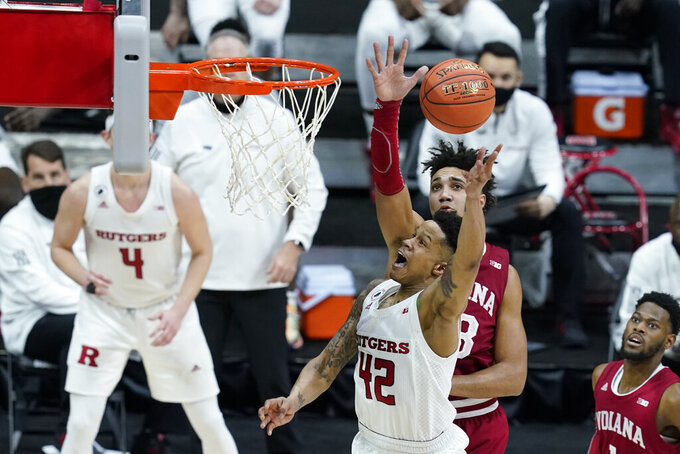 Rutgers' Jacob Young (42) puts up a shot against Indiana's Trayce Jackson-Davis (23) during the second half of an NCAA college basketball game at the Big Ten Conference tournament, Thursday, March 11, 2021, in Indianapolis. (AP Photo/Darron Cummings)

One week with coach Mike Woodson convinced Trayce Jackson-Davis he wanted to stick around and revive Indiana's program.

The decision could help convince a few more players to stay.

Less than a week after Woodson accepted the job at his alma mater, Jackson-Davis made the announcement Hoosiers fans had been waiting for — he'll return for his senior season.

The decision is the biggest yet in what has been a transformational week for Indiana basketball.

Athletic director Scott Dolson named Woodson the coach Sunday then re-introduced the former Indiana star and longtime NBA coach Monday. Woodson told reporters then he hoped at least some of the six players in the transfer portal would come back next season.

Parker Stewart, a graduate transfer who did not play last season, announced on Twitter that he would be back. Since then two recruits — 6-foot-9 forward Logan Duncomb from Cincinnati and 6-5 guard C.J. Gunn from Indianapolis — have reportedly said they also plan to stay with the Hoosiers. Gunn has one more year of high school ball.

Now Woodson has his biggest piece in place — Jackson-Davis, who averaged 19.1 points and 9.0 rebounds, the only power-five conference player to top 19 points and nine rebounds. He was the 2019 IndyStar Mr. Basketball Award winner and an honorable mention All-American last season.

And the hiring of Woodson made a difference to Jackson-Davis.

“We had a sitdown for two hours with coach Woodson yesterday and talked about my future, where he believes and sees me in the offense, how he can help develop me into the player that I aspire to be, also winning basketball games," Jackson-Davis said. “He told us he doesn't want to rebuild, he wants to win right away. He said I'm a big piece of that. After hearing an NBA coach tell you that, it just really was a simple decision."

The lingering question is how many of Jackson-Davis' teammates will join him?

Aljami Durham already has announced he's transferring to Providence. Four other players — guards Armaan Franklin and Khristian Lander and forwards Race Thompson and Jordan Geronimo — all remain in the transfer portal. Jackson-Davis sounds like he expects center Joey Brunk, who missed the entire season after having back surgery in December, also to return.

And now, after getting a chance to know Woodson, Jackson-Davis will be back.

“I was almost dead set on entering the draft and hiring an agent, that was probably two weeks ago," he said. “So I sat down with him and we talked a little bit. I really liked him. But my parents were still dead set on me going to the NBA. I said, ‘How about you come down, dad, and give him a chance, see what he has to say?' My dad came out of the room, he said, ‘Give us five minutes. We went out of coach Woodson's office, went into a little meeting room, and he said, ‘You're staying.'