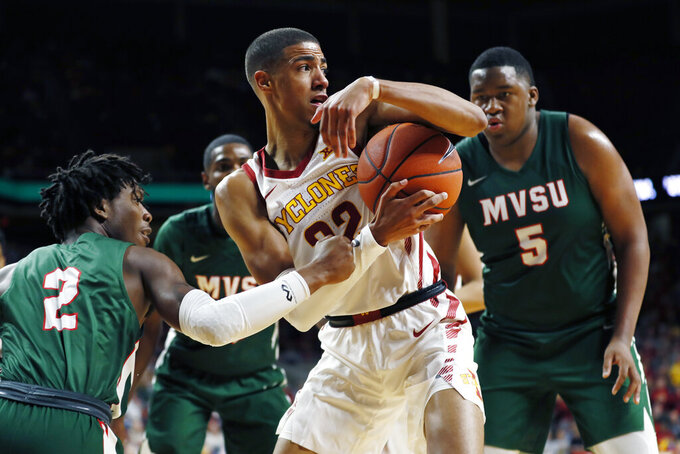 It likely won't be the last time the Cyclones' sophomore dominates multiple aspects of a game in 2019-20.

But Haliburton stole the show with 12 points, 14 assists, seven rebounds and six steals for the Cyclones. Led by Haliburton's elite distribution, Iowa State had 32 assists, three shy of the school record, on 45 made baskets.

Iowa State used first-half runs of 15-0 and 16-0 to put away MVSU, which might be the least experienced team in the country. Though the Cyclones struggled at times in their half-court defense, they were pests in transition. Iowa State forced 17 turnovers in the first half and 21 overall.

"Some defensive things we've got to clean up. But it's early, and kind of our slogan is 'Race to Maturity,'" Prohm said. "We've got to continue to mature."

The Cyclones led 56-33 at halftime despite hitting just 5 of 19 3s. Iowa State heated up in the second half though, finishing 13 of 35 from beyond the arc.

Prentiss Nixon scored 16 points in his debut for the Cyclones, and Solomon Young added 12 in his first game back after a medical redshirt season a year ago.

Haliburton, a first-team All-Big 12 preseason pick, said he was most pleased about his effort on the glass.

"That's what coach Prohm and the staff challenged me with this summer... becoming a better rebounding guard," Haliburton said. "That sticks out to me."

Penn State transfer Rasir Bolton had nine points in 19 minutes before leaving because of cramps. Iowa State sat him the rest of the game as a precaution, and Prohm said he thinks Bolton will be fine moving forward.

Michael Green had 22 for the Delta Devils.

Iowa State: If the opener is any indication, Haliburton and Bolton will lead the team in minutes. Freshman guard Tre Jackson cracked coach Steve Prohm's notoriously tight rotation for the opener, as did sophomore bigs George Conditt and Zion Griffin in reserve roles. Griffin scored 11 points with six boards and Conditt had 10 points in 10 minutes.

MVSU: The Delta Devils, led by first-year coach Lindsey Hunter — the former NBA player and one-time interim head coach in Phoenix — have a lot of work to do. MVSU lost a staggering 14 out of 17 players from last year's team. But considering that the Devils went 6-26 in 2018-19, maybe that's not a bad thing.

Nixon also had four assists and four steals, and he didn't commit a turnover. ...Bolton also had six rebounds, five assists and a steal. ...Jackson was 3 of 8 on 3s and finished with 11 points. ...Jacobson, a center, was 8 of 13 shooting and 3 of 5 on 3s. If Jacobson can make teams flex out to defend him on the arc, it should open things up inside for Iowa State's undersized guards to attack the basket.

"It's been huge. I'd say it's been the main focus. I try and work on it every day," Jacobson said about his 3-point shooting. "

The Delta Devils continue their bye game tour with a trip to Utah on Friday.