James Madison gets 1st win in 12 tries against Virginia 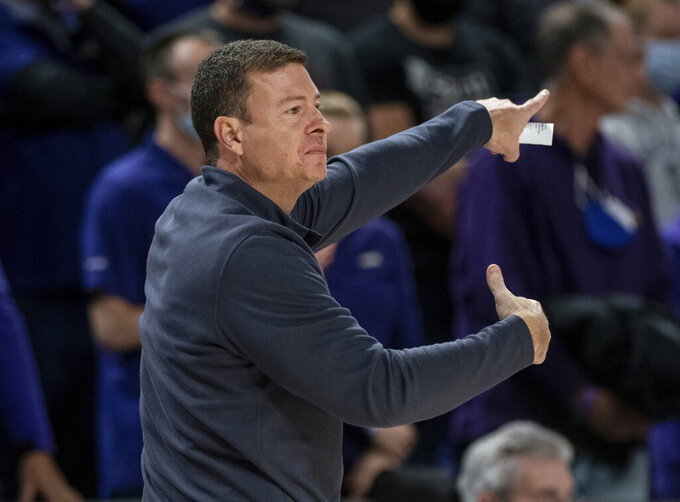 James Madison head coach Mark Byington motions to his a team during the first half of an NCAA college basketball game against Virginia in Harrisonburg, Va., Tuesday, Dec. 7, 2021. (Daniel Lin/Daily News-Record via AP) 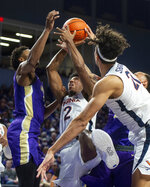 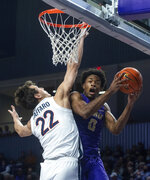 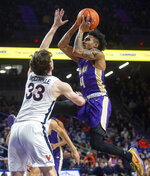 HARRISONBURG, Va. (AP) — Takal Molson made a go-ahead basket with 1:10 remaining and James Madison held off Virginia 52-49 on Tuesday night for its first win against the Cavaliers in 12 attempts.

Molson spun in the lane and hit an off-balance shot with 22.1 seconds left for a three-point lead. Kihei Clark missed a 3-pointer at the other end, Virginia's 21st miss from distance, and Terell Strickland was fouled. Strickland missed the free throw and Armaan Franklin got it to midcourt for a heave at the buzzer but it didn't hit the rim.

Many of the fans, in the first sellout at the Atlantic Union Bank Center, rushed the court to celebrate the program's first win over the Cavaliers. Virginia, located just an hour apart from JMU’s campus, last visited Harrisonburg on Nov. 14, 2014, winning 79-51 in the final sellout at the JMU Convocation Center.

James Madison (8-2) controlled the final 12 minutes of the first half, going on a 22-1 run for a 24-11 lead as Virginia missed its first 13 3-point attempts. The Cavaliers went without a point for nine-plus minutes. Clark ended Virginia’s field-goal drought with a 3-pointer on the final shot of the first half to pull within 24-14. The Cavaliers turned it over nine times in the opening 20 minutes.

Virginia took its first lead of the second half with 3:50 left on Franklin’s floater in the lane to cap a 10-0 run. JMU was held scoreless for three-plus minutes during the run. The Cavaliers missed five of their final six shots.

Jayden Gardner secured a double-double midway through the second half and finished with 12 points and 14 rebounds for Virginia (6-4).

No player reach double-digit scoring for JMU. Molson finished with eight points on 4-of-8 shooting.

The lights went out at the 8,500-seat arena to begin the second half, and play was paused before restarting a few seconds later. The on-campus arena opened last season, but had limited attendance because of indoor restrictions due to the pandemic.