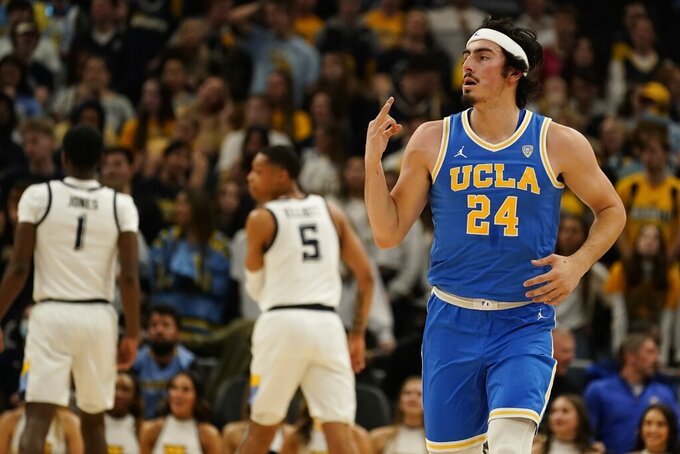 UCLA's Jaime Jaquez Jr. reacts after making a three-point basket during the first half of an NCAA college basketball game against MarquetteSaturday, Dec. 11, 2021, in Milwaukee. (AP Photo/Morry Gash)

MILWAUKEE (AP) — No. 4 UCLA's biggest scare of the weekend came the night before its actual game against Marquette, when its private chartered flight to Milwaukee was diverted to Denver due to a cracked windshield.

“We had to land as fast as possible,” UCLA coach Mick Cronin said. “We were able to do that. We’re all fortunate. We all know how fortunate we are.”

The Bruins flew out of Denver early Saturday morning and landed in Milwaukee at about 10 a.m., feeling grateful.

“We didn’t realize the severity until after,” Jaime Jaquez Jr. said. “We didn’t know how bad it really was. Thankfully by the grace of God, we all got (in) safe.”

Originally scheduled at 1:30 p.m. Saturday, the game was pushed back by seven hours. UCLA showed up, especially Jaquez, who had 24 points and 11 rebounds, in a 67-56 win over Marquette.

Johnny Juzang and Tyger Campbell had 12 points each for UCLA, and Campbell also had eight assists and five rebounds.

“It says a lot about their guys and their character level, to come in and play with the type of energy and fight that they had under less than ideal circumstances,” Marquette coach Shaka Smart said.

UCLA (8-1) showed no apparent signs of rust in its first game since its 73-61 victory over Colorado on Dec. 1. The Bruins were supposed to play at Washington on Dec. 5, but the Huskies had to forfeit that game due to COVID-19 issues within their program.

Marquette's Greg Elliott scored a career-high 22 points off the bench. Justin Lewis had 12 points and nine rebounds but missed all seven of his 3-point attempts, and Darryl Morsell added 11 points.

The Golden Eagles (8-3) spent most of the first half misfiring from 3-point range, which was particularly troublesome since nine of Marquette’s first 11 field-goal attempts were from behind the arc.

Marquette cut the margin to 47-36 on another Elliott 3-pointer with 18:58 left, but the Golden Eagles wouldn't get the deficit into single digits until the game's final minute.

By that point, it was apparent that UCLA's unusual trip was going to end in a typical manner with another Bruins victory.

“I don't even think it's like hit us, what actually happened,” Jaquez said. “It's in the past now. It's just one of those stories you can tell later on in life.”

UCLA: The Bruins were in control throughout, outrebounding Marquette 48-37 and having a 19-7 edge in second-chance points.

Marquette: The Golden Eagles have faced four Top 25 teams this season, losing three of them. The lone win was a one-point victory over then-No. 10 Illinois on Nov. 15. ... Elliott shot 6 of 9 from 3-point range, but his teammates were a combined 2 of 24. Elliott scored 14 points in a span of five minutes midway through the game. Before Saturday, Elliott had scored 23 points all season.

No. 1 Purdue lost this week. If No. 2 Baylor falls to No. 6 Villanova on Sunday, UCLA at least ought to move into the top three.

Marquette: At Xavier on Saturday in its Big East opener.