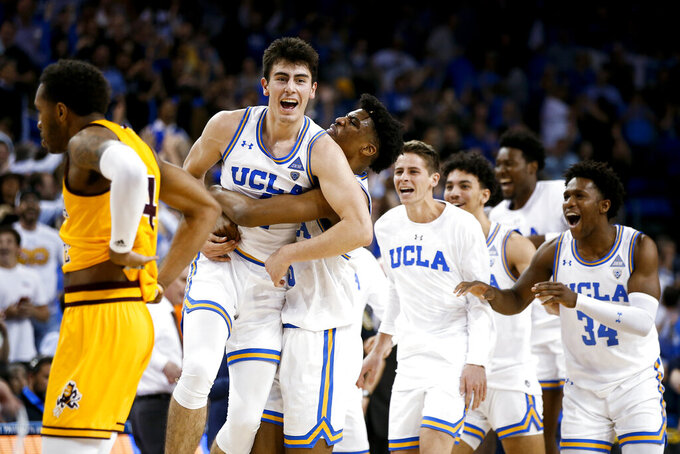 LOS ANGELES (AP) — Jaime Jaquez had practiced driving down the floor and hitting the game-winning shot plenty of times in a park while growing up. On Thursday night he got to do it for real.

The UCLA freshman hit a 3-pointer from the top of the key with .6 seconds remaining to give the Bruins a 75-72 victory over Arizona State and a share of the lead in the Pac-12 Conference.

“It is something you dream about a lot — battle for first place and hitting the shot. To do it tonight was amazing and an unreal feeling,” said Jaquez, who was one of five UCLA players in double figures with 18 points.

Tyger Campbell tied it at 72 with a free throw in the final minute but the Bruins were called for a lane violation on the second attempt. Arizona State's Remy Martin — who scored a game-high 30 points — missed a 3-pointer, which set the stage for Jaquez's game-winner.

UCLA coach Mick Cronin didn't call a time out after Martin's miss because he didn't want Arizona State to come out with a zone defense. Cronin said the original plan was for Campbell to drive into the paint and hopefully draw a foul.

“At the end you have to trust your players,” said Cronin, who is in his first season with the Bruins.

The Bruins (18-11), who were 8-9 and 1-3 in the conference at one point, have won six straight and 10 of their last 12. They are tied with Oregon atop the conference at 11-5. UCLA hosts Arizona on Saturday before finishing the regular season at Southern California on March 7.

“This is a tremendous win for our team. It was a great game. We made one more play,” Cronin said. “We are trying to build faith in our team and the fan base. We're still a bubble team and we have to rest up. That's the reality of our situation.”

Arizona State (19-9) — which beat UCLA by 18 in the first meeting on Feb. 6 — had its seven-game winning streak snapped and is a half-game back at 10-5. The Sun Devils last two losses have come on last-second shots.

“We have really been on the right side of many of these games,” Arizona State coach Bobby Hurley said. “It was a tough contested shot. I just wish one of our guys had that opportunity.”

Jake Kyman tied a career high 21 points, with 19 coming in the first half, and Jalen Hill added 13 for the Bruins.

It was Martin's second game with 30 or more points this season. Rob Edwards added 23 for the Sun Devils, including seven 3-pointers.

Arizona State jumped out to a 24-14 lead before UCLA responded with 11 straight points as part of an 18-2 run. Kyman scored 14 during the rally, including three straight 3-pointers. A 3 by Edwards pulled Arizona State within 36-35 with 1:04 remaining before the Bruins scored the final five points to go up 41-35 at halftime.

UCLA extended its lead to nine with 11:44 remaining on a dunk by Hill but the Sun Devils went on a 14-4 rally to grab a 60-58 advantage three minutes later as Edwards powered the run with eight points.

There would be five ties and seven lead changes the rest of the way.

Arizona State: Alonzo Verge Jr. was averaging 20.6 points off the bench during the Sun Devils winning streak but struggled against the Bruins. The junior guard was saddled with early foul trouble and had just 12 points in 23 minutes before fouling out.

UCLA: Campbell had a career high 14 assists, marking his second straight game with 10 or more. He had 11 in last Saturday's win at Colorado.

UCLA: Hosts Arizona on Saturday in its last home game of the season.