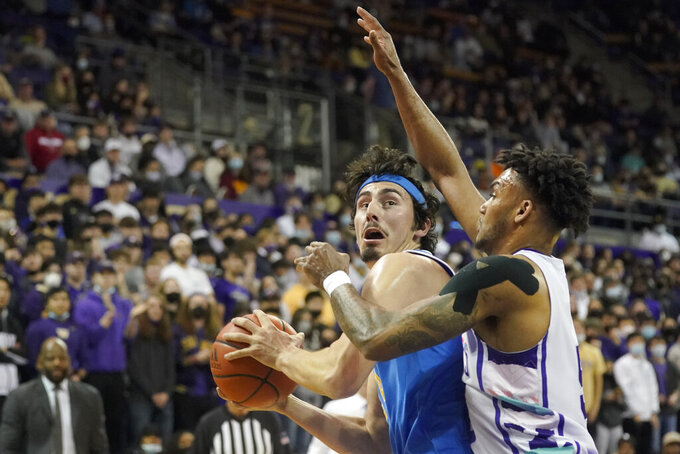 SEATTLE (AP) — If this is the kind of production UCLA is going to get from Jaime Jaquez Jr., the Bruins are going to be very dangerous this March.

Jaquez scored a career-high 30 points, and No. 17 UCLA rallied after a sluggish first half and beat Washington 77-66 on Monday night.

Jaquez was nearly unstoppable on the interior in the second half, scoring 17 points after halftime and hitting 11 of 17 shots in the game. Jaquez’s previous career-high was 27, accomplished twice, including earlier in February against Arizona State.

Jaquez has been slowed this season by injuries to both ankles, but seems to be regaining strength and finding the form he had earlier in the year. Jaquez has scored in double figures and played at least 26 minutes in each of the last four games.

“We were able to get Jaime the ball down low in the second half and that changed the game for us," UCLA coach Mick Cronin said. "Him getting back healthy and me trying to get him back in an offensive rhythm, it takes us to another level.”

Jules Bernard added 12 points and the Bruins (22-6, 14-5 Pac-12) won for the fifth time in six games heading into their regular-season finale against rival USC on Saturday.

UCLA leading scorer Johnny Juzang missed his second straight game due to an ankle injury. Juzang was injured in last Thursday’s loss at Oregon when he was limited to just 11 minutes and finished with a season-low seven points.

UCLA led by as many as 22 points, and the win ensured the Bruins will be no worse than the No. 3 seed for the Pac-12 tournament next week in Las Vegas.

“I fully expected us to have to win a very close game,” Cronin said. “So the fact that we were able to get up 20 and get the subs in was a testament to our defense.”

Pac-12 scoring leader Terrell Brown Jr. led Washington (14-14, 9-9) with 20 points, and was limited to 9-for-20 shooting. Jamal Bey added 14 points and Langston Wilson scored 11, including a pair of late 3s that trimmed the final margin.

The matchup, originally scheduled for early December, was postponed due to COVID-19 cases within the Huskies' program.

“I felt the second half was we just couldn’t stop them, and then we had some shots that we got to be able to knock down to keep it closer, keep the crowd involved,” Washington coach Mike Hopkins said.

Washington led 29-25 at halftime despite getting just six points from Brown, who was held scoreless for the first 17 minutes. It was the seventh time this season UCLA trailed at halftime, and the Bruins were 1-5 in the previous six games.

But UCLA started the second half with a flurry, led by Jaquez. The Bruins scored the first nine points and began the half on a 20-4 run and took a 45-33 lead on Tyger Campbell’s floater. Campbell had missed his first eight shots before hitting with just over 12 minutes remaining.

UCLA shot nearly 60% in the second half.

“They tried to get the ball in the paint, put them in situations," Hopkins said. "They were really physical, did a good job executing and it seemed like they were getting a layup, an and-one, or going to the foul line and we couldn't stop it.”

UCLA: The Bruins finished the regular season 7-4 in road games. ... Jaquez became the 59th player in school history to score at least 1,000 points in a career. ... UCLA’s only previous win this season when trailing at halftime came at Utah in January.

Washington: G Daejon Davis appeared to reinjure his right shoulder late in the first half on a drive to the basket. Davis was injured in early February at Stanford and missed five games. He returned in last Saturday’s win over Washington State.