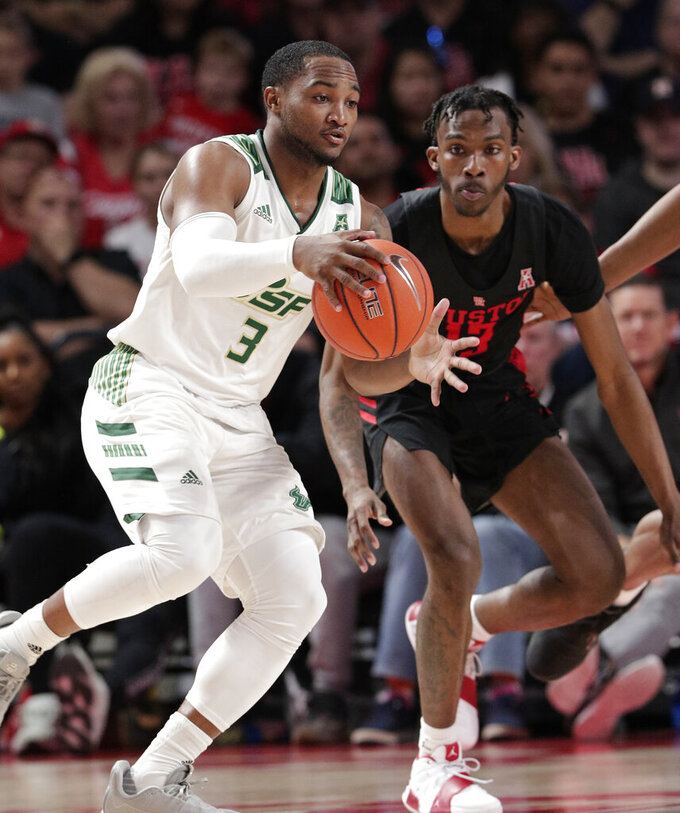 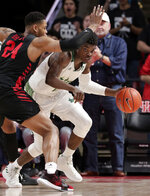 HOUSTON (AP) — When South Florida closed within one late in the first half, Corey Davis Jr. said the Cougars got greedy.

Houston quickly extended its lead and never looked back.

DeJon Jarreau scored 17 points, Davis added 15 and No. 9 Houston won its 11th straight with a 71-59 victory over South Florida on Saturday night.

"When we get into situations like that, we just somehow, some way find a way to make the right plays, get the right defensive stops, get a rebound, hit some 3s," Davis said. "It always falls in our favor. I think that all comes down to us playing how hard as we usually play."

Houston (26-1, 13-1 American Athletic Conference) shot 48 percent and never trailed in its 33rd straight home victory. Davis was 4 of 9 on 3-pointers as the Cougars shot 8 of 21 from behind the arc.

"I think this late in the season, you're trying not to be openly analytical," Houston coach Kelvin Sampson said. "I can come out with a litany of things we need to get better on, but I thought the key tonight was our halfcourt man-to-man defense was outstanding."

David Collins had 12 points on 2-of-14 shooting from the field and grabbed eight rebounds, and Alexis Yetna added nine points for USF (18-9, 7-7).

"We had some clean looks, and when you play them, every open shot feels like you have to make every one," USF coach Brian Gregory said. "We needed an 'A' shooting night against them, and obviously, we didn't get that. A lot has to do with their defense."

The Bulls shot 31 percent from the field.

"That's as good a defensive team as there is in the country," Gregory said. "Not only are they really solid defensively, but they got multiple bodies that can be thrown at you."

Houston jumped out to an 11-0 lead, hitting its first four field goals, including two 3-pointers from Davis. Trailing 23-13 with 8:44 left in the first half, USF went on a 10-1 run to cut the lead to one on Yetna's layup with 5 minutes remaining.

Houston finished the half on a 10-3 run to take a 34-26 halftime advantage behind seven points from Jarreau and Fabian White Jr.

The Cougars scored the first seven points out of the break to push the lead to 41-26 on Davis' 3-pointer 1 ½ minutes in the second half. USF got no closer than 12 the rest of the way.

South Florida: The Bulls started 0 for 7 from the field and finished the half 7 for 25. USF struggled from behind the arc, shooting 8 for 27, but also committed 15 turnovers. The Bulls outscored Houston in second-chance points 13-4.

With the win in their lone game of the week, the Cougars could rise in the rankings.

FACES IN THE CROWD

Rams defensive coordinator Wade Phillips and Ravens linebacker Tyus Bowser sat courtside next to Houston's radio, while Saints running back Alvin Kamara sat next to the USF bench. Kamara is a friend of Jarreau's.

"That is somebody I met through mutual friends," Jarreau said. "He was close to my cousin who passed away. I met him as soon as he got drafted to the Saints. From there, we gained a relationship and bonded and he took me under his wing. He is kind of mentoring me because he took the same route that I took going to a school, transferring to a (junior college) and coming back and having success at another college."