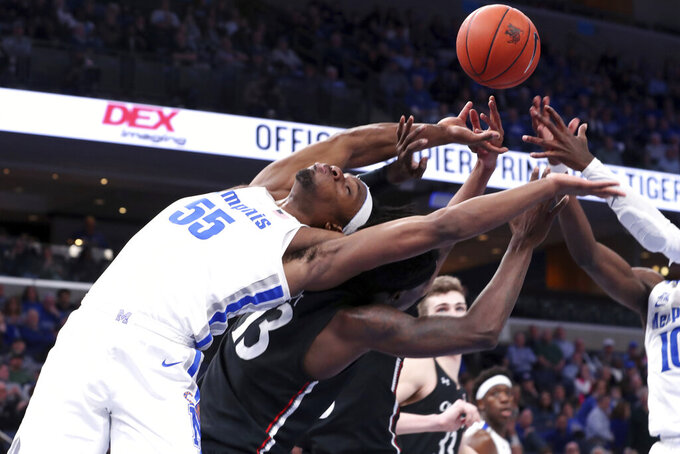 Memphis' forward Precious Achiuwa (55) goes all in for a rebound in the second half of an NCAA college basketball game against Cincinnati Thursday, Jan. 16, 2020, in Memphis, Tenn. (AP Photo/Karen Pulfer Focht)

MEMPHIS, Tenn. (AP) — In a game where rallies were answered by rallies and droughts crept in, No. 22 Memphis was able to close the game for its second straight win.

“It was a tale of runs,” Cincinnati coach John Brannen said.

Jarron Cumberland, the defending American Athletic Conference player of the year, led Cincinnati (10-7, 3-2) with 19 points, while Keith Williams scored 12, going 4 of 14 from the field, part of the Bearcats struggling to a 30% shooting night. Brannen noted that his team missed 19 shots at the rim, some of those turned away by eight Memphis blocks.

“Their defense is elite,” Brannen said. “They’ve got one of the top defensive teams in the country. …You can’t have missed opportunities in front of however many people were here against a Top 20 team. You can’t.”

Memphis had stretched a 31-20 halftime lead to 15 points early in the second half, but the Bearcats crafted a 13-0 rally to pull close. The run would eventually reach 18-2, giving Cincinnati a 38-37 lead on a 3-pointer by Cumberland with 12:37 left.

But in a game of runs, Memphis answered with 10 straight points to take the lead for good as Cincinnati managed only one field goal – a 3-pointer in the closing seconds – over the final 4:34.

“I was disappointed in the last three minutes,” Brannen said. “Our character the last few minutes wasn’t great.”

A key moment came with 3:31 left and Memphis clinging to a 50-46 lead. Brannen thought Cumberland was fouled on a drive and his vociferous reaction drew a technical. Quinones converted the two free throws and Memphis scored on a layup on the ensuing possession, taking the lead back to eight, 54-46.

“That was something that was huge,” Memphis coach Penny Hardaway said. “Jarron (Cumberland) always drives to the basket, and he almost torpedoes himself into the players. All we talked about this week was verticality jump to where we weren’t going to foul him. If you do the verticality jump, (officials are) going to reward the defense.”

Memphis used a late-first quarter burst, including seven straight points to lead at halftime. Whether from defense or inaccurate shooting, the teams went long stretches of the first half without scoring.

At one point, the score was stuck at 9-4 for almost five minutes.

In the final minutes, it was Memphis closing the game with a 10-3 burst. And Hardaway thinks the experience of overcoming a deficit will help his team the rest of the season.

“I think that will be rewarded,” Hardaway said, “because we’ve been in a ton of battles. More than I want. But when we’ve been in games where you’ve been down and come back and won, that’s what this team has shown.”

Cincinnati: Much of the game, the Bearcats relied on Cumberland for offense, everything going through the reigning conference player of the year. While Cumberland scored above his 13.3 average, he got little help from others.

Memphis: The Tigers had retaken the lead when Quinones got untracked offensively, his scoring in the closing minutes stretching Memphis's advantage. Achiuwa again was solid for Memphis, but Jeffries, who recently recovered from the flu, provided the necessary offense.

Memphis only dropped one spot in last week’s poll despite a road loss to No. 16 Wichita State. With no games scheduled through this weekend, the Cincinnati win should at least hold the Tigers in the No. 22 spot or higher depending on other teams above them.

Brannen said he didn’t understand why he got the technical late in the game as Memphis made its final run, but he didn’t think that affected the outcome. “I felt like there should have been a foul,” he said. “I didn’t curse the official. Not sure why I got a technical. … I guess I got too mad at him.”

Memphis: plays at Tulsa next Wednesday.