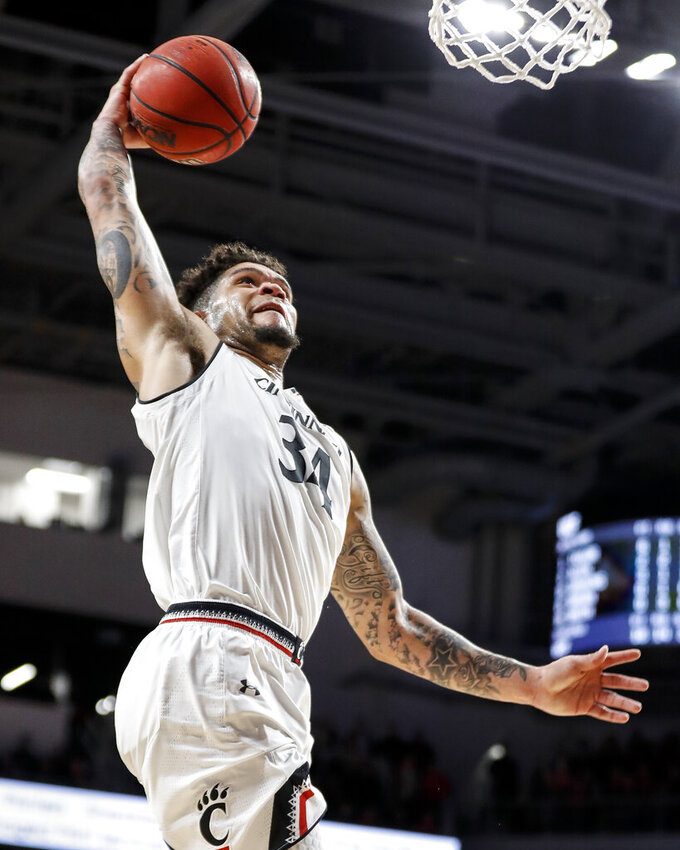 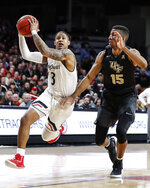 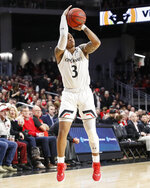 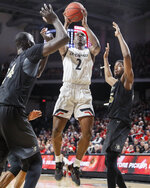 CINCINNATI (AP) — Justin Jenifer knew the shot clock was down to a few seconds. He saw a small opening to the basket and knew that UCF's shot-blocking center would close it in a hurry.

He took the risk and made the shot that changed the game. Jenifer's layup barely eluded 7-foot-6 Tacko Fall's outstretched hand and put Cincinnati ahead to stay Thursday night.

He added a 3-pointer with 19.9 seconds left, rallying the Bearcats to a 60-55 victory in a matchup of two of the American Athletic's top defensive teams.

The senior point guard snatched the late momentum by lofting the ball high off the backboard for a 50-48 lead with 3:12 to go. If Fall managed to deflect the ball, it would have been a shot clock violation and a turnover.

"I'm lucky I got it off the glass," Jenifer said. "I took a leap of faith when I shot it."

The Bearcats (22-4, 11-2) overcame an eight-point deficit behind its senior point guard, who finished with 12 points. He closed it out with a pair of free throws with 12.9 seconds to go. It was the sixth time this season that Cincinnati has overcome a deficit of at least eight points to win a game.

"They've been in those moments a few more times than we have, and they made the plays down the stretch," UCF coach Johnny Dawkins said. "They showed why they've been one of the best teams in our conference."

Jarron Cumberland, who leads the AAC in scoring and had 27 points in each of the last two games, was limited to 11 points . He missed all of his six shots from the field in the second half, when he was limited to a pair of free throws.

Aubrey Dawkins scored 18 for UCF (19-6, 9-4), which had won its last three games and had another one within grasp, only to let it slip away . The Knights had been 9-0 this season when allowing 63 points or less.

"Now you see why they were picked to win our league," Cincinnati coach Mick Cronin said. "That being said, our kids refused to give up. There were a lot of times we could have packed it in."

Cincinnati led 26-18 at halftime, taking advantage of UCF's worst opening half of the season. The Knights had 15 turnovers — one shy of their season high for an entire game — that set up half of the Bearcats' points.

UCF opened the second half with an 18-2 run for a 46-38 lead as Cincinnati missed seven of eight shots and had four turnovers. The Bearcats tied it 46-46 on Keith Williams' put-back and free throw, and Jenifer's layup put them ahead to stay.

UCF: The Knights were picked to win the league in the coaches' preseason poll. They could have moved into a second-place tie with the Bearcats, trailing Houston. Instead, they're trying to catch two teams down the stretch for the league title.

Cincinnati: The Bearcats remain on the verge of returning to the Top 25. They were the first team out this week.

Fall won the opening tip, leaving him 25 for 25 this season. UCF has won 29 straight tip-offs since last season.

Williams landed awkwardly and was helped off the court with 16:11 left in the first half. He returned 4 minutes later and finished with 12 points.

Dawkins got a technical foul late in the first half for something he said to an official.

Cincinnati plays at UConn on Sunday. The Bearcats beat the Huskies 74-72 in overtime on Jan. 12.