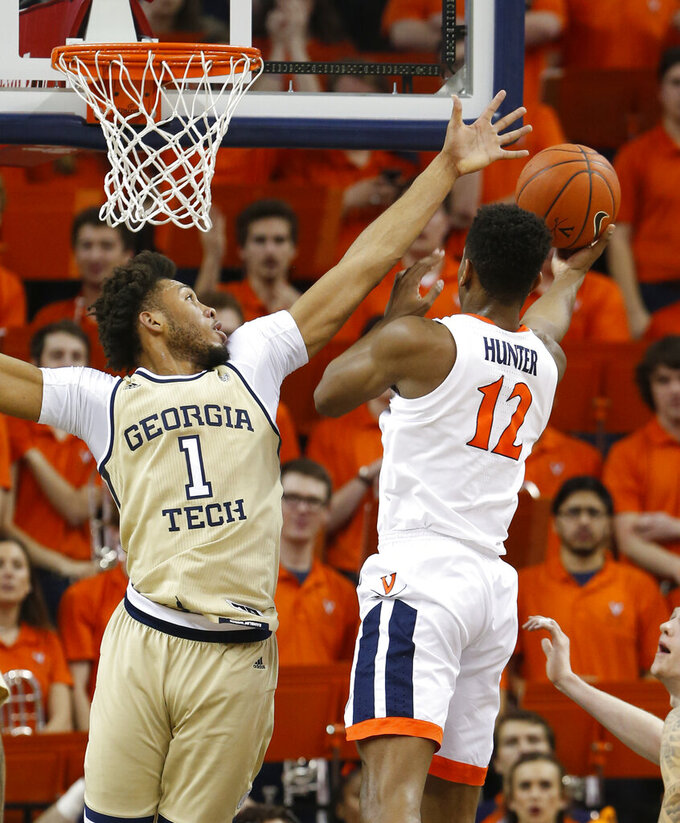 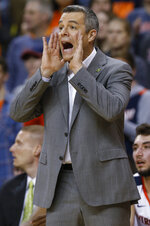 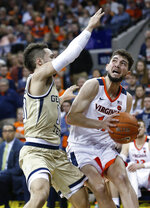 CHARLOTTESVILLE, Va. (AP) — With a No. 2 ranking, one of the nation's top defenses and a culture of success, Virginia has lofty goals for this season.

The Cavaliers made their road a bit easier Wednesday night, beating Georgia Tech 81-51 to secure a double bye for the Atlantic Coast Conference Tournament, their first postseason stop on the way to what they hope will be a Final Four appearance in Minneapolis.

"That's an awesome accomplishment. It really is and we're thankful for that," said Ty Jerome, who led Virginia with 19 points. "You never want to take anything for granted. We worked really hard to do that. ... but we have such a long way to go, so much better to get, so we've just got to keep working."

De'Andre Hunter had 18 points and the Cavaliers (25-2, 13-2 Atlantic Coast Conference) took command against the reeling Yellow Jackets with a 25-4 first-half run and moved back into a tie with No. 5 North Carolina atop the ACC standings.

It happened in typical Virginia fashion. They trailed 11-7 before a 3-pointer by Braxton Key sparked the eight-minute surge. Hunter had nine points, Kyle Guy six and Jerome five in the burst. Virginia's lead was 41-22 at halftime and 51-24 after a 10-2 run to start the second half.

Hunter scored 14 of his points in the opening half and made things easier for his teammates, Jerome said.

"Dre did a good job of making shots early attacking from the high post," he said.

"If they play like they did tonight, they'll win the national championship," Yellow Jackets coach Josh Pastner said.

Key came out of a shooting slump in the Cavaliers' victory at No. 20 Virginia Tech nine days ago with a pair of key 3-pointers, and Kihei Clark did the same against the Yellow Jackets, making all three of his shots, including a pair of 3-pointers.

"You're always happy for the person," Jerome said. "People keep coming up big when we need it the most. Braxton made shots at Virginia Tech and Kihei made shots today. I tell everyone, 'If you've got a good shot, you've got to shoot it and shoot it with confidence.'"

Guy scored 11; Clark, Key and Jay Huff had eight each; and Mamadi Diakite had seven for Virginia.

Georgia Tech: The Yellow Jackets are very young with only two seniors on the roster, and neither Abdoulaye Gueye nor Brandon Alston contributed much until Gueye made a few baby hooks in the second half. Gueye played 8:40 and scored six points, and Alston was scoreless in 6:42. In Pastner's third season as coach, the turnover has been significant, but the results have been slow to follow.

Virginia: Coach Tony Bennett went with a new starting five of Clark, Jerome, Guy, Hunter and Diakite. It's the third game in a row Bennett has juggled combinations, with Jack Salt and Braxton Key also getting starts in that span. Salt had started every ACC game before Wednesday night. "I thought that group finished the game really well at Louisville," Bennett said.

Georgia Tech: The Yellow Jackets are home for a game against Boston College on Sunday.

Virginia: The Cavaliers remain at home and face Pittsburgh on Saturday.