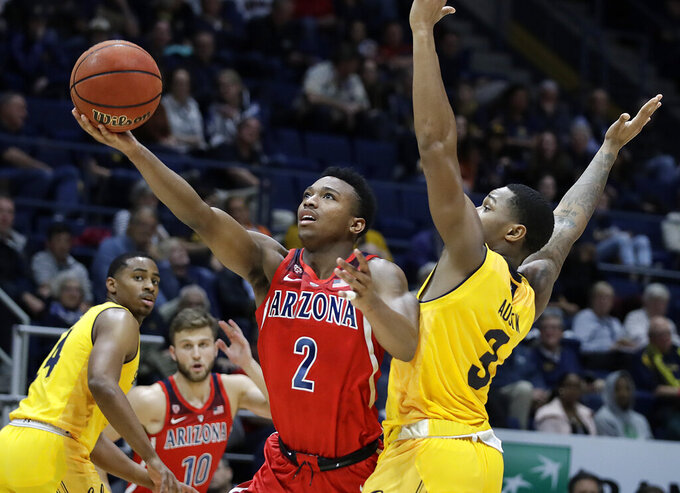 Arizona's Brandon Williams (2) lays up a shot past California's Paris Austin, right, during the second half of an NCAA college basketball game Saturday, Jan. 12, 2019, in Berkeley, Calif. (AP Photo/Ben Margot) 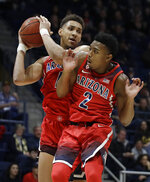 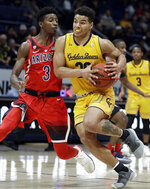 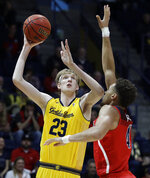 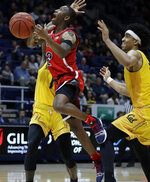 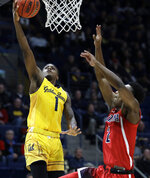 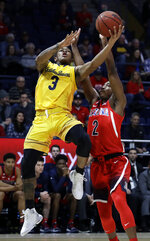 The Wildcats (13-4, 4-0 Pac-12) found their rhythm late in the first half, taking a 12-point lead into the break and then turning the game into a rout in the second half as they extended their winning streak to six games.

Jeter, a 6-foot-10 transfer from Duke, added nine rebounds and Brandon Williams scored 16 points for Arizona, which has swept Cal and Stanford in each of its past three trips to the Bay Area.

"We scouted a lot for how (Cal) plays defense," Jeter said. "They're still a great team, but we were able to pick apart their defense a little bit, especially in that zone."

Justice Sueing tied his career high with 27 points to lead Cal. The Bears (5-11, 0-4) were anticipating a boost from the return of leading scorer Paris Austin, but the point guard was held to eight points and two assists on just 2-for-8 shooting.

Cal, which has lost five straight, shot just 34.5 percent (20 for 58) from the field. But coach Wyking Jones was most concerned about his team's defensive effort throughout the night.

"Before the game, I challenged our guys to pick up their sense of urgency defensively," Jones said, "and just for whatever reason, we didn't have it tonight. . We have to improve our sense of urgency on the defensive end. It's a major, major problem for us right now."

Arizona made just five of its first 15 shots, but then Jeter began having his way inside and his teammates heated up on the perimeter.

The Wildcats scored points on 21 of 23 possessions for a stretch that bridged the first and second halves.

Arizona got the Bears in early foul trouble and took advantage, hitting 10 of 11 from the free throw line and taking a 40-28 halftime lead.

Arizona: After a narrow win over Stanford that came down to the last minute, the Wildcats got a well-rounded team performance to remain unbeaten in the conference.

Cal: The Bears need to rework Austin into their offensive attack and find an interior defensive presence if they're to turn things around in the win column.

Arizona closed the first half on a 12-4 run, including an accidental tipin from Cal center Connor Vanover just before the buzzer, and the Wildcats were in control from that point on.

Ira Lee threw down a tomahawk dunk midway through the second half and celebrated while looking toward his Arizona teammates on the bench.

Sueing after his career-best 27-point effort: "Regardless of how I performed, it wasn't good enough and it doesn't matter because we lost the game."

Arizona returns home Thursday to host Oregon, which plays USC on Sunday before its trip to the desert.

Cal plays Thursday at Washington State, which is winless over its first three conference games.