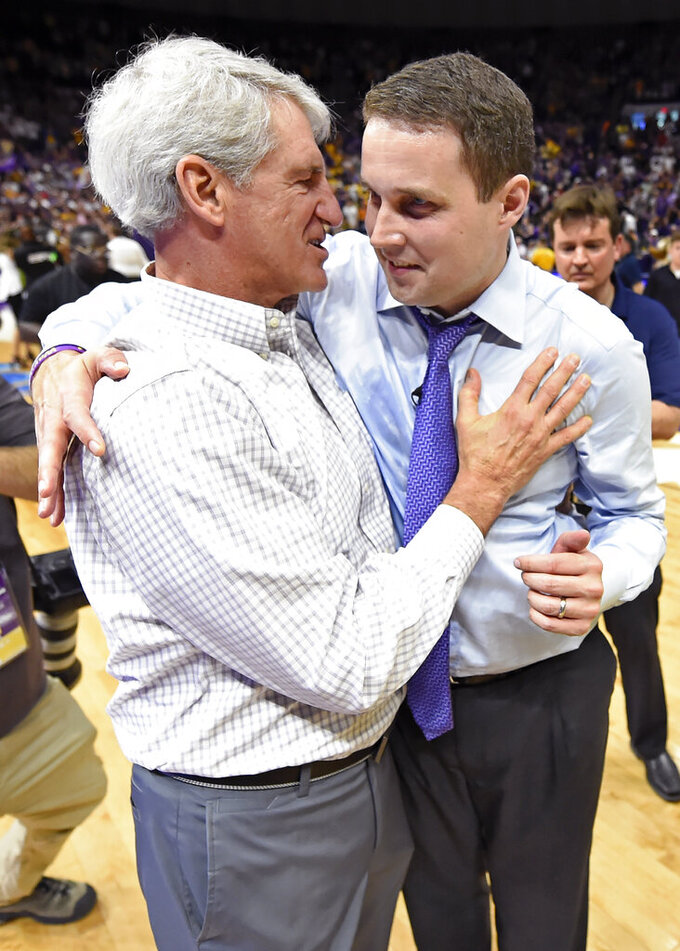 FILE - In this Feb. 23, 2019, file photo, LSU athletic director Joe Alleva, left, hugs and has a word with LSU basketball coach Will Wade after an NCAA college basketball game against Tennessee in Baton Rouge, La. Alleva is stepping down as AD and will have a new role within the school's athletic department. The school announced Wednesday, April 17, that Alleva's new position will be as special assistant to the president for donor relations. He will remain LSU's athletic director until a successor is announced. Alleva has been LSU's athletic director since April 2008. (AP Photo/Bill Feig, File)

BATON ROUGE, La. (AP) — LSU athletic director Joe Alleva is stepping down from that position and will have a new role within the athletic department.

The school announced Wednesday that Alleva's new position will be as special assistant to the president for donor relations. He will remain LSU's athletic director until a successor is announced.

Alleva has been LSU's athletic director since April 2008.

"We have made lifelong friends and memories in Louisiana," Alleva said in a statement released by the university. "This is truly a special place. It's been an honor to serve LSU, and I am proud to continue to do that in a new role."

This move comes three days after Alleva announced the reinstatement of recently suspended men's basketball coach Will Wade, who led LSU to a Southeastern Conference title this season.

Wade's punishment followed a Yahoo report about leaked excerpts of an FBI wiretap that captured the coach speaking with a person convicted funneling illegal payments to the families of college basketball recruits. Wade was reinstated after speaking to LSU and NCAA officials.

Alleva said Monday that Wade had "answered all questions and denied any wrongdoing in connection with recently reported allegations of irregularities in college basketball recruiting."

The graduation success rate for LSU student-athletes improved each year from 2008-17.

"We are grateful to Joe for his years of service and dedication to LSU," LSU President F. King Alexander said in a statement. "Under his leadership, LSU Athletics has become even more nationally competitive and our student-athletes have reached new levels of academic achievement."

Alleva also was athletic director during the tumultuous final stages of Les Miles' tenure as the Tigers' football coach.

LSU lost three straight games late in the 2015 season as rumors swirled about Miles' job security. After LSU beat Texas A&M 19-7 in its regular-season finale, Miles was carried off the field by LSU players amid reports their coach was about to lose his job.

In a stunning move, Alleva announced after the game that Miles would be back the following season. Then he did fire Miles early in the 2016 season after LSU split its first four games.

Alleva replaced Miles with Ed Orgeron, who has gone 25-9 since.

Before coming to LSU, Alleva had been Duke's athletic director from 1998-2008.