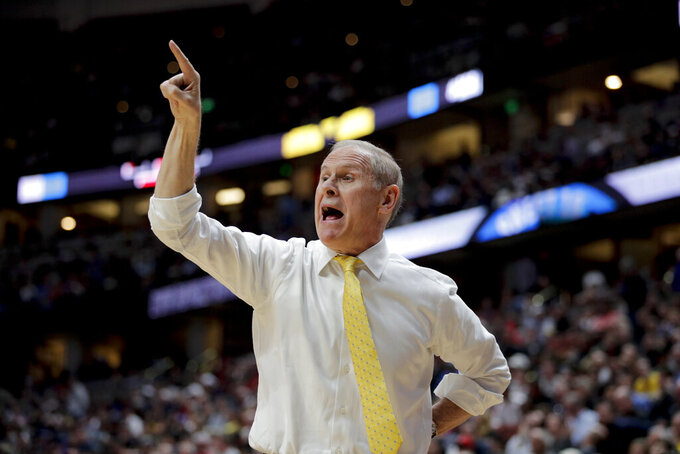 FILE - In this March 28, 2019 file photo, Michigan coach John Beilein shouts during the first half of the team's NCAA men's college basketball tournament West Region semifinal against Texas Tech in Anaheim, Calif. Cleveland has signed Beilein to a five-year contract, three people familiar with the decision told The Associated Press on Monday, May 13. The deal came together quickly in the past 24 hours and was finalized Sunday after the Cavs had spent the weekend in Denver interviewing several NBA assistants. The people spoke to The AP condition of anonymity because the team had not announced the hire. (AP Photo/Jae C. Hong, File)

ANN ARBOR, Mich. (AP) — John Beilein called it a heck of a ride.

That felt like a typical understatement from Michigan's outgoing coach.

Beyond all the wins, the conference titles and the NCAA Tournament runs, Beilein's basketball team became an embodiment of the way so many Michigan fans like to feel about their athletic programs. Successful but unassuming. Competitive but free of scandal.

Beilein had the respect of the college basketball world long before he took over in Ann Arbor, but for a dozen years, he and Michigan felt like a perfect match. The Wolverines had a coach who turned the program into a national title contender again, and Beilein had a chance to challenge himself on one of the sport's biggest stages.

Now, he's headed to an even higher level of basketball, jumping from college to the NBA. The Cleveland Cavaliers hired Beilein to be their new coach Monday, and the outpouring from Michigan was as expected.

"I was saddened when John told me this morning of his decision to leave Michigan for a head coaching position in the NBA. However, I am incredibly thankful for his 12 years of service to this university," Wolverines athletic director Warde Manuel said. "Above and beyond being our all-time winningest coach, John is a tremendous role model for the game of college basketball."

By the time Cleveland announced the hire, Beilein had already tweeted his thanks to the Michigan community.

This wasn't the first time Beilein's name surfaced in connection with a job in the pros. He had talks with the Detroit Pistons last year, but he said he was never offered that job. Beilein also had health issues last year, undergoing a double-bypass operation in August.

His college career has included far more than just his success in Ann Arbor. He won 829 games in 41 seasons, reaching the NCAA Tournament with Canisius, Richmond, West Virginia and the Wolverines.

Beilein went 278-150 in his 12 seasons with Michigan, and he would react to success with unflinching modesty. In 2017, CBS Sports asked over 100 coaches which high-major coach they believed "does everything by the book and operates completely within the NCAA's rulebook." Beilein finished first in the poll.

"He's the blueprint for what you want in college basketball at the Division I level today," said Bill Martin, a former athletic director at Michigan and the man who hired Beilein in 2007. "You really have to get somebody who is the right fit for your institution, and I followed John for a couple of years before I hired him. ... I loved not only his creativity and success on the basketball court, I liked the way he handled himself on the sidelines, his demeanor. I liked the way he handled himself in his press conferences."

In many respects, Beilein's program became a model for what Michigan fans desperately want their football team to be again. Even after hiring Jim Harbaugh, the Wolverines haven't been able to beat Ohio State in football, and they've continued to lose their share to Michigan State. It became common for Beilein's basketball team to lift spirits in Ann Arbor after the end of football season. He seemed to have little trouble meeting or exceeding expectations.

Beilein more than held his own against Michigan State's Tom Izzo while the two rival coaches maintained a healthy respect for each other.

When he arrived at Michigan for the 2007-08 season, the Wolverines hadn't made the NCAAs since 1998. They made nine appearances under Beilein, reaching the Sweet 16 five times and the national championship game in 2013 and 2018. They lost to Louisville and Villanova in the title games.

"We have achieved great success together, and we could not have done it without the incredible support of our administration, coaches, players, staff, students, fans and the entire university community," Beilein said. "We shared some of the best moments of my life together, and I will always be grateful for that."

The Wolverines won Big Ten regular-season titles in 2012 — their first since 1986 — and 2014, plus conference tournament championships in 2017 and 2018. Toward the end of his run, Beilein shored up the Wolverines' only major deficiency after some changes to his staff: Michigan was one of the top teams in the country at the defensive end over the past couple seasons.

The Wolverines were hurt by early departures to the NBA. Players like Trey Burke, Tim Hardaway Jr., Nik Stauskas and Moe Wagner all left with eligibility remaining. This offseason has been no different. Charles Matthews, Jordan Poole and Iggy Brazdeikis all declared for the draft.

But now Michigan's challenge is much bigger than replacing a few players.

Beilein never won a national title at Michigan, but the same could be said of Bo Schembechler. That one empty spot on his resume won't do much to detract from Beilein's legacy in the college game.

Now the attention turns to Manuel, who has the difficult task of finding a suitable replacement.

"My priority now is to commence a full national search for our next basketball coach," Manuel said.