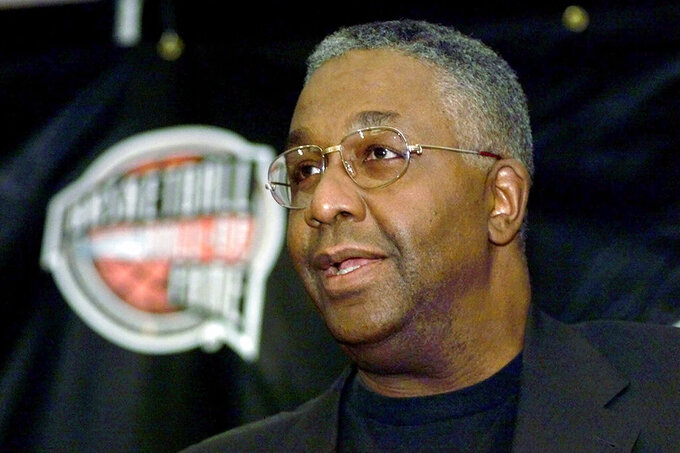 FILE - In this Oct. 1, 1999, file photo, former Georgetown basketball coach John Thompson addresses the media during a news conference for inductees to the Basketball Hall of Fame in Springfield, Mass. Thompson is being remembered not only as a basketball coach but as someone who reshaped lives. He was recalled during a virtual memorial Saturday, Oct. 3, 2020, in which former President Barack Obama was among those who spoke. The 78-year-old Hall of Famer died Aug. 30, (AP Photo/Charles Krupa, File)

WASHINGTON (AP) — Former President Barack Obama remembered John Thompson not so much as a basketball coach but as someone who reshaped lives.

“What made coach Thompson special, what compelled us to celebrate his life today, is what he did to build young men,” Obama said Saturday.

Thompson’s life was honored during a virtual memorial. It was held in conjunction with the Georgetown University and the Thompson Family and through Facebook Live.

The 78-year-old Hall of Famer, who coached Georgetown from 1972 to 1999, died Aug. 30. He was described by those who knew him best -- players, colleagues and others in the community -- as a leader, mentor and social activist.

Obama was one of the first speakers, and he rattled off the names of Hoyas greats Patrick Ewing, Dikembe Mutombo, Alonzo Mourning and Allen Iverson.

The former president spoke of the boycott Thompson took in 1989 against NCAA Proposition 42 after he felt it was biased against underprivileged students. He referred to the time that year Thompson met with a local drug kingpin who was believed to be fraternizing with his players.

“He was brave then and it’s astonishing in hindsight. We haven’t banished injustice from our society, far from it,” Obama said. “But we are living through a golden age of young black activism. We’re living through a golden of activism on the basketball court, too,” Obama said. “Coach Thompson didn’t like it when people called him a pioneer but there’s no doubt his example has echoed down the generations. There’s no doubt his imprint endures.”

Ewing, who was Thompson’s star player on the 1984 national championship team and is now the current Hoyas coach, started out a theme of the afternoon which was the tough love shown by the 6-foot-10 coach who strolled the sidelines with his signature white towel over his shoulder for three decades.

“I felt like I’ve lost a father,” Ewing said. “I know he’s in heaven looking down on me cursing me out like he does from time to time but also with pride in the work we’re doing here.”

Knight said he knew Thompson in a variety of ways for over 50 years and wanted him early on to be the first African-American on his board of directors when Nike went public because he knew nobody would take him as a token.

“John proved to be a great member and he had a great insight,” said Knight. “He wasn’t just a basketball coach he contributed enormously to society in total.”

Thompson’s Hoyas would be one of Nike’s signature teams as he served on the board for 30 years.

Thompson was there is the early days of the Big East Conference. Among his coaching rivals was Boeheim of Syracuse.

“He always will be Big John,” Boeheim said. “I’m just proud I had the opportunity to compete against him for so many years.”

Despite retiring as a coach after 27 years, Thompson never left Georgetown and put in 48 years at the school.

Georgetown President John DeGioia described Thompson as one of the most influential figures in school history.

“He led us to a place where we might be better able to live up to our ideals,” DeGioia said.

“He had a very different idea of what it meant to be a head men’s basketball coach," DeGioia said. "He demanded the best of us and brought out the best of us. He held us true. We were privileged to be at Georgetown at the same time that John Thompson was here. We are the university that we are today because of John Thompson.”